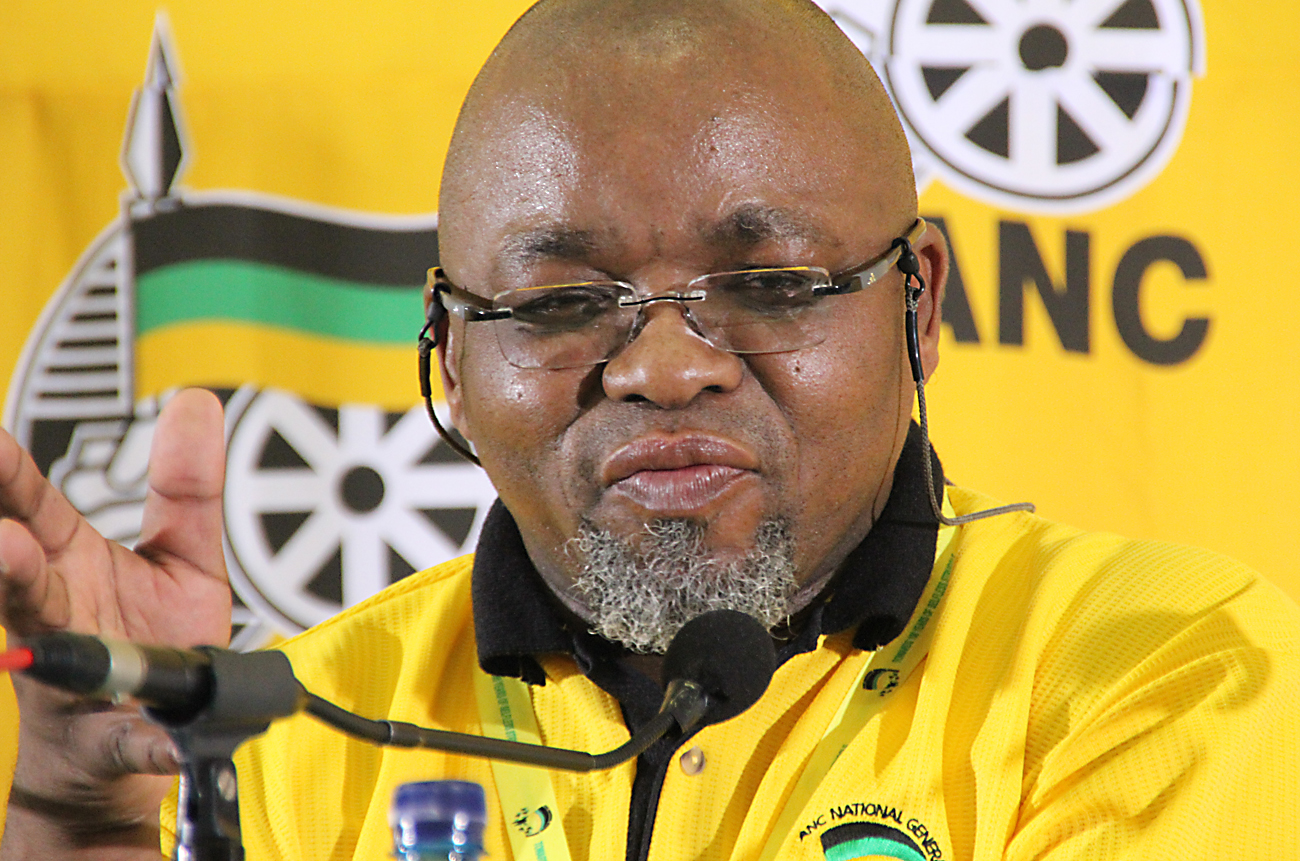 You’re probably aware by now, the race for the ANC’s leadership battle next year is now well underway. And that means balancing an unwieldy, overly ideologically broad party that it is, is getting more difficult. And for the national working committee, that means its statements become less and less specific. It also means that for ANC secretary-general getting away without saying who you back, is now nearly impossible. By STEPHEN GROOTES.

There’s nothing quite like the 11th  floor of Luthuli House just before a Gwede Mantashe press conference. The radio and TV people set up, the twitterati cuss over their 3G connections, there’s a long involved negotiation over the two plug points in the room, and the SABC is usually late. Press conferences after a national working committee are rare, so when one was called on Tuesday, at a time of much talk about Jimmy Manyi, there was a little bit of speculation. Or idle gossip if you prefer. You could hear who was reciting parts of Trevor Manuel’s open letter to Manyi, the gasp when they got to the bit about “what did you do in the war Jimmy?” and the part about “Apartheid thinking”. Whatever announcement was to be made, the Manyi story was going to be part of it.

And we weren’t disappointed. It was, predictably, quite broad, but the intent was clear. The NWC “further appealed to all ANC members to stop and refrain from behaving as if they are free agents who speak as individuals, reflecting comments that are not informed by policy.” Bang! And Trevor’s on the floor ladies and gentlemen, while Jimmy’s running around in his corner waiting for the count! There really is no other way to interpret it. Of course, there was the usual question, “Do you mean Trevor Manuel?”. He was ready, of course. “I mean everyone who’s entered the fray.” While this is bad news for Manuel, it could also mean he’s getting off with just a slap on the wrist. We may have to wait for this weekend’s national executive meeting to be sure.

For Manyi though, there was more good news to come. Firstly, Mantashe says calls to fire him are “misplaced…because no one has questioned his competence”. Oh, come on, Gwede, that’s not the issue and you know it. Then just hours later, the minister in the presidency who is close to President Jacob Zuma (Collins Chabane, not the other one…Manuel) issued a statement saying Manyi would stay on in his job where he gets to speak for cabinet. All of Cabinet. Including Manuel.

It really is an interesting illustration of how politics works in this country. Last week, after the publication of the Manuel letter, you couldn’t get a minister to comment on this for love or money. Suddenly the NWC meets, and Manyi gets cabinet’s full backing. It really is just about politics, and who is in favour and who is not. Sorry, we didn’t mean to sound surprised.

Mantashe says the NWC is now fully satisfied with the explanation from Zuma and labour minister Mildred Oliphant that the new Employment Equity Amendment Bill will make it easier for employers to decide whether to use regional or national demographics when hiring workers. This is rubbish. The NWC and Zuma are saying that in the current legislation there is a reference to “national or regional demographics” and that this has been removed completely. That is true. The new Bill refers to the “demographic profile of the economically active population”. Full stop. That’s it. Which means if you own a factory in Western Cape, your workforce has to reflect the “demographic profile of the economically active population”. As the South African Institute for Race Relations’ Anthea Jeffrey pointed out on the 702′ Midday Report on Tuesday, a judge would have no option but to rule on what the law actually says and not on what politicians say about it. Which gives Manyi’s comments that there “is an over-concentration of Coloureds in the Western Cape” some very real expression.

So then, what is really happening here? Was the law badly drafted? Possibly. Are we being lied to? Perhaps. Has the ANC written off Western Cape yet? They should now. Despite government’s protestations that “no clause gets into a Bill by accident”, we seriously hope that’s the case here. When dealing with politicians, it’s usually better to assume cock-up rather than conspiracy. But not always.

Mantashe also had plenty to say about the Guptas. That family Julius Malema has tried to claim is perhaps influencing Zuma. Of course, Malema has slightly back-tracked on that. Mantashe says ,“In my own view, I think some of this is about racial prejudice”. He believes that there wouldn’t be such a stink if it wasn’t for the fact the Gupta family are from India “and don’t look white enough”. Huh? So Cosatu’s racist then? Okay, Gwede, if you say so.

But what’s really happening is that Mantashe’s real agenda is beginning to show. He needs Zuma. And so, to protect him, he’s moving the goalposts, finding a good controversial reason for everyone to move the story on, just slightly. It’ll probably work too, because now everyone will be talking about how dare he accuse them of racism, rather than on the real issue at hand.

For the next few months, the ANC, and the NWC will have to focus on the local government elections. So the gloves will stay on. But already there are signs of some inner ructions. And for Mantashe, the job will just get harder from here on in. But he may well win another term. If he wants it, that is. DM