Cricket World Cup: A loss against England is never funn...

Cricket World Cup: A loss against England is never funny, but that was no choke 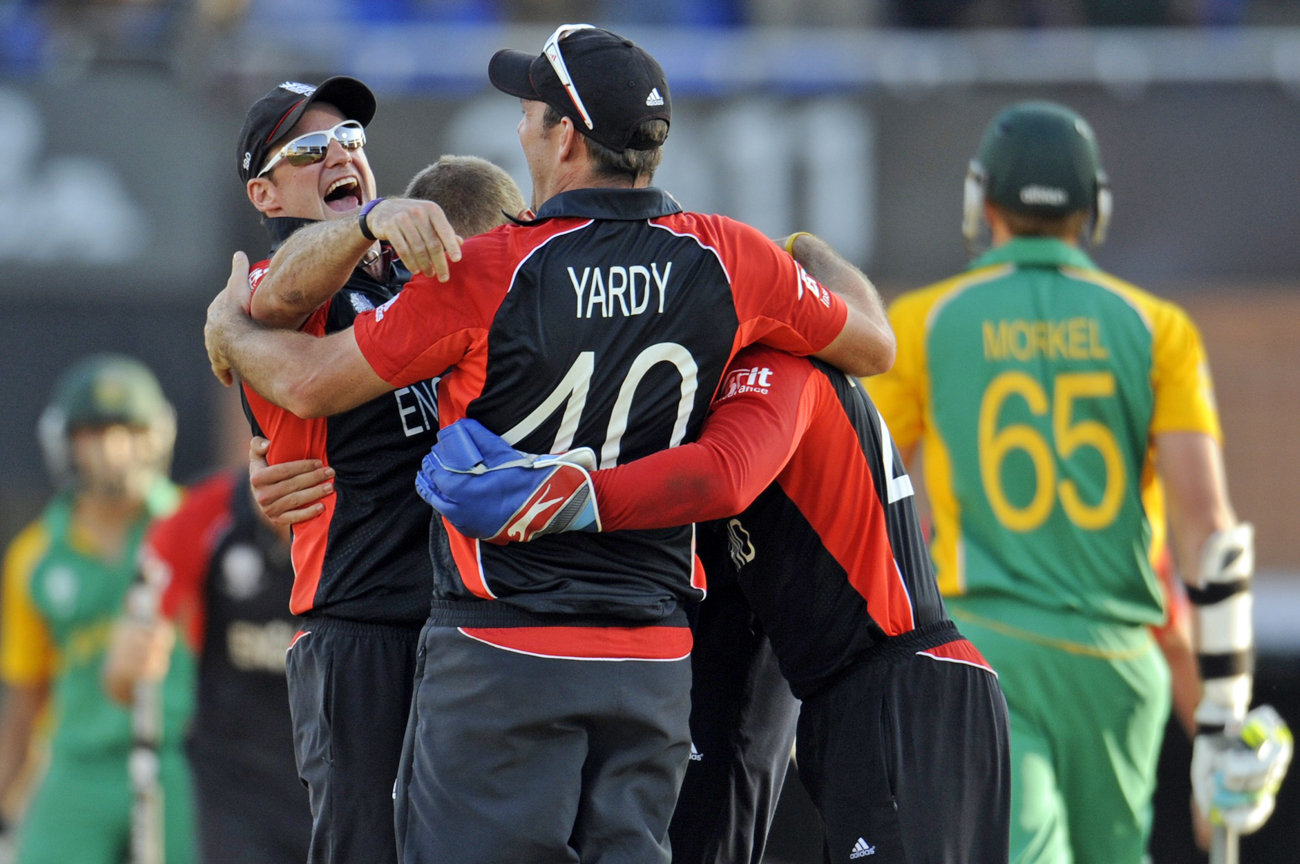 Yes, you’ll hear the c-word now, but SA didn’t choke against England on Sunday. We made a silly mistake on a tough Chennai pitch. Like MacArthur, we will be back. Get over it. By SIMON WILLIAMSON.

England won a tight game as Stuart Broad removed South Africa’s two best players and the scrapping tailenders who took the Proteas so close in pursuit of 172. South Africa, at one point, were sitting comfortably at 124/3 with AB de Villiers and Faf du Plessis both set, but the English effort removed both and continued to make inroads as the Proteas lost their last seven wickets for 41 runs on a difficult pitch.

South Africa’s spinners once again led the charge with Robin Peterson dismantling the English top order reducing them to 15/3 and Imran Tahir nabbing another four wickets to push his tournament  tally up to 11. An authoritative bowling performance, again justifying the exclusion of Johan Botha, restrained England to 171 after they had won the toss and elected to bat.

Graeme Smith’s imaginative captaincy continued early in the game, but vanished as, inexplicably, the part-timers, Faf du Plessis and JP Duminy, were given too many overs (nine costing 36) as Jonathan Trott and Ravi Bopara both scored 50s in England’s fightback. These were to cost South Africa.

Smith was also criticised for his use of pace-bowlers on such a spin-friendly wicket, but Morné Morkel and Dale Steyn took three wickets between them, and bowled 16 overs  at 3.3 an over. The part-time spinners together went for four an over and took no wickets. A six – the margin of victory – off Duminy seemed to wake Smith up and he brought his best bowlers back who bowled England out with four overs to spare.

South Africa’s innings started well, although Smith could not have looked more out of form. Graeme Swann bowled him some deliveries which were virtually unplayable.  Finally, Smith nicked one which Prior claimed and Amla fell soon after for 42 off 51 balls when he chopped on off Stuart Broad. Broad also accounted for Jacques Kallis who nicked behind, and this was also only the first half of Broad’s damage.

Another piece of clever captaincy took place when Smith sent Faf du Plessis in to bat at No. 5 instead of Duminy. This meant that off-spinner Swann was immediately whipped off and saved for when left-handed Duminy came in. It also meant De Villiers and Du Plessis could both begin their innings against the part-time off-spin of Kevin Pietersen rather than the expert tweaking of Swann. De Villiers and Du Plessis put on 42, but Anderson ended the partnership with a beautiful ball which bowled AB. Swann came on immediately and three balls later Du Plessis was run out. Duminy got bowled through the gate by Anderson in the next over and suddenly the Proteas were in very  deep shit. South Africa plummeted from the driving seats to 124 for six with 48 still required.

Peterson joined Van Wyk , but fell to Yardy when he tickled one through to Prior. South Africa required 30 off the last 10 overs and the batsmen, Van Wyk and Steyn, slowly began to eat into what was required, including a beautiful straight hit by Steyn for four. Swann’s dreaded last over went off without incident, but the Power Play was mandated in the 46thover with 15 required. Bresnan removed Van Wyk with a clever piece of bowling.

Eight runs were required off the last three overs with two wickets in hand and Steyn faced up to Broad who nipped him out lbw with the first ball of the over. In came Tahir, who displayed why he bats 11 with an ugly hack for a single. And then Broad cleared up any tension as he bowled one which Morné Morkel feathered through to Prior, and I hurt my hand as I punched the table on which my computer sits. England had bowled South Africa out for 165, winning by six runs, with a superb bowling performance.

That c-word is going to be thrown around, but I don’t think it is deserved here. We weren’t under pressure when the collapse started. In fact, we were ahead. We lost it at the end when the pressure was really on because our lower order was batting on a difficult pitch. The job of scoring runs should not be left to Peterson, Steyn, Morkel or Tahir. We also (and this was clearly highlighted) missed the calm, strong and smart head of Mark Boucher, who would have been playing instead of Van Wyk and is an expert at batting with the tail.

If we were to search for where we could have done better, it was in England’s innings when the part-timers bowled for far too long and we conceded needless runs.

Blaming “choking” would also detract from Stuart Broad’s superb bowing performance. He is a tricky customer on pitches which do a bit, and gets reverse swing. While he may not be the sole reason for England’s win, but certainly deserves credit for being the biggest challenge to the South African chase.

All is not lost. South Africa should still go through to the next round comfortably with fixtures against India , Ireland and Bangladesh remaining. If we are to take anything from this game it is to keep our foot clamped on the opposition’s throat when we’ve got them down. And that lesson can only improve us. DM