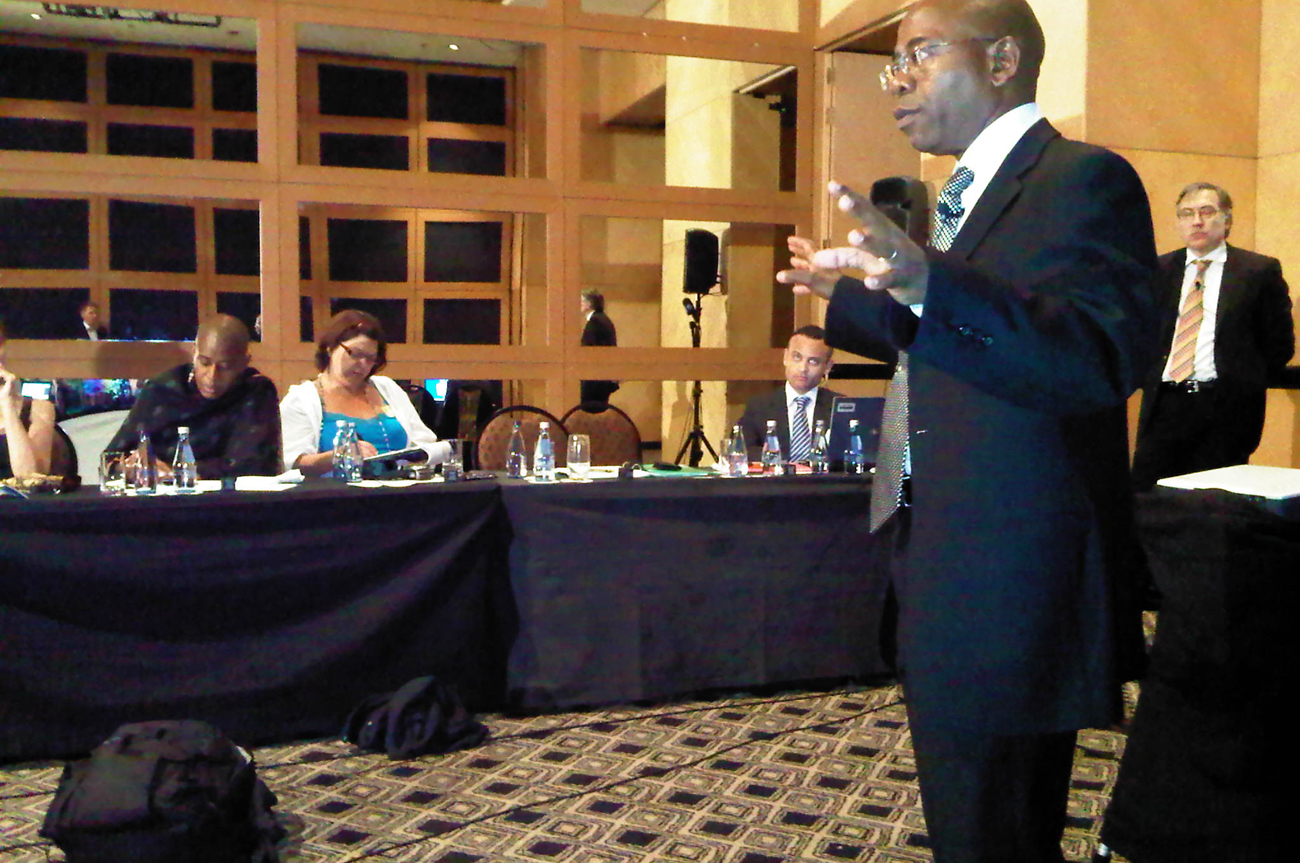 Royal Dutch Shell, a global corporation the size of a small nation, is facing a growing outcry against its plans to conduct hydraulic fracturing in the Karoo. Still, it took on a  “frack now, deal with any fallout as it happens” stance at a press conference on Thursday. And although compensation promises were made, it is nothing you can take to the bank. By SIPHO HLONGWANE

Royal Dutch Shell went to some effort to make the process of hydraulic fracturing seem rather harmless to a roomful of journalists, with a friendly PowerPoint presentation, full of bullet points and video that explained the process. The process of fracking has received an avalanche of bad press in the US, leading to precautionary banning in some states, and now Shell wants to take the controversial process of mining unconventional gas to the Karoo.

Bonang Mohale, chairman of Shell Oil Product Africa, and Graham Tiley, general manager of New Venture Executions at Shell are hosting press conferences in Cape Town, Port Elizabeth and Johannesburg in an effort to allay fears about the process.

At the Johannesburg presentation on Thursday, they did not allay the biggest of the concerns. Could Shell categorically state that the chemicals pumped into the ground as part of the fracking process would not make it into the groundwater acquifers? Mohale said the shale levels they intended to frack were typically 2,500m to 4,000m underground. Groundwater acquifers are typically no less than 500m deep. The massive amount of rock between the two levels would act as a natural barrier, Mohale said. “But ‘categorically’ is a difficult word”, he said “Never say never,” Tiley added.

Shell promised to “commit to disclosing the fracturing fluids at each drilling station”. But they would not say at the press conference what the chemicals pumped into the ground were, with Tiley saying that the exact cocktail was different at each location. According to their presentation, some of the chemicals were reducers, biocides, corrosion inhibitors, scale inhibitors, surfactants and breakers, which certainly made you, and all the Karoo farmers, feel good by now.

The community shouldn’t worry about water either, Mohale assured us. Shell would “engage” with the community to determine which water sources they would use. Water is the biggest waste product in the process, he said, but more than 50% of it is recycled and maybe could even be purified for human and animal use. “We promise not to compete with the people of the Karoo for their water needs,” Mogale said, a statement of painful ambiguity; it would remain to be seen who would define already thirsty Karoo’s people’s water needs.

Mohale was at pains to stress that the entire process was still in its relative infancy. Shell’s application for a licence was accepted by the Petroleum Agency South Africa on 14 December last year. As part of the licence application, an environmental management plan (now available on the website of Shell’s partner Golder Associates, according to Tiley) has to be submitted, and a draft was ready as of 2 March. Pasa will study the EMP, and will make a decision on granting Shell exploration rights on 12 August. “If everything goes according to plan, [exploration] drilling should start in the latter part of 2012, with fracturing starting in 2013,” Tiley said.

Shell intends to sink 24 wells in an exploration area which stretches from Sutherland to Somerset East, at a typical cost of $15 million each.

Of course, we should not worry about what impact the fracking process would have on the Square Kilometre Array project, especially after Mogale assured us the drilling process, where presumably the greatest amount of disruption would occur, would only take weeks. But Shell would keep up a dialogue with “all affected and interested parties”, including the SKA project.

Shell would commit to “full compensation to any landowner with documented direct negative impact or loss on their land as a result of our activities”. It is a canny wording from Shell, because in America, the country where fracking has come under the greatest controversy, the main negative impact has been contaminated water. Even if the chemicals found in tap water were identical to the fracking cocktail, how can anyone prove causation between the two without looking underground? And documenting it? It would be like trying to find someone who farted in a crowd, and spending millions of dollars on it.

To hear Shell tell it, South Africa desperately needs fracking. Not only are we in danger of rolling blackouts, the situation in the Middle East makes the immediate future of oil very uncertain. Besides, the process could make us competitive in the foreign direct investment market. Furthermore, the process could create local jobs, according to Mohale, who, predictably, wouldn’t commit to any figures, vaguely stating that Shell wants to hire locals for the periphery functions, like hydrology and road-building.

Mogale did stop short of promising unicorns and eternal rainbows, rather disappointingly.

And if you, as a Karoo landowner, are still unhappy, then go ahead, sue Shell. The exact quote by Mohale, in an answer to a question about why a member of the Dutch royal family (and a Royal Dutch Shell shareholder) was complaining about the fracking process, was, “The sister to the princess of the Netherlands has a democratic right to say ‘no drilling in my back yard’.”

We expected Shell to take on a patronisingly bullish tone on the issue of fracking, and they did not disappoint. We would not have put it past a vastly rich oil company to confidently welcome lawsuits, and they did not disappoint in this area either. Despite their “trust us” tone (maybe even because of it), Shell have only served to heighten the worries of just how little there is in this for locals, and just how shatteringly expensive the fracking will turn out to be for the Karoo and South Africa. DM

Read more: Royal Dutch Shell really wants to frack up the Karoo in The Daily Maverick.