‘Slay you, slay me’ – when Lionel Richie sang for Muammar Gaddafi 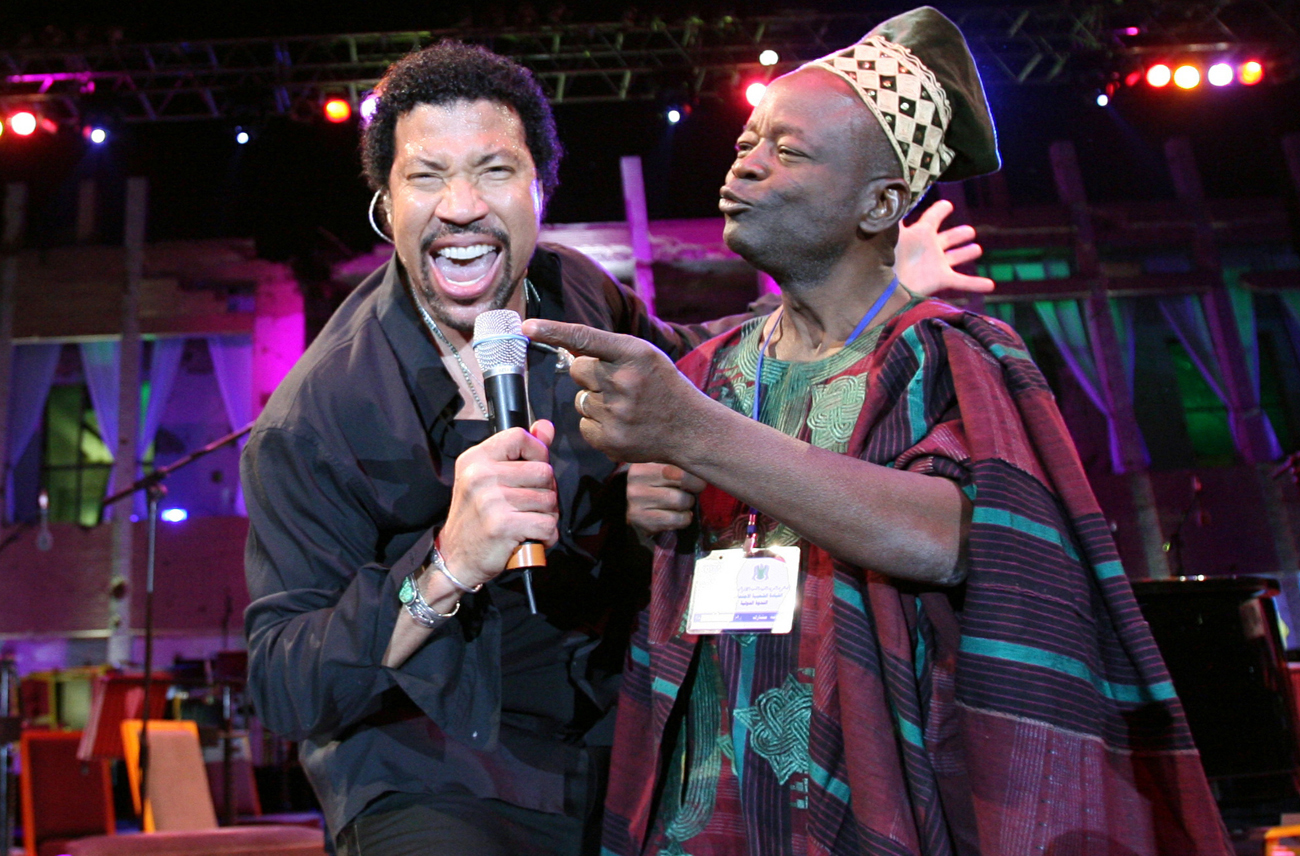 It’s hackneyed to say fame is a fickle game, but stardom carries with it all manner of stellar stuff – star endorsement, star support and star association. Tyrants since well before Hitler’s operas at Berchtesgaden knew the value of having the “big names” play for them. But when the true nature of the beast lurches into view, payback is a bitch. By RICHARD POPLAK.

On Monday, Canadian singing sensation Nelly Furtado, she of “Promiscuous” and “Fly Like a Bird”, tweeted the following: “In 2007, I received 1million$ from the Qaddafi clan to perform a 45 min. Show for guests at a hotel in Italy. I am going to donate the $.” Her fans—and she has almost 2 million followers on the social networking site—could be excused for being a little stunned; her tweet history is prosaic in the extreme. (“@Rock_Kel HAPPY BIRTHDAY!!!!!”)

It’s emerged recently that a number of big-name stars have taken money from the Gaddafis. No story, however, is odder than Lionel Richie’s.

At midnight on 14 April 2006, a convoy of late-model vehicles approached al-Aziziyah, the Gaddafi compound in Tripoli, from the northwest. Armed guards opened the gates, swinging flashlights into the cabins, checking papers. Mercedes and Lexuses and Lincolns purred inside, followed by buses packed with dignitaries, foreign and otherwise. There was a festive element to the proceedings. The Colonel has a propensity for marking dates—the Libyan calendar is littered with commemorations revolutionary, religious or otherwise—and 15 April is now remembered as Hanna Peace Day. As gate after gate opened to allow revellers closer to the epicentre, spotlights flashed wildly across the night sky, a clownish aping of the anti-aircraft lights that vainly followed F-111 bombers 20 years earlier.

A crowd numbering 1,000 assembled before The Colonel’s devastated house. Wires dangled from the still-scarred concrete. A concert stage was set up: grand piano, electric guitars, microphones. The crowd politely applauded as Spanish tenor José Carreras took to the stage. After his brief set, Aisha Gaddafi—The Colonel’s other, living, daughter—stood before them. Once considered “the Claudia Schiffer of the Middle East” for her model-like mien and hallmark blond highlights, she had of late taken the headscarf. Beneath the skeletal remains of the building in which little Hanna breathed her last, Aisha said, “Today we try to heal our wounds and shake hands with those who are here with us tonight. Yes for peace! No for destruction!”

The stage darkened. Lights swung back and forth. Then all went quiet. And 20 years to the very second after Ronald Reagan’s bombing campaign Operation El Dorado Canyon swept over this place, an icon of the 1980s, one-time member of R & B supergroup The Commodores, 90 million solo records sold, more than a dozen Top 10 singles on the Billboard charts, stalked into the spotlight, a smile on his face, the velvety Mediterranean breeze fluttering his navy-blue shirt.

“Hello Libya!” said Lionel Richie. He then broke into the first of five smash hits on his set list, culminating in a rousing sing-along, with 40 white-clad children typical to this sort of proceeding. “Hanna will be honoured tonight because of the fact that you’ve attached peace to her name,” Lionel Richie told the crowd. “Libya, I love you! I’ll be back.” The gig was a coup of a different sort for Libya, a country only recently upgraded from pariah status, due to The Colonel’s renouncement of WMDs, terrorist fellowships, bad hairstyles and so on. By all accounts Richie’s arrival was greeted with the rapture befitting a visiting deity. His hands had been washed in rosewater, he’d been accorded the honorific “Brother”. The take-home message was that the man who wrote “Dancing on the Ceiling” was a greater nuncio for peace—or at least common ground—than any number of official envoys, roadmaps or summit meetings.

Nobody I met in Libya in 2007 wanted to talk about the concert. Culture was a dirty word, a realm either co-opted by the Gaddafis to push their version of quiescent American-style suburban consumption, or dismissed by conservatives, who saw it as an invasion of the dangerously foreign, a bid to denude Libya of Islam. Most young Libyans I encountered saw American culture as an escape hatch, a place to live in the world apart from the humiliations and compromises that were the daily stock of their time under The Colonel’s thumb. The Amazigh in particular, who have always been tacitly opposed to Gaddafi, had more cultural affinity to east-coast hip-hop than North African Arabs.

That said, Richie’s visit presents some interesting conundrums. For decades, local strongmen have invited the world’s glittering superstars to perform at private parties. These events take place in the shadows for numerous reasons: The fear of Islamist furore, natural strongman paranoia and an impulse to seem less flighty and more conservative. But it is also in the star’s interests to keep them on the QT. Most major music acts are, for all intents and purposes, corporations. Managers have the task of booking gigs and ensuring a steady cash flow. Too few questions are asked. Private concerts, on the super-yachts or in the compounds of the vastly rich and relatively innocuous (Warren Buffet, say) or the dazzlingly wealthy and thoroughly nefarious (the Gaddafis, for instance), are treated as corporate gigs. They are never announced, undertaken in secret and never reviewed.

Mostly, this is because Beyonce, who has also played for the Gaddafis, or Christina Aguilera, or Lionel Richie are brands. They are often the official face of other brands, and the rules of brand synergy are such that nothing may tarnish their collective image for fear of losing millions of dollars of endorsement contracts and a few million customers besides. Beyonce, who has shilled for squeaky-clean Pepsi, cannot be seen consorting with murderous dictators. Pepsi, meanwhile, cannot hand out free cola to thirsty baby seal hunters. Thus, the star’s management companies prepare contracts that are elephantine in sweep and scope, often including non-disclosure agreements. Unenforceable for the most part, but if you hope to keep the confidence of the likes of Muatassim Gaddafi, you’d best know how to keep your mouth shut. Sheikh Khalifa of Bahrain; Jim Balsilie of Blackberry—what’s the difference? If everybody keeps shtum, everyone goes home happy. And stars are significantly richer for it. Photo: Aisha Gadaffi, daughter of Libyan leader Muammar Gadaffi, speaks before the start of a concert in front of the ruined home of her father in the Libyan capital of Tripoli April 14, 2006. REUTERS/Ahmed Jadallah

In Lionel Richie’s case, he seems genuinely to have fallen for the Hanna Peace Day guff. Any concern he may have felt was no doubt eased by $5 million he was paid for the gig. In many respects, you can understand Richie’s position. For one thing, five large is five large. For another, in 2006, three years after the invasion of Iraq, many Americans found themselves profoundly alienated by their government—as ambivalent to George W Bush as they were to his enemies. Without a sophisticated moral compass, it was hard to know who the bad guys were. What’s more, it was open season for business in the Middle East, and five decades of cold war pragmatism had inured us all to the notion of dealing with devils to make a little baksheesh. The rules of global capital being what they are, no one, except maybe the Ayatollahs of Iran or the Kims of North Korea, was dirty enough to turn down for dinner. Richard Nixon once famously called capitalism “amoral”.  We’ve proved him wrong.

But Lionel Richie is not an oil company. He’s a performer. And his cache is such that those common Libyans who did hear about the concert had another reason to exercise their sense of humiliation and disenfranchisement. By showing up in Libya and playing for the regime’s court  Richie, had unwittingly, given the Gaddafis a sheen of legitimacy. At the same time, he gave ammunition to the conservatives, who could further preach the fact that Gaddafi was a stooge of the West. In other words, Richie’s very presence in the country fomented a highly divisive cultural debate. He was, by virtue of being there, destabilising.

This is not to say that Lionel Richie caused the revolution in Libya, although I have long felt that American pop culture has played a socially transformative role in the region. But we do need to acknowledge the fact that big pop acts are a special sort of business, and they need to take that specialness seriously. Naïveté won’t do when you’re Beyonce, because to get rich and famous she’s spat hundreds of thousands of cultural moments into the atmosphere, those moments have connected with people and cultures, and changed them. Is Beyonce a feminist icon in the UAE? Sort of. But not in the way Germane Greer was a feminist icon, or in any way traditional feminists would recognise. But she has changed the way Arab women see themselves and she will contribute to eventual social change, for better or for worse. She thus needs to be very careful about whom she calls her friends.

Nelly Furtado’s gesture—the tweeted promise to “donate the $”—is a fine one. Hopefully more stars will follow her lead. Mostly, one hopes that what arises from the revolutions in the Middle East, after stable and responsible governments are in place, is an elevated understanding of how culture is shared and how profoundly it affects us. By associating with Gaddafi, Beyonce and Furtado and Richie have rubbed their stardust on him. Now, they must help scrub it off. It’s going to cost them big $. DM

Main photo: U.S. singer Lionel Richie (L) sings with Dominique Balouki of Togo in front of the ruined home of Libyan leader Muammar Gadaffi in the Libyan capital of Tripoli April 14, 2006. With Gaddafi’s home as a backdrop, Richie jived and rocked for an adoring Libyan audience in a concert to mark the 20th anniversary of a U.S. raid on the North African country. Reuters.