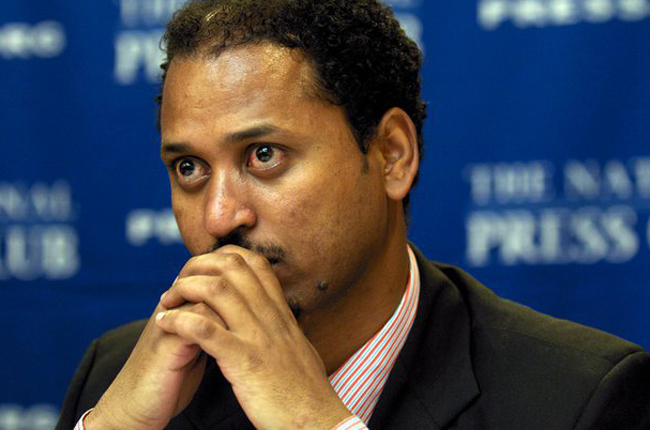 In spite of spending almost two years in the most appalling conditions in an Ethiopian prison cell with 350 inmates, Dawit Kebede is unbowed. Jailed for speaking out against the Meles Zenawi government, Kebede continues to fight for constitutional rights and democracy by running Ethiopia’s last remaining independent and critical newspaper. By MANDY DE WAAL.

The 21 months that Dawit Kebede spent in a jail cell with 350 other prisoners in Ethiopia is a stark reminder of that country’s assault on press freedoms. Kebede’s crime was that he wrote an editorial criticising his government following the post-election violence that swept Ethiopia in 2005. Many journalists were detained at that time and some chose exile after being freed, but not Kebede. When the editor-in-chief of Ethiopia’s only independent, political newspaper was released he waited two days and then petitioned the federal government headed by Meles Zenawi for a license to continue running his newspaper.

“The two days after my release were a Saturday and Sunday, so on Monday I went to the minister of information to reorganise my newspaper,” says Kebede from Ethiopia. “Unfortunately they were not happy when I asked them and they didn’t want to offer a license. I explained that it was my constitutional right to exercise my profession, but it took nearly six months for the government to make a decision and then they denied us a license.” Kebede’s an expert on the constitution in Ethiopia. He wrote to Zenawi to challenge the decision and was granted permission to publish once more.

“We started the Arwamba Times in 2008 and till today this remains the only newspaper critical of the government. It is the only newspaper that speaks about issues that relate to the rule of law, constitutionality and questions state operators about the development of democracy.” The Arwamba Times is a voice in the media wilderness in Ethiopia because most local newspapers have chosen to forgo challenging the government and focus instead on sports or entertainment. “We currently publish 15,000 copies a week which means that Arwamba Times is the second largest newspaper in the country. The biggest newspaper reports on entertainment.” Kebede says the climate in Ethiopia is still one of fear. In part this fear is fuelled by the memory that in 1995 Zenawi’s regime massacred 193 protesters who were rallying against elections that were neither free nor fair.

“The people were peacefully protesting the elections and they died, and as editors we were asking why these people died when they were protesting peacefully. I was arrested together with the head of the coalition opposition for alleged involvement in subverting the constitution. The funny thing is that our constitution clearly states that no one may lose their lives unless they are punished by judicial organs. It was based on that principle that we tried to criticise the government’s action which was not in favour of democracy,” says Kebede. “The government needed to explain why people lost their lives in an action that was unconstitutional.” But Kebede received no answers. Instead he was given a life sentence and thrown in prison with some 15 other journalists from eight local newspapers.

Today, while Kebede is out of jail, he isn’t a free man because he works under a presidential pardon which means his freedom remains threatened. Despite this, he remains fiercely critical of the government and won’t leave Ethiopia unless his life is under threat. “I have no choice in terms of staying or going. I have to do something in my life and contribute to the development of Ethiopian democracy and because of this I cannot leave my country or go into exile. I may have freedom when I am in exile, but staying here and exercising my professional duty is a greater freedom for me.”

Kebede’s current fight is against the country’s state-owned newspaper Addis Zemen which has been publishing false criminal allegations against the Arwamba Times. This is just one of the government tactics to try to stymie Kebede’s paper, which enjoys huge popularity. “One of the strategies of the ruling party is to undermine commercial advertising for those newspapers that criticise the government. There is a climate of fear so the business community is reluctant to advertise their products in critical press. They say they love what we do, but can’t advertise because the government would not view this kindly and it would hamper the way they do business in Ethiopia,” says Kebede. The government also limits international support by decreeing that local organisations have to be 90% funded by local business.

Kebede remains unflinching and continues to face-off against the tyrants. “What the government does regularly is create repressive legislation so that the development of democracy is discouraged. You don’t have the right to criticise certain political groups and as a newspaper all the government wants from us is to publish state press releases.” The punishment for contravening tough press laws is as much 25 years in prison. However, the laws are vague and open to interpretation which makes it easy for the government to make a case and in Kebede’s instance, push for sentences as severe as life imprisonment.

Where does Kebede’s passion and courage come from? “As a child of three or four I remember sitting with my father as he listened to the Voice of America.” It was his father’s curiosity and need to find the truth by listening to satellite news programmes on radio that fired Kebede’s initial imagination. The will to report the truth was cemented by a government that remains in power in Ethiopia and refuses to engage in a discourse about fundamental human rights or democracy.

Kebede’s uncommon courage saw him honoured with the 2010 Committee to Protect Journalists’ International Press Freedom Award. Courage exemplified by the words he used in accepting the award: “Here are three things people should know about me. First, it is impossible for me to live without the life I have as a journalist. Second, unless it becomes a question of life and death, I will never be leaving Ethiopia. Third, I am not an opposition. As a journalist, whatsoever the governing regime in Ethiopia, I will never hesitate from writing issues criticizing it for the betterment of the nation.” DM