Oscar night: And the Whatsithingee goes to...

Oscar night: And the Whatsithingee goes to… 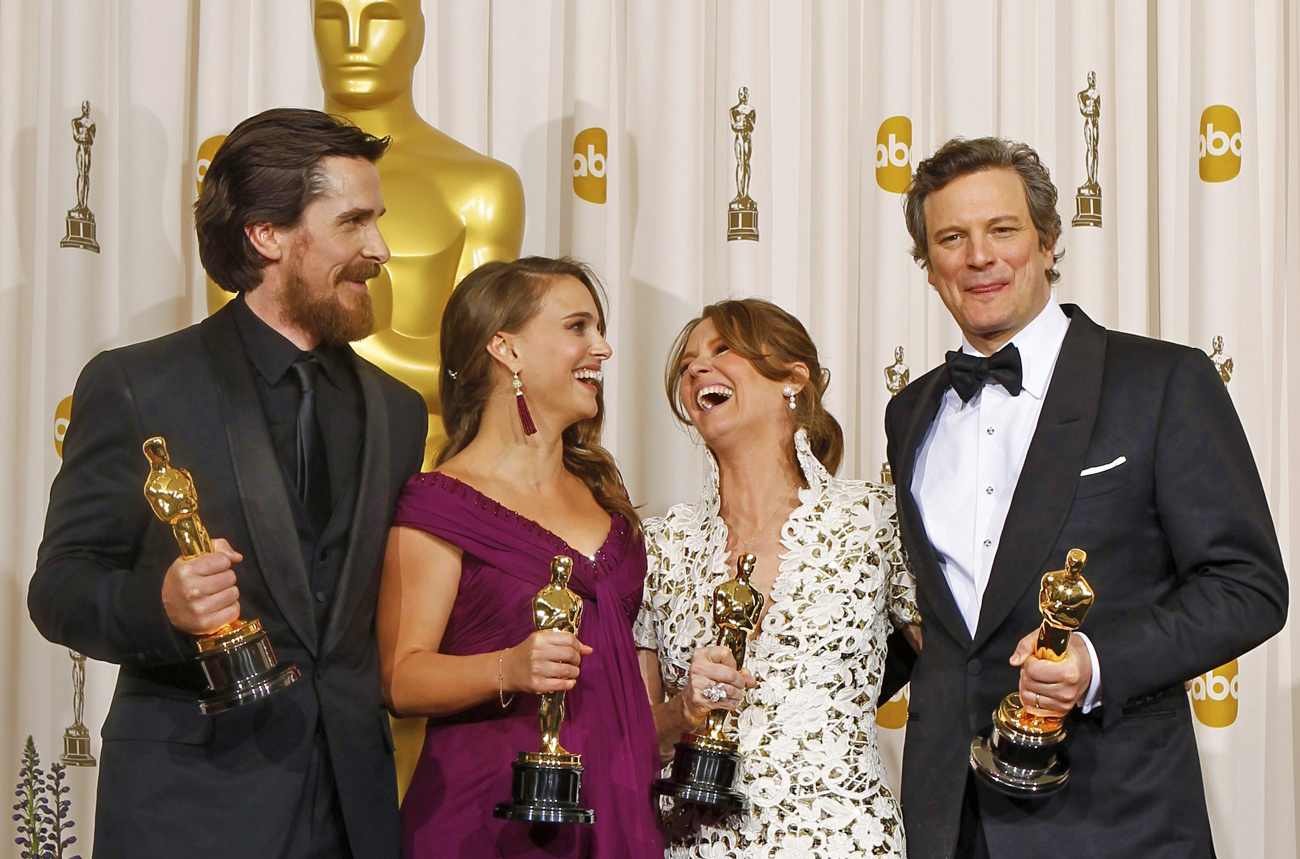 In the interests of hard journalism, The Daily Maverick has dispatched one of our stable of gonzo journos to cover the 83rd Annual Academy Awards ceremony. Have we sent our fearless correspondent to Los Angeles, put him up in a Holiday Inn Express and bought him a red carpet pass? Don’t be silly. He’s in a small, cold apartment in Toronto, watching it on TV with the rest of the plebs. By RICHARD POPLAK.

Some quick scene setting: I’m sitting on a bare hardwood floor, enjoying the benefit of stolen cable and a TV signal that does a fine impression of a snow storm. My companions are a commercial airline pilot named Dave, who loves Star Wars, and a writer/translator named Medeine, who is setting up a new Blackberry. Both appear entirely uninterested in the proceedings. There is Scotch, some wine and no snacks. This is a sad, sad little Oscar party and the evening will be faithfully depicted on this page, with a minimum of meddlesome editing.

8:30 EST: The jokey opening sequence is underway; Anne Hathaway and James Franco are gamely trashing their cache. It’s an Inception-themed story line, unnecessarily starring Alec Baldwin, bafflingly segueing into a Back to the Future gag. Luckily, we have Scotch.

8:46 EST: Alice and Wonderland just won for something? Did I just fall down the rabbit hole?

9:02 EST: Mila Kunis has just outstoned James Franco. This really is the “younger demographic” Oscars. Love to see what they’ve got in that green room behind.

9:06 EST: The producer of Toy Story 3 is trying to sound surprised that he won in the Best Animation category. Toughest job in Hollywood.

9:27 EST: In a Better World, from Denmark, wins best Foreign Film. The clip shows black children in an African setting. Should be good for local tourism.

9:32 EST: “A room full of talented people, and what the hell am I doing up here in the midst of you?” A sound question by Christian Bale, who just won for his supporting role in The Fighter.

9:39 EST: ABC flacks currently informing the world that they’ve bought the rights to the Academy Awards until 2020. I’m riveted.

9:43 EST: Whoa! Trent Reznor and Atticus Ross just won Best Score for The Social Network. In this journo’s opinion, the best piece of film music since Clint Mansell’s score for Requiem for a Dream. 9:45 EST: “I am six degrees of Kevin Bacon away from our next two presenters. Look it up on the Internet.” Franco’s stock falls further.

9:49 EST: Inception currently tearing it up in the sound categories.

9:55 EST: James Franco is slurring. But then again, so are we here at Oscar HQ.

9:56 EST: Rick Baker just won for Best Makeup on The Wolfman. Geeks across the world are currently setting off very small fireworks.

10:01 EST: Best Song performances. President Barack Obama makes a brief cameo. This would be crushingly depressing if it weren’t for the fact that a Hollywood star successfully ran the free world back in the eighties, and apparently saved us all from the godless commies. No one in Tinseltown lets you forget that. Some best songs are sung. Makes you wish the commies had won.

10:19 EST: Oprah presents the Best Documentary category, probably because of her tireless work in journalism? Something called Inside Job wins. Images suggest it’s a Financial Crisis film.  Greed is not good.

10:27 EST: Billy Chrystal is on stage. Dude is kicking it. Shame the “younger demographic” doesn’t get him. He is followed by a Bob Hope hologram. “Ladies and gentlemen,” says Bob, “welcome to the Oscars. Or as it’s called in my home, Passover.” Franco, are you taking notes?

10:41 EST: Franco just upped his game, and cracked me up with a bit about the offensive titles in the Best Film category: “Winter’s Bone? Rabbit Hole? How to Train Your Dragon? That’s disgusting.” Guess he’s off the OxyContin.

10:47 EST: Randy Newman wins Best Song for “We Belong Together”, featured in Toy Story 3. Another rebel co-opted by the dream-making machine.

10:52 EST: Dead stars montage. Forced to turn down schmaltzy music. Thing about the Oscars—they don’t push unearned sentimentality at all, do they? Shortly followed by Halle Berry, also heroically stoned, who talks about Lena Horne, who “paved the way for those of us who walk in the sun today.” Presumably a shout out to minority actors.

11:02 EST: Tom Hooper wins Best Director for The King’s Speech. Undramatically, he doesn’t stammer, although there is a note of breathlessness in his address.

11:10 EST: Trying to think up synonyms for “interminable”.

11:14 EST: Grizzled Jeff Bridges is handing out the Best Actress Award. Looks like he just crawled out of Saddam Hussein’s hidey-hole. Frontrunner Natalie Portman front-runs. Thanks parents, business advisors, friends, colleagues. Avoids politics. A lesson in controlled Oscar speechifying. If you’re planning in winning one, this is the young lady you need to learn from.

11:20 EST: Sandra Bullock, handing out the Best Actor statuette. Awkward, because James Franco is up for an award. In a shock to bookies in Snelsa, Outer Mongolia, Colin Firth wins. “I have a feeling my career has just peaked,” says he. At least until The King’s Rap comes out. Hey, why not? This is the “younger demographic” Oscars, ain’t it?

11:36 EST: It wearies me to report that The King’s Speech has just won Best Picture. Please scroll up to “younger demographic” references, scattered throughout ceremony, and commence ironic laughter. That’ll rate a sweep.

11:39 EST: Clocking in at 3:10, unfocused and unfunny—but comparatively short—we’re done. The hype for the 84th Academy Awards ceremony officially begins now. For us, here at The Daily Maverick Oscar HQ, it’s bedtime. Dave has a plane full of people to fly, Medeine has words in Lithuanian to translate, and I have…well, I have next year to look forward to. DM

Ed’s note: Dear reader, we apologise for this completely rude and uncalled-for review. Where our deeply troubled North American correspondent saw a somewhat hazy picture of tired, depressed and stoned people high on hallucinogens, we saw unicorns, rainbows and strawberry fields forever. But We at The Daily Maverick South Africa believe in free speech. Sorta.