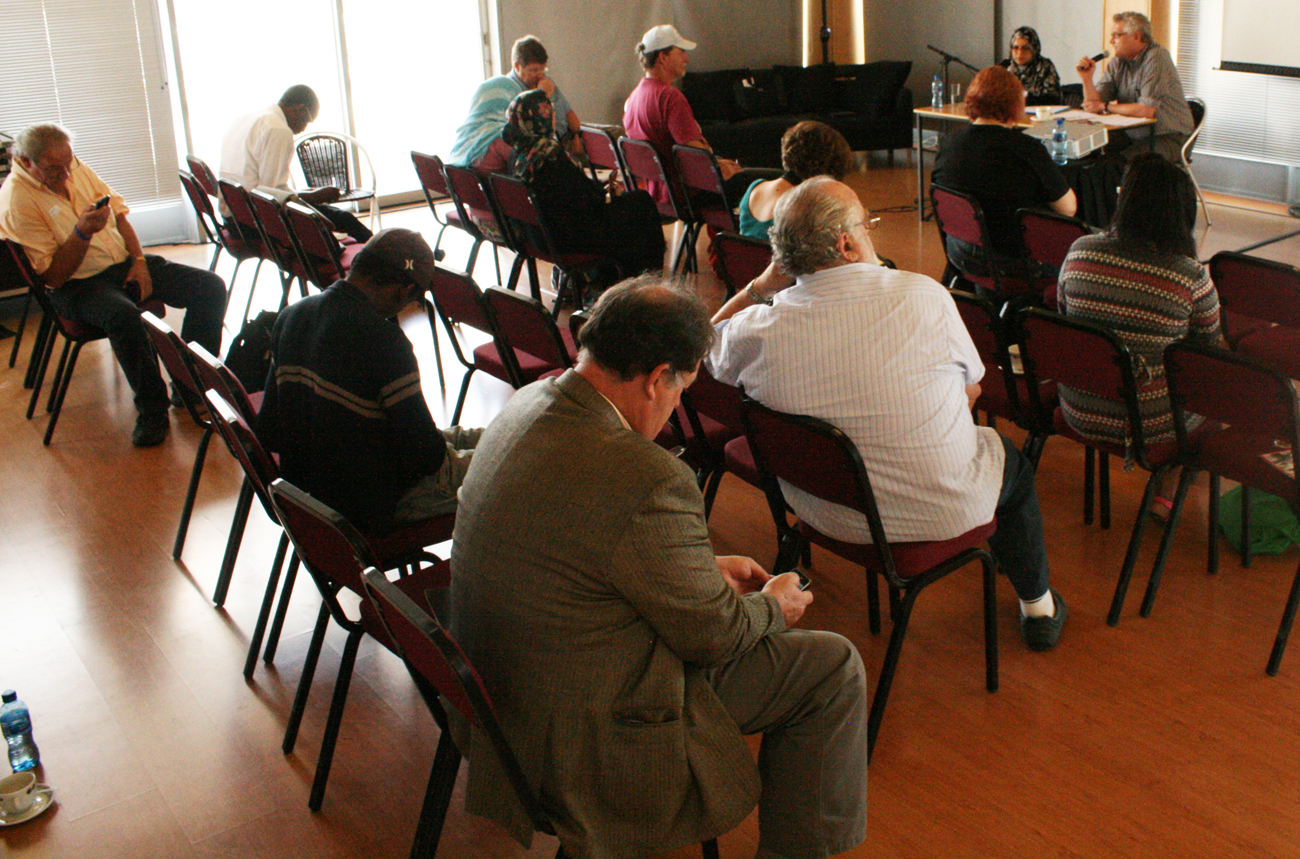 We hope you're not getting bored with stories about the lack of public participation at Press Council hearings being held around the country. But we can't report on all the interesting points the public is making if they simply don't exist. At least in Cape Town on Thursday the Muslim Judicial Council aired its views – but that was about it. Again. By TO MOLEFE.

The latest leg of the Press Council public hearings began in Cape Town on Thursday to a room of at most eight people – a stark contrast to events such as the one held last year at the Book Lounge in the city. That event was convened by Idasa and others to discuss public sentiment around the media appeals tribunal and the Protection of Information Bill. It was standing-room only on that occasion and some people even listened from the pavement outside.

Thursday’s hearings kicked off with presentations from Ralf Will of the Swift Photo Agency and Gill Moodie, a freelance reporter. The third presentation by the Muslim Judicial Council, represented by Nabeweya Malick, was the day’s saving grace.

It brought to the fore pertinent issues around how members of the public, in this case the Muslim community, feel about the ways in which they are portrayed in the press. It also highlighted concerns around how the public feels when engaging with the Press Ombudsman. This surely is what the Press Council was after when it set up the public hearings, and is the perfect defence against a media appeals tribunal. If the council can effectively demonstrate that a broad cross-section of the public, who the ANC alleges will be protected by a media appeals tribunal, had a say in reforming the Press Code, then there can be no argument for setting up such a tribunal.

The Muslim Judicial Council’s presentation was the first from any of South Africa’s religious organisations. Malick called the Press Council’s general processes “slow” and said the Muslim Judicial Council preferred to deal directly with editors, as it did with Nic Dawes of the Mail & Guardian over Zapiro’s depiction of the Prophet Muhammad. She called for the council to hold workshops with editors every six months on topical issues or those that come up persistently during the ombudsman’s adjudication processes. She also said that distrust – or perhaps a lack of understanding of the press ombudsman’s adjudication process – existed and called on the Press Council to do more to make the public aware of what the process entails through hosting radio and TV shows. Repeatedly, she asked that the Press Council ensure that differences, including religious ones, are respected and that the press present news fairly and in a balanced manner.

Most of Malick’s criticisms were answered by deputy press ombudsman Johan Fourie, who said: “The Press Council lacks capacity.” Freelance journalist Raymond Joseph said: “The [capacity] problem can be solved with more money.” If self-regulation is the route, he said, the money can only come from one source. Question remains though if the country’s media houses are prepared to fork out to fund an expanded council.

Opposing views were expressed in the day’s other presentations. Moodie felt the ombudsman did enough to rein in bad journalism, but Ralf Will said the ombudsman should be “given real teeth”. He also said it should have special powers to investigate censorship by government and parastatals.

These three presentations were the sum total of public input on Thursday. It’s said before, but we’ll say it again: the Press Council public hearings, held as part of its review of its system, have so far been a damning indictment on the state of the print media industry in South Africa. Only a small sector of journalists, academics and civil society organisations have actively participated in making submissions and attending hearings. The rest – editors, political parties (especially chief accuser, the ANC) and the general public – have been conspicuously absent from the process in general and the hearings specifically.

What is most alarming about this is that an otherwise flatfooted ANC may become as fleet of foot as Fred Astaire under Broadway lights when compared with how defensive it has been lately over how journalists present stories and which stories editors take to print. It is likely that, if the hearings carry on as they have done so far, without broader participation, the ANC will have an easy beat to dance to as it ushers in a media appeals tribunal on its own terms.

Fourie suggested Thursday’s event had been well publicised and that the absence of members of the public may in part be due to apathy. He did concede, however, that the Press Council could have done more to generate greater public participation and support, including using social media channels. The Press Council has had a Twitter account since 16 February, but no Facebook page.

Fourie also asked: “Where are the editors?” His contention was that it is editors who stand to lose the most should this process to reform the Press Council’s systems fail and a media appeals tribunal be instituted. He said Press Ombudsman Joe Thloloe had distributed a press release on the hearings to Sapa, which then distributed it to all major news outlets. The expectation was that editors would then sound a clarion call for members of the public and others to participate in the hearings so that as broad an audience as possible was heard. This, however, does not appear to have happened to any marked degree.

Taryn Mackay from the office of the ombudsman said that a separate event, to be held in conjunction with the South African National Editors Forum, was in the works. Unfortunately, this may end up reinforcing the idea that South African editors are not interested in directly hearing the public’s views on the state of journalism in the country. Mackay also said that after the initial poor showing in Johannesburg, more had been done to make the public aware of the subsequent hearings, including the ombudsman giving interviews to community radio stations and newspapers.

There was also a noticeable lack of political party representation. The Press Council had asked the ruling party to make a submission, however, the ANC replied wishing the council “luck” in this endeavour. The DA, who last year staged protests in Cape Town and Johannesburg against “apartheid censorship”, were also absent from today’s hearings. To the knowledge of the Press Council’s representatives, the DA had yet to make a written submission. When I spoke to DA spokeswoman Lindiwe Mazibuko, she said the party would be making a written submission, but emphasised that this review process should focus on gaining input from the public and should not be dictated by political parties. The local ANC’s Songezo Mjongile said the ANC’s process in this regard would be coordinated centrally and would follow the “legislative route”. What that means exactly is, of course, anyone’s guess.

The sole political party to have asked to make a presentation is the Pan-African Congress, which is expected to do so at the Durban leg of the hearings, which begin on 3 March. The Press Council will be accepting written submissions until 15 March. What’s unclear at this stage is if there remains time and resources enough to involve as broad an audience as possible. Greater public participation can only help in constructing a self-regulation system robust enough to stave off regulation by outside bodies. DM

TO Molefe is a freelance writer on Twitter at @TOMolefe.

Photo: TO Molefe for The Daily Maverick.