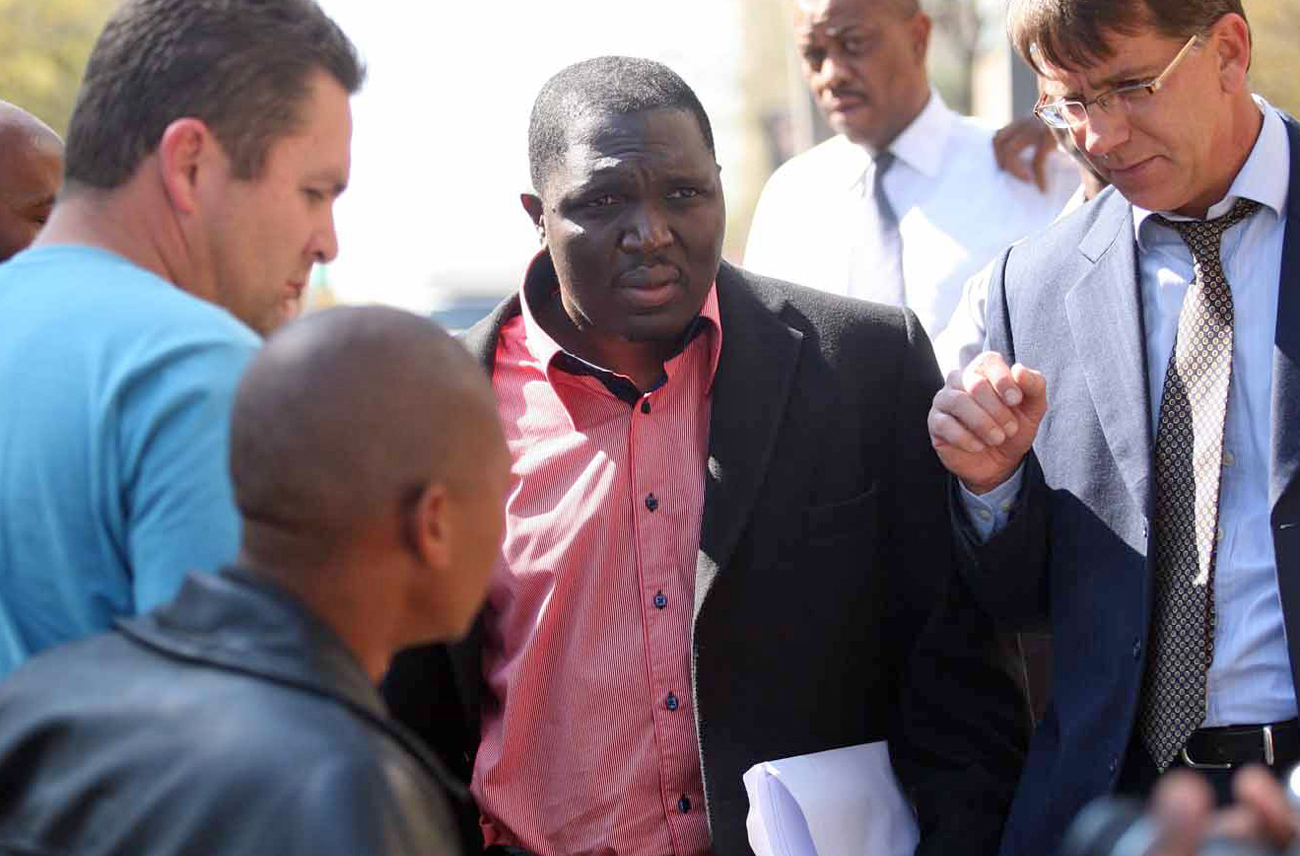 To date, there is no direct evidence to prove that breaking the story about police commissioner General Bheki Cele’s R500 million bad property deal led to the arrest of Sunday Times investigative journalist Mzilikazi wa Afrika. But after all the attacks by the police chief the two reporters endured, it must have felt good for Wa Afrika and his investigative partner Stephan Hofstätter to hear the public protector’s damning report on the General. And it will not end there. By MANDY DE WAAL.

“We received a tip-off that the police commissioner and top brass were planning to relocate and immediately started to cultivate sources and figure out how to firm up the story,” says Hofstätter. Wa Afrika is currently not speaking to the media as he is investigating legal action against the SAPS following his arrest just days after the Cele story broke in the Sunday Times. Hofstätter and Wa Afrika often collaborate on stories and worked together to expose the SAPS head’s bad property deal.

“We received documentation that confirmed the tip-off and started looking at deed records to see who owned the building to get clarity on why the police were required to move. The old building the police were in belonged to the Encha Group.” Owned by the Moseneke family, The Encha Group was founded by Tiego Moseneke and has investments in oil, gas, property and technology.

While it is spurious to assume the Mosenekes’ closeness to Mbeki resulted in the Encho Group losing the lucrative SAPS property lease, it is interesting to note that the Sunday Times’ story revealed the 18-storey Pretoria building the SAPS was to move into is owned by Roux Property Fund which belongs to billionaire property tycoon Roux Shabangu. In an interview with Sunday Times  Shabangu said he was a close friend of Jacob Zuma, but denied the friendship was related to the deal.

“After the story broke, Cele called a press conference and was fixated on the fact that we said he had signed the lease when he hadn’t. He harped on about the terminology and why he as the head of police couldn’t sign a lease. He also referred to us as ‘shady’ journalists and specifically named Mzilikazi.” Hofstätter says Cele would go on to repeat these allegations in Parliament.

Soon after Wa Afrika received a call and was informed that he was to be arrested for fraud on a matter related to a fake resignation letter from Mpumalanga Premier David Mabuza sent to President Jacob Zuma. Wa Afrika and Hofstätter found the news of the arrest incredulous. “We joked that Mzi would make a great media freedom martyr and that it was a great time to be arrested.” The next morning Mzi was contacted to say the police were on their way to arrest him, and the journalist started walking to the police station.

“After that Mzi just disappeared and we now know he was arrested, asked political questions, but that the prosecutor threw the docket out because it was inappropriate. We can’t link the two events because we can’t prove anything, but it is fairly interesting that Mzi’s arrest came shortly after we broke the Cele story,” says Hofstätter.

After Wa Afrika’s arrest, the pressure was on the investigative journalists to confirm the Cele story. “We ended up with a comprehensive paper trail and with information from various officials in public works who questioned why procurement procedures hadn’t been followed. We also discovered there wasn’t a budget for this deal and how Cele himself drove the process,” says Hofstätter.

Wa Afrika and Hofstätter had much of the source documentation on the deal and were aware that this was sent to the public protector, so they weren’t surprised at Madonsela’s findings. Hofstätter says what was heartening was the conviction with which the public protector delivered her findings. “I don’t recall the public protector being that emphatic about wrongdoing at such a high level before. It was gratifying to see that she confirmed what we had been writing about and it was a vindication after the endless media campaign on behalf of Bheki Cele to vilify Mzi and myself.”

Hofstätter says the Cele influence has had a chilling effect on the investigative team’s sources. “People feel communications aren’t safe and that they are being followed. When police chiefs have press conferences to discredit journalists and make the media out to be shoddy and corrupt, it makes our jobs harder. When he vilifies sources and says they are going to be investigated, it makes it increasingly difficult for whistleblowers to come forward.

“This was a high-profile game to smear us and our sources by someone (who is) in a position of considerable power to discredit anyone who would say anything negative about the SAPS. It is designed to intimidate, and yes it does feel intense, but it only served to spur us on to get to the bottom of the story.”

Hofstätter is gratified that throughout the drama he and Wa Afrika felt completely supported by the Sunday Times and editor Ray Hartley. “Ray was very measured, but forthright in his response. If there was any hesitancy or equivocation, it could have sent the wrong message. If the newspaper was hysterical, it could have sent the wrong message. He has been unequivocal in his condemnation of the matter.” Hofstätter says Wa Afrika was also gratified that Avusa spared no expense to find out where he was and send lawyers to assist him.

And what of the story? Well it isn’t over yet, according to Hofstätter, who says the public protector’s announcement is only the end of one chapter. “This report is only about the building in Pretoria. A similar process was followed for the police headquarters in Durban and in some ways that was worse because the building was worth less and the lease worth more. To justify the move to the new building, the SAPS proposed moving crime intelligence and child protection units from township communities into the city building. The question is obviously: Won’t these units be better placed in the communities (that) they serve?”

That story by Hofstätter and Wa Afrika in Sunday Times this weekend promises to be an interesting read indeed. DM