Of the power of speech and dictators who lost it

Of the power of speech and dictators who lost it 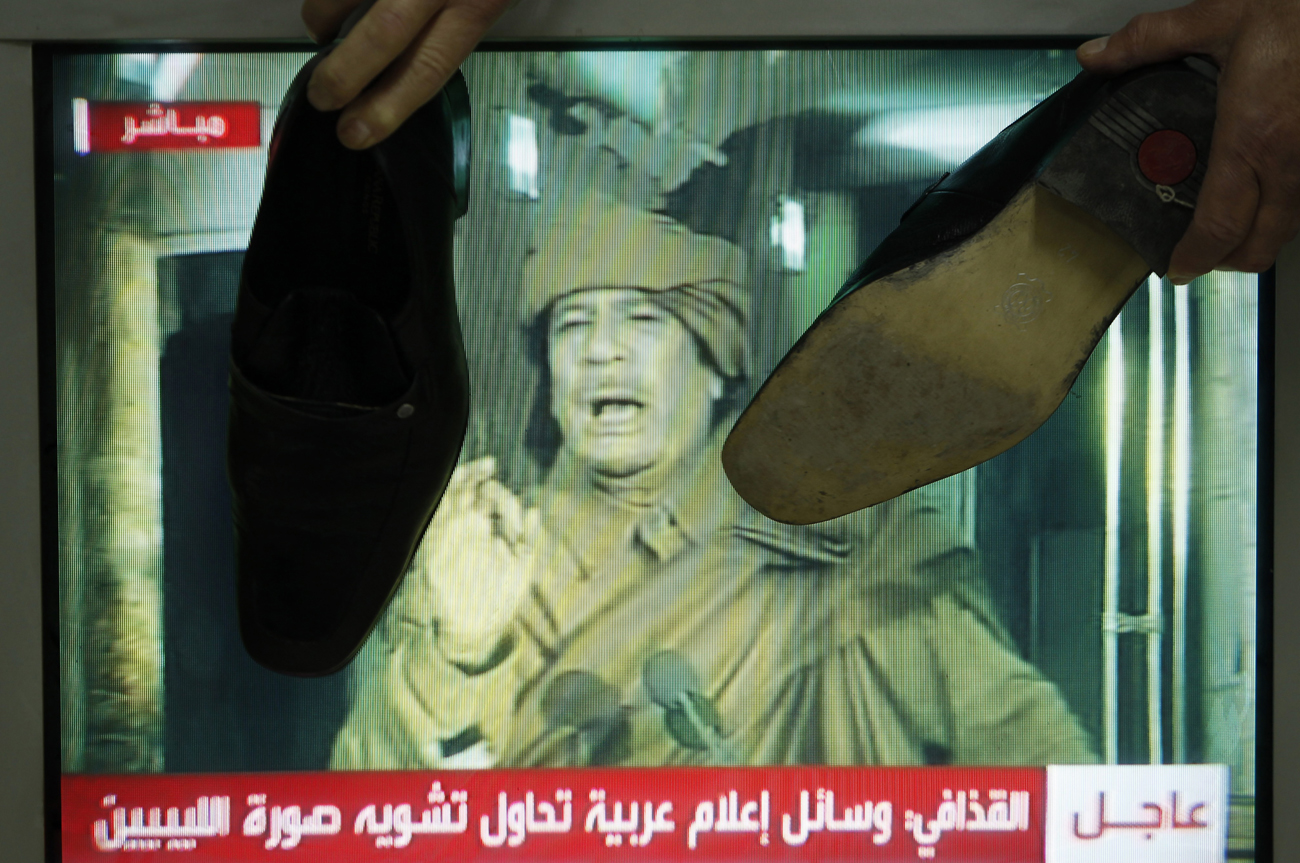 Speech is power, said Ralph Waldo Emerson. The revolutions currently rocking the Middle East are so far defined by three speeches epic in their misunderstanding of the situation on the ground: Hosni Mubarak’s outrageous address of 10 February, and Muammar Gaddafi’s umbrella-toting mumble-athon on Monday followed by his hour of green-book-enhanced ranting on Tuesday. That said, both men know their way around a lectern. Gaddafi in particular is a revolutionary orator par excellence. He knows revolution and oratory go hand in hand. By RICHARD POPLAK.

“Slave,” spat Mirabeau at the King’s emissary, “go tell your master that we are led by the will of the people and will depart only at the point of the bayonet.” With these words, snuggly containable in the body of Tweet today, the great Frenchman fired up a revolution, which would eventually cost Louis XVI his head. This line was repeated with awe in the slums of Paris and beyond like a mantra. Its unbowed insouciance gave the average Jean courage to take to the streets. Mirabeau literally changed the world with a sentence.

“There are two arts which raise men to the highest places of preferment: one is that of the great soldier, the other that of the accomplished orator; for by the former the glories of peace are preserved, by the latter the perils of war driven away.” This was Cicero, himself a great fighter and a big talker, so much so he made Caesar quiver at the gates of Rome. He knew of what he spoke—words were weapons, if wielded correctly. (A certain junior senator from Illinois was a particular of fan of Cicero’s work. It served him well en route to his current position as leader of a burgeoning Free World.)

As we negotiate the rapids of the current geopolitical moment – regimes fall, Caesars tremble – we’d do well to consider the power of the word, and how it fuels the machinery of revolution. Pundits insist this is an awakening driven by Tweets and Facebook status updates—hardly the rousing stuff of oratorical greatness. But this isn’t the whole picture. What are we missing in Caireen dorm rooms, on Tripolitan street corners, in Manaman coffee shops? What can we learn from young Arab students yelling into megaphones? Is there a Cicero in their midst?

Very probably. Revolutionaries are talkers—always have been. They are a species of prophet. Consider Jesus’ speech denouncing the moneylenders in temple in Jerusalem. According to Matthew 21:12, he bellowed, “My house shall be called the house of prayer, but you have made it a den of thieves.” These words undermined the status quo, gave voice to the voiceless and fired up a large-scale religious movement. They are not Jesus’ most quoted oratory—that would be the Sermon on the Mount—but they are surely among his most effective. This was prophet as politician.

So it goes, through the ages. Many of the Arab intellectuals I met when working in the Middle East, a significant percentage of whom were educated at American universities, have a fascination with the American Revolution. In a small office in the American University of Beirut, a professor recited the following to me, which he insisted would one day apply to the Arab world: “The loss of liberty to a generous mind is worse than death; and yet we know there have been those in all ages who, for the sake of preferment or some imaginary honour, have freely lent a helping hand to oppress, nay, to destroy, their country.” Implicit in his recitation of Andrew Hamilton’s famous words was the sense of nationalism and pride that Egyptians in particular have exhibited—and an understanding among the intelligentsia that only Arabs could solve Arab problems.

The American Civil Rights movement was another inspiration; so many Arabs I met identified with black Americans, and felt their marginalisation just as keenly as if they themselves were denied a seat on an Alabama bus in the early 60s. How many times I heard Martin Luther King’s best lines recited in Arab cities? “We have a dream too,” a young hip-hopper told me in a filthy market in Ramla, Israel. “We dream. We dream BIG.” He wasn’t kidding. And then there are the Indians—in particular Nehru’s gorgeous “tryst with destiny” speech, recited on the eve of Partition: “Freedom and power bring responsibility…the past is over, and it is the future that beckons to us now.”

But while Arab revolutionaries have consumed some inspirational calories from speakers elsewhere, the region is hardly without its own fiery speechifiers. There is the terrorist rhetoric of the likes of Osama bin Laden, whose oratory, removed from all context, can sound quite rousing in its Cicero-ian stridency: “We fight because we are free men who don’t sleep under oppression. We want to restore freedom to our nation, just as you lay waste to our nation. So shall we lay waste to yours.”

But Bin Laden has nothing on Gaddafi, who has long been one of the region’s best and, in his especially disturbing way, most entertaining talking heads. He learned, in part, from Egypt’s Gamal Nasser, to whom the following fantastic witticism is attributed: “The genius of you Americans is that you never make clear-cut stupid moves, only complicated stupid moves which make the rest of us wonder at the possibility that we might be missing something.” Nasser, who once held the whole of the Arab world under his thrall thanks to his charisma and his skills behind the mike, could also talk nasty with the best of them. “There is no longer a way out of our present situation except by forging a road toward our objective, violently and by force, over a sea of blood and under a horizon blazing with fire.” This species of rhetoric led to the very ill-considered Six Day War in June 1967, a defeat from which the Arab world never recovered.

Che Guevara was another of Gaddafi’s oratorical models. “I am not a liberator,” Che reportedly said in Mexico in 1958. “Liberators do not exist. The people liberate themselves.” This is the sort of Marxist revolutionary guff The Colonel has been chanting for four decades. The following Che-ism could be plonked directly into The Colonel’s own Green Book, from which he read so copiously during his lengthy, otherwise incoherent televised address on Tuesday: “Great strategic links are being developed abroad to destroy our Revolution. Those forces are trying to attract all those who have been hurt by the Revolution. We do not refer to the embezzlers, criminals or the members of the old government; we are thinking of those who have remained on the margin of this revolutionary process, those who have lost economically, but support the Revolution in a limited way.” Gaddafi no longer has the capacity for this sort of eloquence.

Now, when his people have him on the ropes, he is reduced to calling his enemies “rats”, and forgiving Libyan youth for their transgressions, hopped up as they are on “hallucinatory pills,” coerced by “Foreign Imperialists.” His patrician mumbo-jumbo, which echoed Hosni Mubarak’s final address to the Egyptian people on the eve of stepping down, was an autocrat’s last gasp. One can’t help but wish, as The Colonel continues to strafe his countrymen with militia gunfire, that the following words, considered to be Che’s last, will soon be uttered by Gaddafi: “I know you have come to kill me. Shoot, coward. You are only going to kill a man.”

That said, it is the missing speeches that are so enticing—the speeches given by the Arab world’s coming generation of leaders, who forged their rhetoric in furore of the “Awakening”. One can only wonder, and hope that one day their words are appropriately compiled. Speeches, after all, shape us; they are the very matter of history. “The business of the orator is not to convince,” said William Hazzlit, “but persuade; not to inform, but to rouse the mind… to add feeling to prejudice and action to feeling.” Yesterday, we watched Gaddafi lose his words. Tomorrow, hopefully, we will watch him lose his country. DM