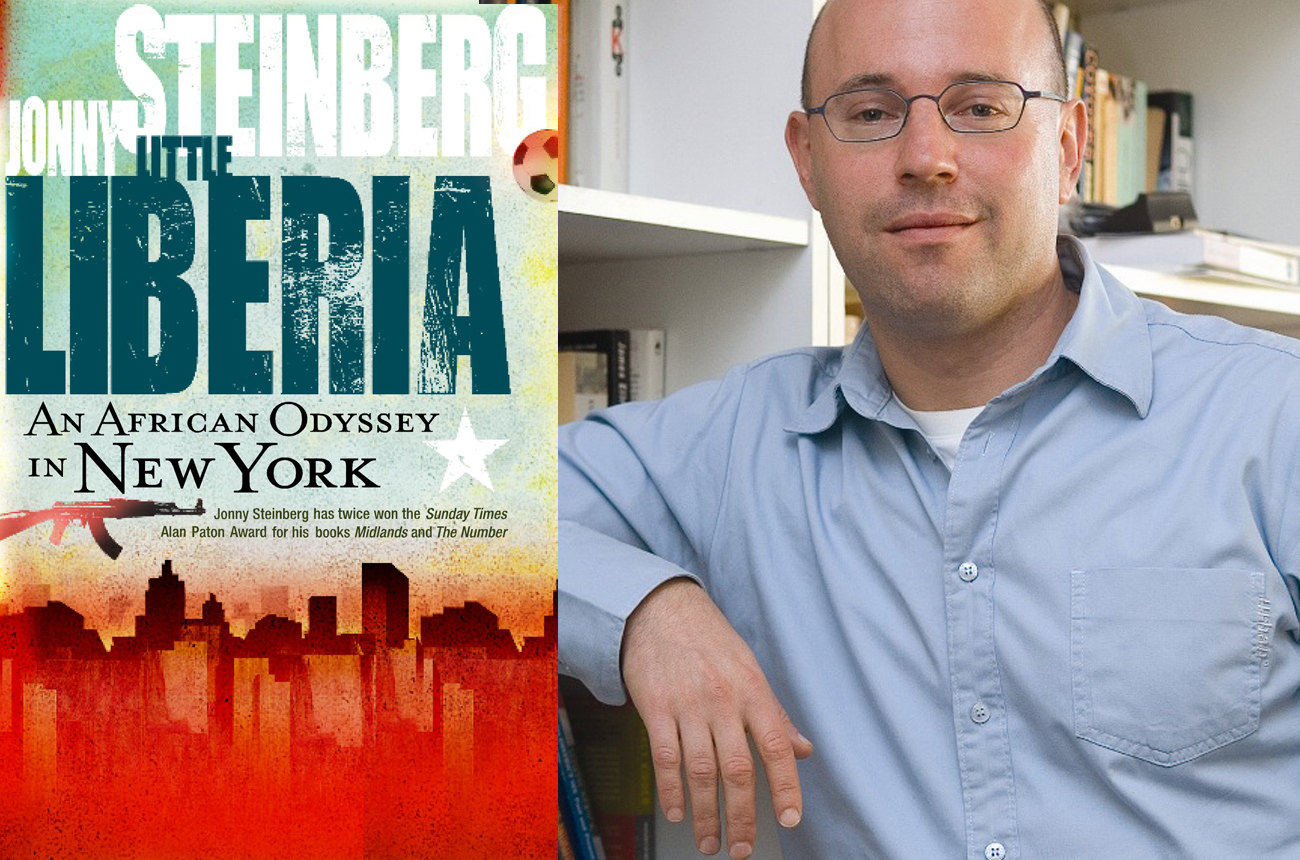 “Little Liberia: An African Odyssey in New York” is a story about exile, but it is also a story about power. Jonny Steinberg examines the struggle for power in Liberia from multiple – and intersecting – angles, as the conflict in the country itself is refracted through the battle of two individuals in exile, as well as the wider Liberian diaspora in New York. And his non-fiction writing style is powerful enough to pull it off. By THERESA MALLINSON.

Steinberg’s forte has always been to illuminate a broader social and political landscape through telling the stories of one or two individuals. Rufus Arkoi and Jacob Massaquoi are the central figures in his latest book, as the conflicts within the Liberian community in New York, as well as the horrors of the war back home are viewed through the prism of their experiences.

This technique allows Steinberg to highlight the complex connections between the personal and the political. When a country is ravaged by civil war, it’s easy to concentrate on the macroscopic viewpoint – the damage done to its national governing structures. It’s just as easy to take the opposite route and focus on the microcosm – the horrific stories of individual refugees. But there are many layers in between and the book uses individuals’ personal experiences to illustrate how the struggle for political power in Liberian repeats itself in the organisation of smaller community structures, even across the ocean in New York.

In the preface, Steinberg writes: “Here on Park Hill Avenue, he (Rufus) thought, you can cheat geography. During the day you go and pick the riches of America. At night, the ferry takes you all the way home, as if a piece of Liberia had drifted across the ocean and docked in New York city.” But this “piece of Liberia” is far from a recreation of an idyllic, romanticised homeland. Since 1980, the country has seen two coups and two civil wars, with peace breaking out in 2003 and elections held in 2005.

Rather than providing a secure home to which to retire at the end of the day, “cheating geography” brings bitter fighting as old tensions are transplanted to new ground. The distrust between indigenous Liberians and the Americo-Liberians (resettled slaves), the uneasiness about roles people played back home during the war and general suspicion about anyone who shows ambition or becomes successful are all features of life in Little Liberia. “It was as if Park Hill and Liberia were twin voodoo dolls, every pinprick felt here drawing blood there, every stab back home wounding someone in this exile.”

“Little Liberia’s” two protagonists left their country for very different reasons: Rufus in 1986, to study engineering; Jacob in 2000, fleeing torture by Charles Taylor’s goons. But both are driven by ambitious natures. Rufus’ life is committed to developing his soccer club, Roza, which has incarnations in Liberia, Ghana, and New York, while Jacob is consumed by his activism and NGO work. And both men, although always looking to the future, are also in thrall to the past – a past that has a nasty way of insinuating itself into the present.

In 1970s Liberia, coups were all the rage. “Among students, no structure, committee or organisation was small or insignificant enough to avoid being usurped… Young, educated Liberians understood that every sphere of life, no matter how petty, was organised around a centre of power, and centres of power could be stormed, their personnel driven into the wilderness.” The first military coup in 1980, and the short-lived counter-coup in 1985, only encouraged this acting out of lesser coups. In 1981 Rufus was the victim of a coup when he was ousted as the president of a soccer club, the Eleven Eagles. In 1987 Jacob was the instigator of a coup at his school regarding the misappropriation of funding from a funeral committee.

Their experiences are repeated in the diaspora in 2003, when Jacob contests Rufus’s power through forming a political party to challenge his influence in the Staten Island Liberian Community Association (Silca). Rufus’s faction ultimately wins the elections – a feat it repeats in 2006, but the doggedness of Jacob’s party in interrogating the finances of the New York Roza and, ultimately, Silca, leads to the downfall of the older man’s empire. Like any civil war, this miniature conflict in Staten Island has no real winners. Rufus’s party may have won the Silca elections in 2003 and 2006, but his organisation founders, while Jacob’s NGO – African Refuge – goes from strength to strength. And, overall, it is the members of the community that suffer the fallout.

On one level, throughout the narrative Jacob and Rufus, and their fight, function as symbols of a much larger conflict. “With regard to home, Rufus and Jacob were stand-in figures: people who could not be trusted to spend public money; people incapable of running for power without cheating; people with terrible acts buried in their pasts. The uncertain future everyone feared for Liberia was condensed into the figures of Rufus and Jacob.”

However, Steinberg is skilful in not allowing their significance in the larger narrative to overwhelm Rufus and Jacob’s individual stories; we never forget that they are real people, first and foremost. The way Rufus cries when he addresses the Monrovian incarnation of his soccer club Roza when he visits Liberia; the sadness Jacob feels when Steinberg describes his own visit to Jacob’s home village – such intensely personal moments are simply left to speak for themselves.

Steinberg is an admirer of Dave Eggers’ “What is the What”, a novel that is an “autobiography” of Sudanese refugee Valentino Achak Deng, and says he thinks Eggers “called it a novel to give him some freedom – freedom to imagine what his subjects felt; freedom to get away with not sticking to facts”. Although Steinberg says he can totally understand why Eggers would want to do that, his own approach is different. “I enjoy the discipline of non-fiction; the discipline of not being allowed into somebody’s head; the constraint of only writing what I know; what I interpret,” he says.

One of these constraints is the fact that there will inevitably be gaps in the story – places inside his subjects’ heads that Steinberg cannot access.  Jacob, for example, finds it difficult to talk about his experiences in Liberia during the war; there are some incidents that he simply cannot bring himself to speak of. “(Jacob) had been detained for three days and serially tortured by Charles Taylor’s security personnel. About what happened to him when he was detained, he will speak only obliquely, and in the most formal language. ‘It became very risk for me to stay,’ he explains of his leaving (Liberia). ‘They accused me of espionage against the government. They wanted a copy of speeches I had made. There had been extracts of my speeches in the newspapers. Some of the remarks I made … They held me to account.’”

The beauty of literary non-fiction, a genre which Steinberg has consummately mastered, is that it allows him to add a meta-layer to the narrative. Rather than imagine what his characters are feeling, instead he reflects on what and why they are holding back. “I’ve always given the people I write about the book (in draft form), and I always write about their response,” he says. Rufus did not choose to really engage with this process, merely emailing Steinberg a few minor factual corrections. With Jacob, it was different. “It was somebody reading a book about themselves; it’s a very awkward and difficult experience for anyone, and one that I wanted to record,” says Steinberg. In the epilogue, Jacob tells him: “Of course I closed up. My feelings about these things are … they are mine. They are for my use, not yours.”

There is an inherent power imbalance when a writer portrays other peoples’ lives. What Steinberg’s technique does is grant his subjects as much agency as possible. In so doing the narrative that typically frames the lives of African immigrants and refugees is challenged and, ultimately, subverted. Rufus and Jacob are not victims that attract our pity, but fellow humans that earn our respect. DM