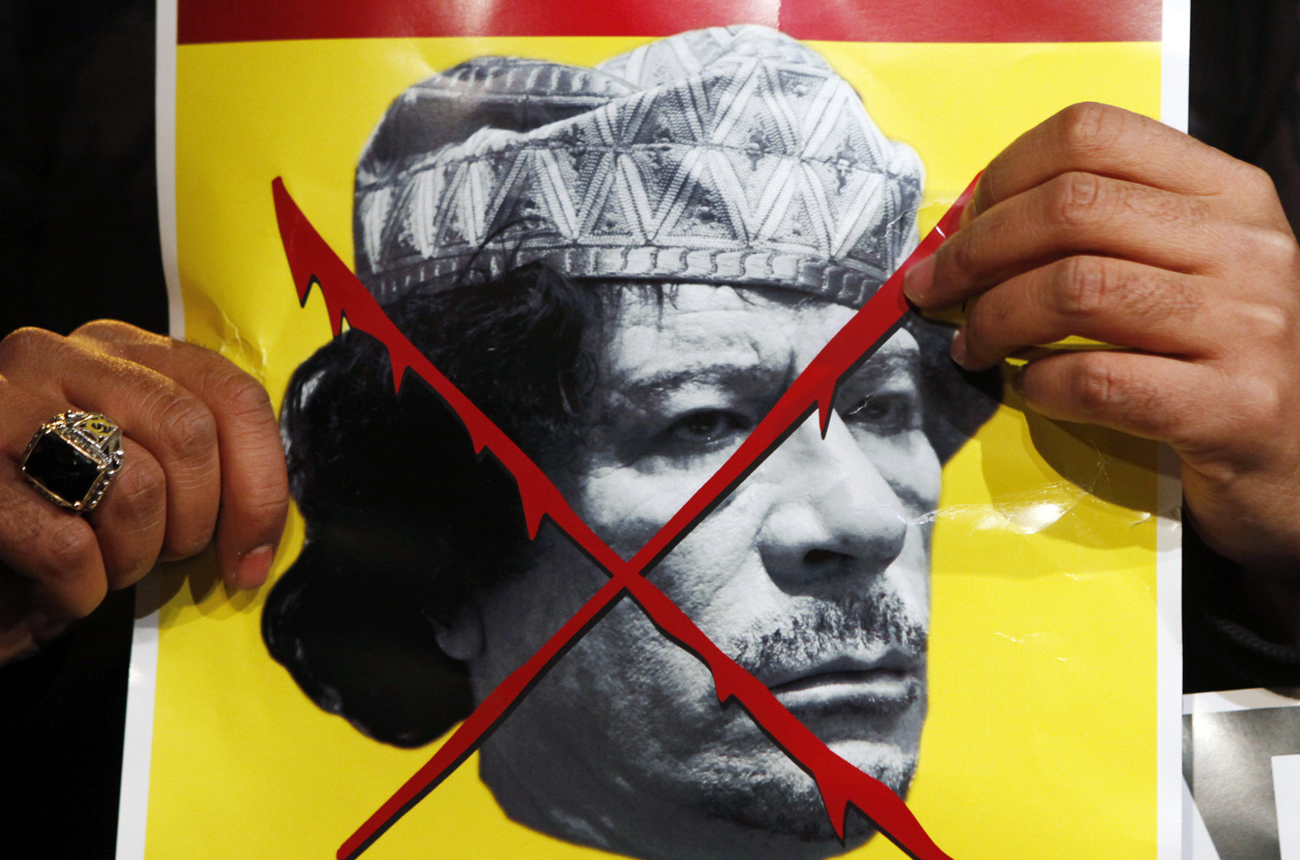 As we’ve already reported, the 2011 revolutions that have transformed Tunisia and Egypt, have reached the “shores of Tripoli”, and what was once the unassailable playground of Colonel Muammar Gaddafi is on the brink of falling into the hands of its citizens – where it rightly belongs. By J BROOKS SPECTOR.

Events are moving so fast it may be impossible to know whether Muammar Gaddafi really is, as rumoured, preparing to leave for Venezuela and exile as a life-time guest of Hugo Chavez or if his rent-a-cop army is poised to suppress an uprising that has virtually taken over Libya’s eastern city of Benghazi and has now spread to the capital as well. Libya has become the latest country caught up in the North African and Middle Eastern turmoil that has dominated global news since angry citizens took to the streets in Tunisia and chased a corrupt autocrat out of their country.

By the beginning of this week, Gaddafi’s four-decades-old regime had come under severe pressure with Human Rights Watch reporting more than 200 people having been killed. Gaddafi’s son and heir presumptive, Saif al-Islam Gaddafi, earlier told Libyans that his nation could “descend into anarchy” if the old man actually had to go into retirement. In his TV appearance he asserted, “We will fight to the last minute, until the last bullet. We will destroy seditious elements. If everybody is armed, it is civil war, we will kill each other… Libya is not Egypt, it is not Tunisia.” He went on to prophesise (or threaten) that if the unrest continues, Libya could become engulfed in civil war and its oil wealth destroyed.

By Monday, the fighting had spread to Tripoli as well, with reports of burning government buildings and looting breaking out. Early on Tuesday, The New York Times was reporting, “The faltering government of the Libyan strongman, Col. Muammar el-Qaddafi(sic), struck back at mounting protests against his 40-year rule as security forces and militiamen backed by helicopters and warplanes besieged parts of the capital.

“By Monday night, witnesses said, the streets of Tripoli were thick with special forces loyal to Colonel Qaddafi as well as mercenaries. Roving the streets in trucks, they shot freely as planes dropped what witnesses described as ‘small bombs’ and helicopters fired on protesters.”

And there were unconfirmed reports (though how to know for sure is one heck of a conundrum) that some military units had shifted allegiances to Libya’s anti-government opposition forces. Meanwhile, several Libyan Air Force pilots, apparently ordered to bomb civilians, defected with their aircraft to nearby Malta and claimed asylum.

Sarah Leah Whitson of Human Rights Watch said, “A potential human rights catastrophe is unfolding in Libya as protesters brave live gunfire and death for a third day running. Libya is trying to impose an information blackout, but it can’t hide a massacre.”

And at the UN, Libya’s deputy ambassador, Ibrahim Dabbashi, went public Monday with a withering criticism of his government while Libya’s ambassador to India resigned from his job, calling on Gaddafi to resign. Libya has now become the bloodiest example in the Arab/Middle Eastern world of efforts by a frightened government to put a stop to civil unrest and citizen protests. Details remain scarce, however, since the Libyan government continues to try to keep the international media out and hold international telecommunications in a chokehold.

Almost inevitably, as the situation in Libya started to spiral out of control, the big international oil companies that actually do most of the heavy lifting in the Libyan oil and natural gas fields were organising evacuations of their employees and foreign governments and their embassies were starting down the same path for their diplomats and remaining expatriate citizens as well.

Meanwhile, US secretary of state Hillary Clinton’s statement on Monday calling for some oil on those troubled Libyan waters seemed to underscore the relative lack of any effective leverage from outside. Clinton said, “The world is watching the situation in Libya with alarm. We join the international community in strongly condemning the violence in Libya. Our thoughts and prayers are with those whose lives have been lost, and with their loved ones. The government of Libya has a responsibility to respect the universal rights of the people, including the right to free expression and assembly. Now is the time to stop this unacceptable bloodshed. We are working urgently with friends and partners around the world to convey this message to the Libyan government.”

Clinton’s words are, however, unlikely to dissuade Gaddafi’s regime from trying to hang on to power. Forty-one years of absolute control, after helping lead a 1969 coup that deposed King Idris (the Senussi tribe’s Sufi-style, political-religious leader from Benghazi who owed his political fortune to western nations), must still be a powerful inducement to stay around just a little bit longer.

Although Libya has loomed large in the minds of western international security strategists in the years after that coup, what with the bombs, machinations and plots from the terrorists Gaddafi has supported or harboured over the years, historically Libya has been a minor player. With a population split between Berber and Bedouin tribesmen and Arabs, and geographically between the ancient divisions of Tripolitana, Cyrenica, and Fezzan, Libya is, in many ways, a constructed country. If it hadn’t become one of the world’s leading energy producers, it might well have just been one of those places only obsessive, intrepid tourists bearing “Lonely Planet” guides and archaeologists took much interest in visiting.

Best known historically as the landscape for some pivotal battles such as Tobruk during World War II, Libya didn’t figure in the “Scramble for Africa” until 1911, when Italy, looking desperately for a modest colonial place in the sun, wrested the territory from the enfeebled grip of the Ottoman Empire. Philologists sometimes argue about whether Aesop came from what eventually became Libya, and literary critics note that Michael Ondaatje’s “The English Patient” takes place partly there as well.

American naval historians and those in the US Marine Corps sometimes recall that the first line of the Marine Corps hymn starts with: “From the halls of Montezuma to the shores of Tripoli…” in memory of an early 19th century naval action against the Barbary pirates and their ransom demands before they would release captured US merchant sailors. And aficionados of films such as “Top Gun” may just remember the final acrobatic dog fights when Tom Cruise and Val Kilmer battled those bad-guy Libyan pilots over the Gulf of Sidra.

There’s an air of inevitability in today’s Libyan airspace. The Colonel may continue to shoot at his own people with all he has. But one thing he’s lost forever: The people of Libya may still be afraid of the thugs on the streets and hidden snipers, but they are afraid of Gaddafi no more. DM

Photo: A demonstrator holds a picture of Libya’s leader Muammar Gaddafi during a protest against his regime outside the Libyan consulate in Istanbul, February 21, 2011. REUTERS/Osman Orsal.