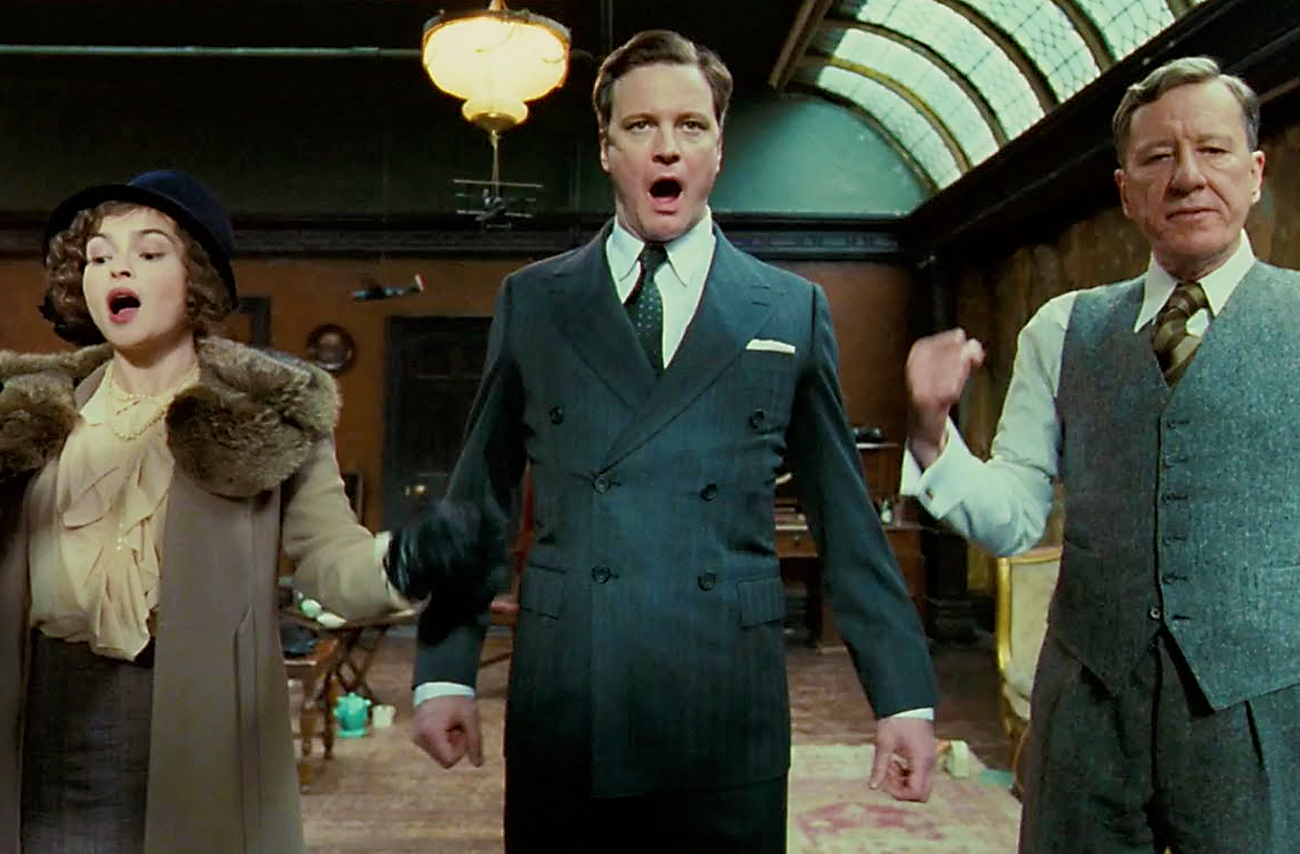 The surest bet of taking home the Oscar for Best Film this Sunday night is a specimen of a recently emergent, particularly British genre - the Royal Family drama. Wafting up from a miasmic bog of nostalgia, “The King’s Speech” has found a large international audience, lucre at the box office and awards aplenty. Why? By RICHARD POPLAK.

My money is on the Royal Family. In various incarnations, the Royals have after all, done it before. Oscars went to Nicholas Hytner’s “The Madness of King George” (Best Art Direction, 1994), Shekhah Kapur’s “Elizabeth”(Best Makeup, 1998), Stephen Frears’ “The Queen” (Best Actress for Helen Mirren, 2006). Whether Balmoral or Buckingham, palaces are giving outer space a run for it in terms of a favoured movie-set locale. It’s worth pondering this particular pop cultural blip for a moment.

In a Britain currently being remade by the Tory/Liberal coalition, a country struggling to re-orientate itself in the face of the virtual collapse of the welfare state, the fraying of familial and societal cohesion and a large immigrant population whose values would seem to be out of step with those of Old Blighty’s. In this maelstrom, the King is in.

Tom Hooper’s new film—he directed “The Damned United”, an energetic recounting of Brian Clough’s 44-day pitstop at Leeds United, and the over-stuffed, overly mannered John Adam’s mini-series for HBO—is the story of King George VI, a.k.a. Bertie (Colin Firth), the once-sickly, now stammering son of the properly regal King George V. Bertie is the sort of inbred blueblood (he had a brother who was even worse off, and died young, but more on his tragic boyhood in a moment) who by all rights should have worked at the back of a clerk’s office, dipping tea bags.

Destiny, or divine right—concepts the film makes no attempt to parse or debunk—had other ideas for him. As World War II looms the very fate of the world depends upon his elocutionary skills, of which he possesses none. He must learn to speak, and speak well. His only hope is an eccentric speech therapist named Lionel Logue (Geoffrey Rush, who was also in “Elizabeth”), an Australian of low birth (are there any of high birth?). An odd-couple buddy picture emerges.

Unfortunately for Bertie, he intersects with history at the moment the wireless and the newsreel usher in the era of mass communication. All Grandma Vic had to do was issue pronouncements from the inner sanctum of one of her many palaces, and voila, all was right with the Empire.

But Bertie must live up to the likes of his father the king, an impossibly stentorian (and very good) Michael Gambon, who has mastered the art of public speaking. And Hitler (played by Hitler), who hitched mass communication to mass murder, and “speaks quite well”, as Bertie deadpans. The film has a Luddite-ish disdain for all this wireless/newsreel guff: It seems to hearken back to the good old days of the 18th century with a nostalgia that slithers uneasily into the reactionary. “Why all this explaining and articulating and motivating?” asks the film. “Why can’t the common man, and his oily representatives in parliament, just bloody take orders?”

Subtext notwithstanding, “The King’s Speech” is primarily an exercise in acting. Colin Firth, who plays buttoned-up as well as any actor of his generation, does a fine job of portraying the man behind the stammer—his eyes brim with pain and shame as he spits his way through a typically compromised sentence. Acting award coronations tend to find the heads of those who play the otherwise-abled, as Geoffrey Rush can confirm. He won virtually every award imaginable for playing addled pianist David Helfgott in the Aussie weep-fest “Shine”. His Lionel is the sort of saintly commoner born to help the high-born—a long-time Hollywood staple.

Meanwhile, Helena Bonham Carter plays Elizabeth, on whom Bertie is utterly reliant. Theirs is a modern marriage, if by modern one means Victorian, wherein a stolid wife stands behind her man no matter what—and the more trouble, the better. Elizabeth’s cheerful, Protestant stoicism is another throwback the film bathes in, sans irony, scene after mawkish scene. (See young princesses Elizabeth and Margaret, sitting among their Corgis, begging dad for a stuttery story while mum looks on with matronly love.) Bonham Carter is so good she is never less than watchable or human, but the film is immune to the sort of complexity she might have brought to the role.

Contrast her with Wallis Simpson (Eve Best), Bertie’s American soon-to-be sister-in-law. This slatternly Yank, drunk and loose, is corrupting his elder brother David (a superb Guy Pierce), who becomes king after the death of George V. King Edward VIII is weak, can’t face up to the onrush of history and is more interested in pussy than policy. He abdicates, and Bertie is thrust into a job he isn’t quite up for, mostly because he can’t speak.

The film’s spine is the relationship between Bertie and Lionel, royal and commoner, pureblood Englishman and mangy man of the colonies. Lionel is, of course, more than a speech therapist—or less, depending on your view of things. He’s an unqualified shrink, trying to crack his way through Bertie’s brittle, but persistent shell, willing his pupil to identify the root-causes of his stammer, which can be nothing else than—you guessed it!—daddy issues. This is the film’s only thoroughly modern conceit – that the talking cure is the only cure, and if we blab one-on-one to a sympathetic ear, if we take the time to focus exclusively on ourselves, to minutely dissect our own lives and experience, to talk and talk and talk about our inner psychological mechanics, and to finally lay the blame for our deficiencies at the feet of our parents—we’ll be fine.

In this respect, “The King’s Speech” is curiously American, and it’s no wonder the film has been so popular stateside. Lionel’s raison d’etre is to minister to a man of privilege and excavate his poor-little-rich-boy childhood for nuggets of illumination. In this, the film doesn’t deconstruct such a hierarchy, but embraces it. It revels in a scene where Bertie and Elizabeth, now King and Queen of Everything, pay the Logue’s a visit. Everyone knows their place, and isn’t it lovely that in so highly a specific situation, commoner and royal can be friends?

The film is awash in middle-brow pseudosophistication—the use of Gaelic wide-angles played to death by the likes of Luc Besson and Jean-Pierre Jeunet; a bout of cursing by Bertie that is only shocking or funny if you use blue rinse in your hair; historical detail that hints at veracity, but is so over-art directed as to be meaningless. But the Academy will gush over this film because it reinforces and glories in every last hoary notion of classism. In the New England, and the New America, the rich get richer and the poor get poorer. The intersection of classes becomes as rare as it was in Queen Vic’s day. In Hollywood, the film will appear particularly seductive, because it doesn’t criticise celebrity or hyper-rich culture, but reify the notion of it.

It should prove equally popular in South Africa (where it is currently on circuit), considering our impressive Gini coefficient. Prince and pauper—we’re all the same, really. Just so long as we know our place, and don’t hope to rise outside of it. DM