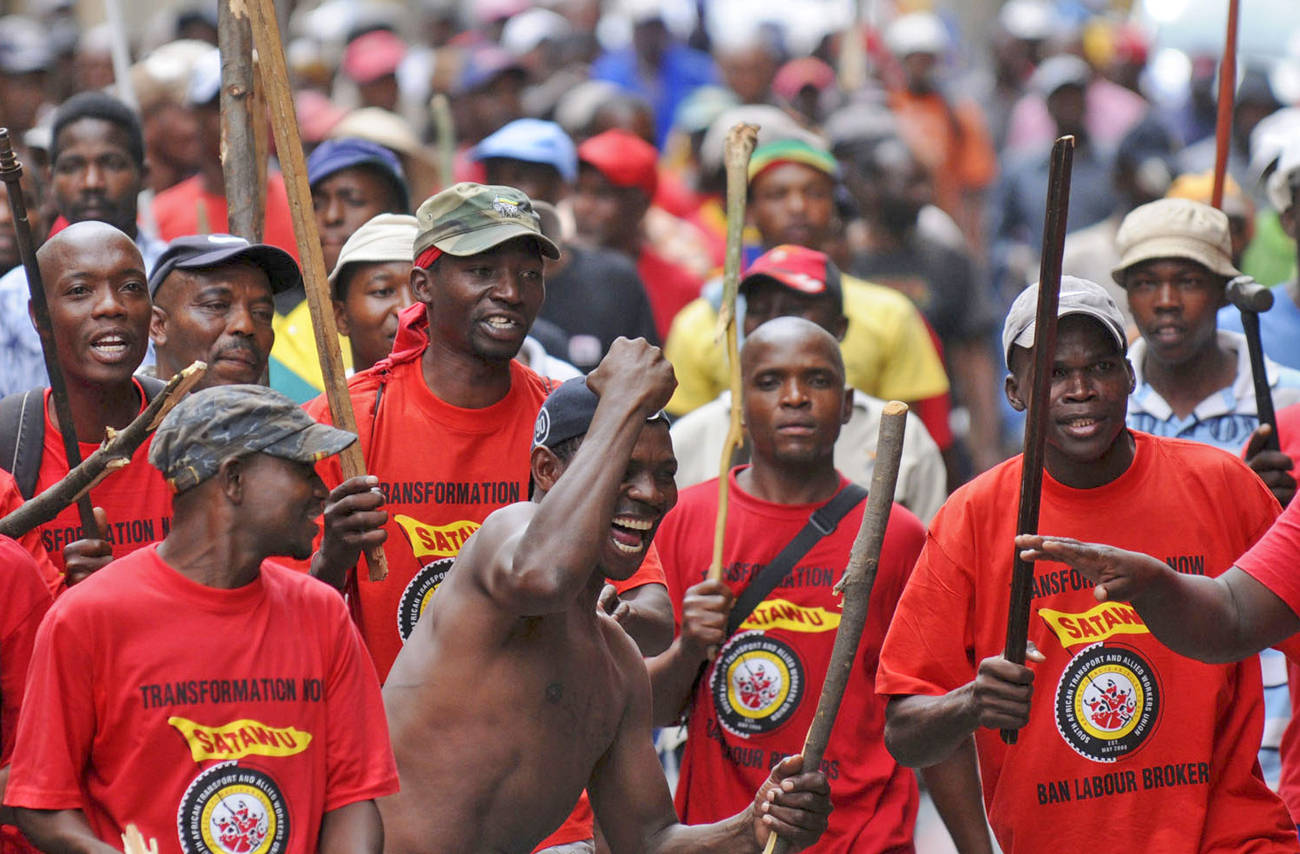 Blazing buses, no-go zones, stone-throwing mobs, rank intimidation – sounds like the terror of the 1980s. But it’s not. It’s the current Transport Workers’ Union strike. Add to the overt violence and rage a moribund leadership and inept government reaction and our country might be "sitting on a powder keg and giving off sparks”. By STEPHEN GROOTES.

The last few days have been marked by one of those events that would appear shocking almost anywhere else, but is accepted as normal in South Africa. On Tuesday three large trucks were intercepted by striking truck drivers. The trucks were torched. From what we know the drivers escaped unharmed. On Wednesday at least one bakkie was torched. Several Ram Hand to Hand couriers also had to hit the eject button when confronted by marching drivers in the Joburg CBD. Compared to what’s been happening in the Mpumalanga town of Ermelo recently, however, it looks like a picnic. But the violence that we’ve seen is  part of a much larger problem. It occurs during almost every major strike. And it’s all to do with unions, leadership and anger.

Technically, this specific strike is about money. The South African Transport and Allied Workers Union wants a 20% increase over the next two years. The Road Freight Employers Association is currently offering around 16% over the same period. It’s not a huge difference, but it’s enough to cause a strike. And those with long memories will remember what happens when Satawu goes on strike.

It has the worst reputation for violence among our current crop of unions. In 2006 the same union was the driving force behind a long industrial action on behalf of security guards. You may remember the guards in your building arrived in normal clothes for a couple of months. The reason was so that they wouldn’t get thrown out of the train or taxi they went home in. That’s a moving train or taxi by the way. In the end, at least nine people were killed.

Satawu’s response was to claim there was no evidence the deaths were linked to the strike. The fact that the murders began with the strike and died with it makes a nonsense of that claim. As did the testimony of the guards who survived the attacks, one of them pointed out that “I know their faces”. Satawu’s general secretary at the time was Randall Howard. He’s now special advisor in the ministry of public works.

Now Satawu’s at it again. Its leaders have refused to take responsibility for the latest truck burning, and it’s only a matter of time before someone is seriously hurt or killed. To be fair, Satawu is not the only villain of this particular piece. Every South African municipal workers strike has its own pictures of people trashing the streets.

The real question is what is in the heady cocktail that leads to such violence during the strikes in South Africa.

The first place to start looking is obviously leadership. Trucks wouldn’t be ablaze if this strike wasn’t happening, and security guards wouldn’t have been thrown off moving trains if the 2006 action hadn’t happened. And the leaders are responsible in several ways. Firstly, they refuse to take action against members who are violent. While there are always the same claim that anyone found to be guilty of violence will be expelled from the union, the fact is it just doesn’t happen. Then there’s the expectations leaders raise. If they claim they will get a certain increase, people refuse to stop striking until that demand is met. At the same time, leaders don’t choose their words carefully, because they don’t take responsibility. As a result people leave rallies and protests in an angry and dark emotional state. This leads to trouble.

Then there’s the workers themselves. For unions representing the lower-paid, the rubbish collectors and street-sweepers, there’s not much to lose. So you strike, and you strike big. You go the whole hog. Add to this a culture of violent protest as a hangover from apartheid, the use of liberation songs and you have a volatile situation in which violent protest is given legitimacy. It’s not just a fight against your boss, it’s a fight against the whole system with has kept you downtrodden. In a way, it’s very understandable. But not forgivable.

Last but not least, some blame also rests with employers. Many of these strikes become strikes because of bad negotiating strategies, or a failure to properly explain what would happen to the business at hand if the unions’ demands are met. Sometimes, it’s the small stuff, the boss who just has the wrong attitude to his workers, and sometimes a union leader is just unreasonable. But by far the biggest share of the blame on the bosses side has to go to government. In all the big strikes of the past few years, whether municipal or public service, things are complicated by the fact that Cosatu is, technically, at least, in an alliance with the ANC. This means that no matter what happens in the negotiating arena, the real dynamic is that between President Jacob Zuma and Cosatu general secretary Zwelinzima Vavi. It also means strikers feel they have a right to expect more from “their” leaders in government. Government also has a nasty history of caving in, which just raises expectations the next time around.

However, there are two other big factors in the strike violence we’re currently suffering. The first is when police minister Nathi Mthethwa says in public, as he did on Wednesday, that strikers “need to refrain from destroying property, assaulting non-striking workers and causing mayhem” and those who do will be punished, everyone knows it’s simply not true. The police don’t have the capacity, or sometimes the will, to pursue these cases through to the bitter end.

The other factor is much more worrying. It’s that the people who are committing the violence are angry. Flaming bloody mad. Angry at the system, angry their lives are not improving, angry at the people who flaunt their riches to the world, be they old moneyed whites or Kenny Kunene. They’re losing hope. They simply do not believe their children’s lives will be better than theirs. And these are the people with jobs. With something, a little something to lose.

Satawu’s current strike could turn out to be just the tip of an iceberg of anger that we barely yet understand. Some of it is because of political promises that cannot be fulfilled. Some of it could be because our current leaders are in political hock to too many ideological constituencies and thus won’t make proper moves on the economy. But some of it is simply because, while we are another country from the one we were in the 1980s, too many people haven’t been able to make the transition, because their lives are still the same. DM

Photo: Striking truck drivers march through the streets of Johannesburg, February 15, 2011. Road freight workers have threatened to disrupt deliveries should their wage demands not be met. REUTERS/Ziphozonke Lushaba.

“Sitting on a powder keg and giving off sparks” – from the song Bonnie Tyler sang about years ago.