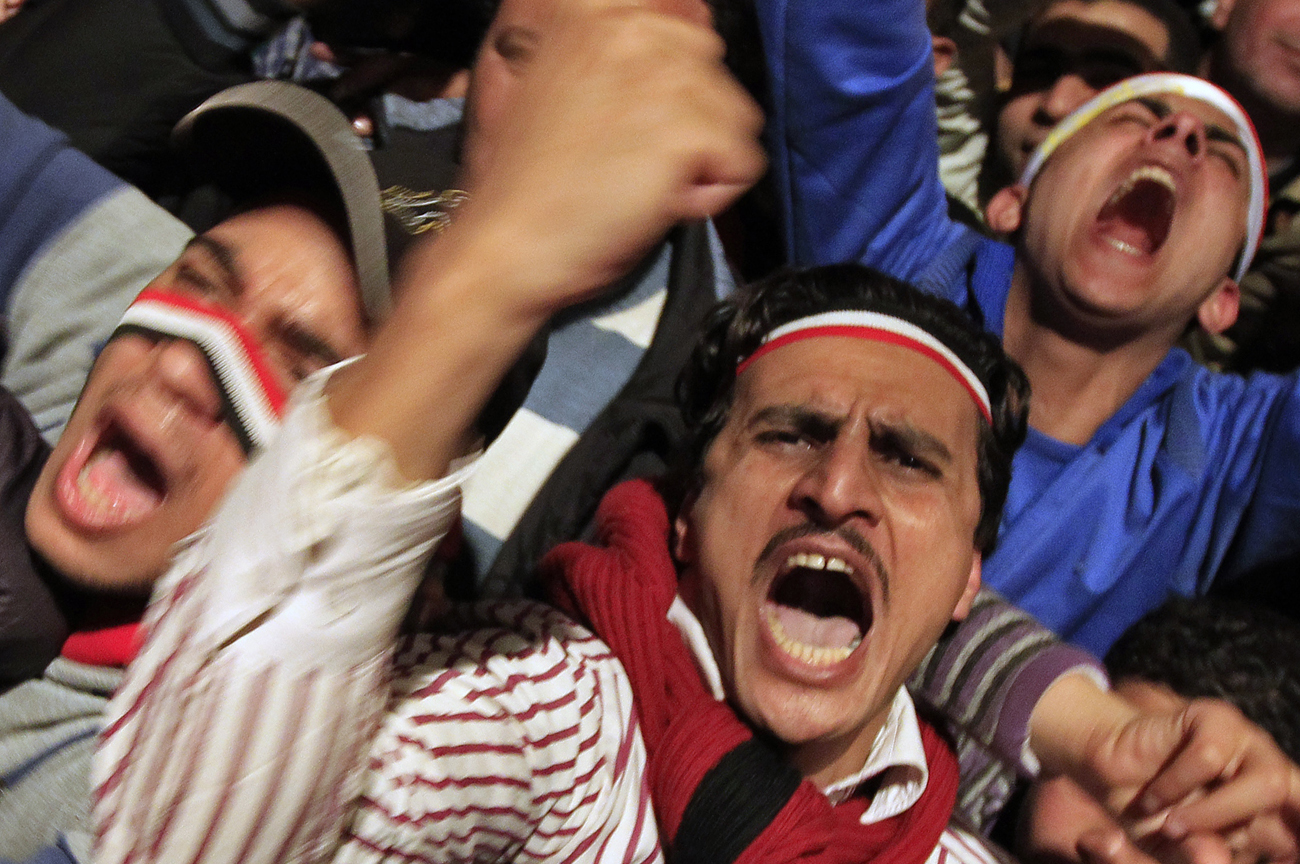 Sparked by the statements from the army and Mubarak's own NDP secretary-general, Tahrir Square was in jubilant mood on Thursday night. Mubarak's resignation statement seemed imminent, and protesters, together with the rest of the world, were celebrating. Little did they know. By SIMON ALLISON.

Hosni Mubarak looked calm and defiant as he delivered his address to the nation last night. Despite frenzied media reports yesterday declaring his imminent departure, the Egyptian president refused to leave despite having delegated all presidential authority to his deputy, Omar Suleiman, and granted a number of constitutional reforms. The reforms are meaningless, of course, while Egypt’s three-decade-old State of Emergency law remains intact, allowing the government to abrogate the constitution at will, and his juggling of presidential powers is a smokescreen no one buys.

But Mubarak’s performance at the lectern was confident, even patronising; at one point, he even declared that “I never sought power or fake popularity”. Thirty years in power and a number of rigged elections beg to differ with this statement, and it didn’t go down well in Tahrir Square last night. In fact, most of the protesters probably didn’t hear it as they were too busy booing and waving their shoes in protest when they realised that Mubarak was not in fact stepping down, the jubilant atmosphere of the afternoon quickly turning angry. Photo: Anti-government protesters in Cairo’s Tahrir Square listen as President Hosni Mubarak speaks to the nation February 10, 2011. Mubarak provoked rage on Egypt’s streets on Thursday when he said he would hand powers to his deputy but disappointed protesters who had been expecting him to step down altogether after two weeks of unrest. “Leave! Leave!” chanted thousands who had gathered in Cairo’s Tahrir Square in anticipation that a televised speech would be the moment their demands for an end to Mubarak’s 30 years of authoritarian, one-man rule were met. REUTERS/Amr Abdallah Dalsh

But Mubarak does have some reasons for confidence. While the reporting on Egypt has been brave and generally excellent, it has been focussed almost exclusively on Tahrir Square and its immediate surrounds. This doesn’t tell the full story. Outside of Tahrir, the shops have re-opened, ATMs have been re-stocked, life is returning, for many, to some semblance of normality.

In addition, Mubarak’s security forces have been hard at work. Harrowing accounts have emerged of journalists who’ve been detained in police and military premises. These are interesting in themselves, but also for the revelation (which should really be no surprise) that Egypt’s cells, holding rooms and torture chambers are overflowing, hundreds, probably thousands have been arrested, many tortured, with more joining them every day, and the true number of casualties is likely to be much higher than the current estimated death toll of 300 as the scale of the state repression becomes apparent. The regime is not going down without a fight, even if that fight is not being caught on rolling news (through no fault of the journalists).

And Mubarak must be heartened by the failure of the opposition to provide a viable leader to replace him. No one, not even the opposition, expects the reins of power to be handed over directly to the people in Tahrir Square. Some kind of leadership structure is vital. Attempts have been made – Mohamed El Baradei and his National Association for Change, backed by the Muslim Brotherhood, the controversial Wisemen Committee, and even the sudden elevation of blogger and Google employee Wael Ghoneim, whose emotional interview after his return from detention granted him instant hero status among the protestors. But no one has taken control, all too aware that this really is the people’s revolution, and that to take charge would be to take credit for something which they did not create. Their humility is admirable, but problematic, as it means there is no viable replacement ready to step immediately into Mubarak’s well-worn shoes. This weakens their negotiating position considerably, allowing the government to claim with some justification that any sudden upheaval would leave a leadership vacuum in the state.

Nonetheless, the pictures from Al-Jazeera of Tahrir Square overflowing with people and similar scenes in Alexandria do not lie. Millions of Egyptian people want change. No matter how many concessions Mubarak makes, no matter how many people he has imprisoned, there are more people demonstrating against him on the streets every day. Today, after Friday prayers, is expected to be the largest gathering yet, after the nation was so heavily inflamed by Mubarak’s speech last night. For yesterday, as smug as the president may have been on screen, was actually a very bad day for Mubarak. The seemingly erroneous media reports predicting his resignation placed huge pressure on him to actually do so; Tahrir Square had already started celebrating. With expectations raised so high, and with the protesters having felt so near to their goal, they will return tomorrow with renewed determination, angrier than ever. As Mohamed El Baradei tweeted: “Egypt will explode. Army must save the country now.” And what of the army? Until yesterday, they had remained determinedly silent, ostensibly neutral. This changed in an extraordinary televised meeting of the Supreme Council of Egyptian army, minus Commander in Chief Mubarak, after which the council issued the mysteriously named ‘Communique 1’, which promised to support the “legitimate demands” of the people. This was widely interpreted as indicating that the army had thrown its weight behind the popular protests, the naming of ‘Communique 1’ seemed proof of a new start.

However, Mubarak remains in power, indicating that at least some of the army is behind him, but for the first time there appear to be serious cracks in the army’s cohesion. For Mubarak to lose control of even some army units would be a devastating blow to his authority and a dangerous point in the developing events.

After 17 days, the mass protests against Mubarak’s regime are today entering their most critical phase. Overnight, some groups of demonstrators have made their way to the presidential palace as well as the state radio and television building, both heavily guarded by the army. This is the first serious attempt to widen the protest area in Cairo. After Friday prayers millions will descend on the streets and are likely to head to all areas. It is unclear whether the protesters will maintain their peaceful stance or try to force their way into the buildings. It is not certain the reaction of the army will be to the people so close to such sensitive buildings; indeed, it’s unclear whose side they are on at all. Whatever happens, the situation is potentially vastly volatile as long as Mubarak remains in power, it will continue to be so. DM