LSE/TSX: A marriage made in stockbroker heaven

LSE/TSX: A marriage made in stockbroker heaven 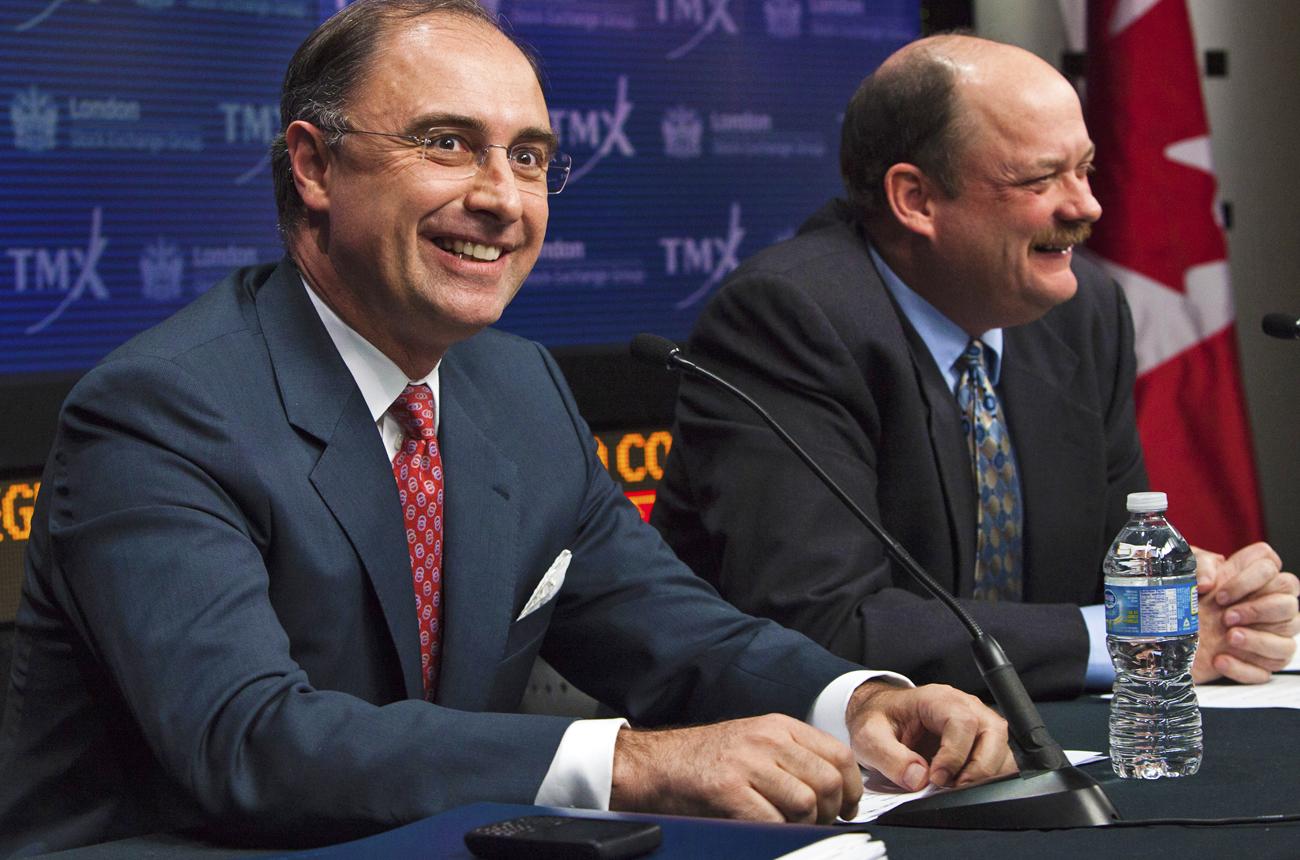 It’s been announced that the London Stock Exchange and the Toronto Stock Exchange are to merge, pending government approval on both sides of the pond. This would create the world’s largest resources-based exchange, something that should appeal to both European and North American investors, and fend off the advance from the east. By RICHARD POPLAK.

At first blush, this is a marriage that makes no sense. What is the lustrous, gorgeous, glamorous LSE doing buying a ring for the dowdy, dull, if thoroughly dependable TSX? As with most couples, dig a little deeper, and it’s either “Who’s Afraid of Virginia Woolf”, a mortar barrage of flung crockery, or “Leave it to Beaver”, apposite, despite being opposite.

Which one, ask the pundits, are we dealing with here?

Make no mistake, this is a blockbuster $6.9 billion hookup—at least as “wow!” worthy as the coming royal nuptials in Westminster in April. London Stock Exchange Plc is one of the most financially powerful trading houses in the world. Of late, the LSE has been aggressively pursuing listings from companies in the emerging east European economies, combining these with a Russian relationship that continues to grow. The LSE makes no bones about its wish to compete with the New York Stock Exchange, and their listings, particularly in the resources sector, have expanded robustly.

Toronto’s TMX Group Inc., located along the city’s icy Bay Street corridor, has done a fine job of managing and growing the TSX into a medium-sized exchange with an unimpeachable record. It’s gobbled up most of its rival exchanges in Canada, and in a market of 35 million people, with almost endless resources, the upside is vast. The Australian mining giant BHP recently made a staggering $39 billion play for Saskatchewan’s potash deposits, which was blocked by the Canadian government. There be gold—or potassium—in them thar hills. That said, European investors are traditionally wary of New World investing, and Canadian companies like Suncor Inc. and Canadian Natural Resources Ltd find themselves left out in the cold, literally and figuratively.

The purchase will be good to listed companies; it should prove even better for investors. A combined LSE/TSX would form the largest resource-based bourse in the world, and the eighth largest exchange overall. On one hand, it would allow Canadian investors, currently flush with cash (and not as browbeaten by the recession as Americans or Europeans), a better way into the blue-chip European market, and likewise a safe venue for Europeans to test the mettle of the Canadian resource market.

Because both exchanges are so well run, and the merger would inject extra cash into the mix, investors can expect the state-of-the-art technology, the finest traders, A-class listings, more volume, more liquidity, more diversity and greater efficiency. The only way to run a world-beating exchange is to ensure investors and traders can get the volume of shares they want at the price they want. This is easier at a big bourse, simply because there is more money and activity coursing through it. There’s nothing in either the LSE’s or the TSX’s recent histories to suggest they wouldn’t be able to turn trades around in seconds. In short, investors will find much to love.

It seems likely that companies listing on the LSE/TSX combo would be subject to the same tough requirements currently extant at both bourses. Even better for North American investors, it seems probable that the exchange will come under the authority of the UK’s Financial Securities Authority, which is nowhere near as lax as the Ontario Securities Commission, with its typical North American pliability. The bourse will be well regulated and well supervised.

What, then, is the downside to this union? For one thing, the parents may not agree. The purchase is currently under review in Canada at both a provincial and federal level. Next door, the Quebec government is kicking up a fuss, because this merger would slash into the Montreal bourse. As with the potash deal, Canada’s Conservative government may well give in to the populist terror of selling out good ol’ Canadian companies to bad ol’ foreigners—an irrational bout of nationalist nonsense currently gripping the country. Yes, the deal would probably mean downsizing at the TMX group. Yes, there is a chance Canada might lose some high-paying financial sector jobs. But if it means Canadian companies and investors get richer, the deal will more than even itself out.

In truth, this is not a merger of equals, but the purchase of a smaller exchange by a larger one. The marriage rhetoric is meant to placate jittery Canadians. That said, consolidation is nothing new, and if the LSE and the TSX hope to compete with the Shanghais and Dubais of the world, they’d best buy their tuxedo and wedding dress, slip on those rings, pick a song for the first dance and get hitched already. DM

Photo: London Stock Exchange (LSE) CEO Xavier Rolet (L) and TMX Group CEO Tom Kloet speak at a news conference regarding the merger of the TSX and the LSE in Toronto, February 9, 2011. The London Stock Exchange is to buy Canada’s TMX to claw back lost market share and create the world’s fourth-largest bourse trading $4.1 trillion of stock a year. REUTERS/Mark Blinch.