Chechen terrorists, the rebels of the lost cause 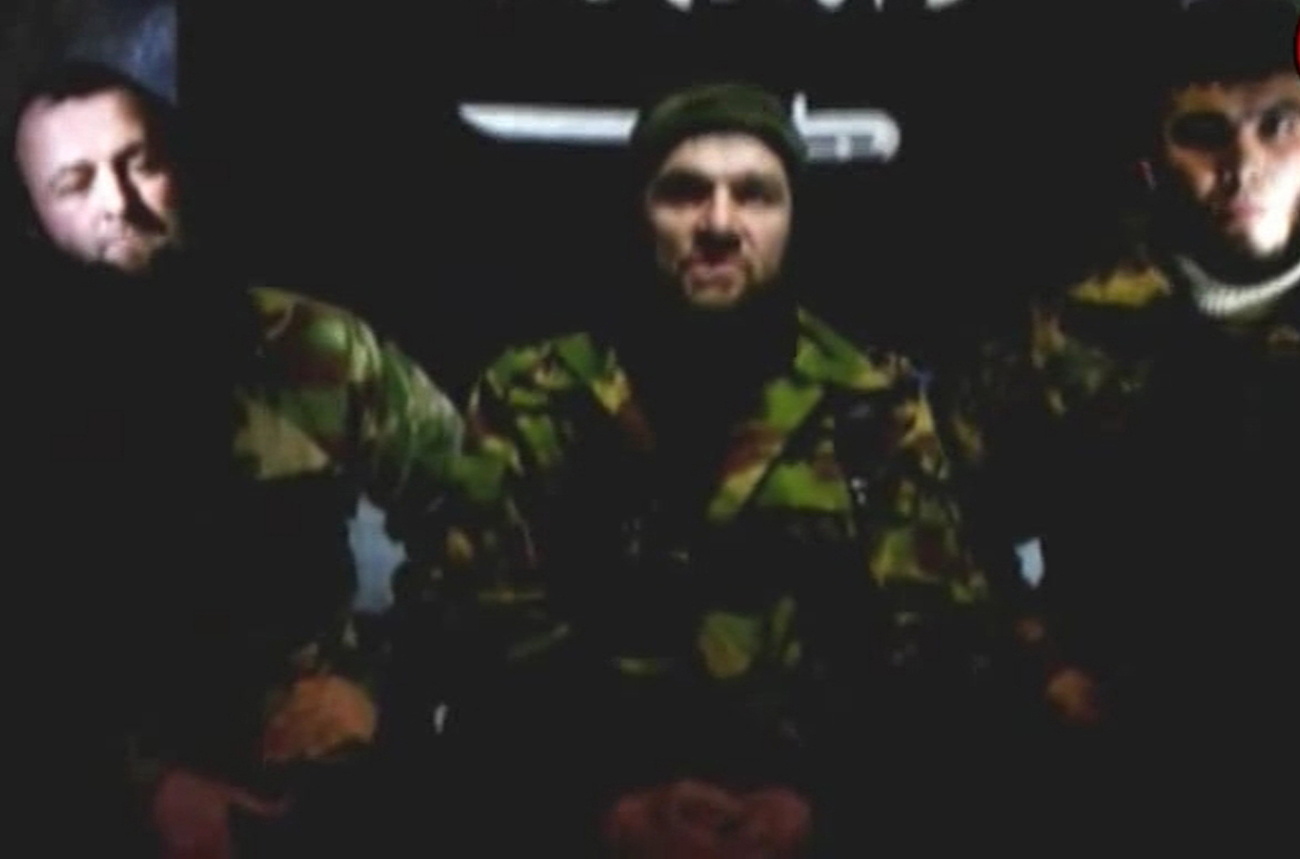 On Tuesday, Chechen rebel leader Doku Umarov claimed responsibility for January’s Moscow airport attack. He has also promised to accelerate the bombing campaign against Russia. Strapped for cash and abandoned by local allies, the few remaining Chechen rebels are resorting to their last weapon: Terror. By SIPHO HLONGWANE.

On 24 January, a man in a black baseball cap entered Domodedovo Airport and stood in the international arrivals terminal. After waiting 15 minutes, he detonated the bombs he’d strapped to his body, killing himself and 35 other people in the building and injuring a further 180. Among the dead were Britons, Germans, Austrians, Ukrainians, Tajikistanis, Kyrgyzstanis and Uzbekistanis.

This isn’t the first time Russia has been attacked by rebels from the Caucasus region. Not even the airport in Moscow is new to attacks. But this attack was different. Not only was it the biggest airport strike in terms of victims, but its alleged mastermind is an ethnic Slav, a Russian and not of any one of the Caucasian ethnicities. Almost a week after the bomb attack in Moscow, the authorities arrested Vitaly Razdobudko, a 32-year-old disenchanted Russian who had embraced radical Islam and planned the airport attack. Photo: People walk past flowers left on a floor in memory of those killed in Monday’s blast at Moscow’s Domodedovo airport January 25, 2011. Russia’s President Dmitry Medvedev ordered investigators on Tuesday to root out the culprits behind a deadly bombing at Russia’s busiest airport and threatened sackings over security lapses he said had aided the attack. REUTERS/Denis Sinyakov.

Attacks of this nature in Russia have historically been perpetrated by non-Slavs, to the extent that antiterrorist squads quite readily used race profiling in an attempt to identify and apprehend possible suspects. The Chechen rebel leader Doku Umarov took responsibility for the attacks in a taped video released on 7 February  saying, “This operation was carried out on my order”. Umarov is fighting for an independent Islamic state in the Caucasus.

In the immediate aftermath of the blast, even as Russia’s President Dmitry Medvedev sacked several airport security staff, suspicion fell on Chechen rebels. As the investigation lengthened, the suicide bomber’s possible place of origin was expanded from Chechnya to encompass the clutch of troubled Russian provinces known collectively as north Caucasus. Smothered between Russia in the north and Turkey and Iran to the south, it is one of the most fought-over places on earth. It is in these termagant mountains that the clash between the East and West, Muslim and Christian, has been the most bitter and painfully protracted.

The Caucasus states have almost never been able to rule themselves. Khazars, Alans, Persians, Mongols, Byzantines, Turks and Russians have all taken turns at ravaging the mountains and imposing themselves on the more than 100 ethnicities scattered across the Caucasus Mountains. The Chechens, perhaps more than others, have felt the boots of various oppressors throughout their history.

With the fall of the Soviet Union, Chechnya declared independence in 1991, with the former Russian General Dzhokhar Dudayev taking power in his homeland. However, despite Boris Yeltsin’s proclamation that the satellite Soviet states should take as much power as they could stomach, Moscow never intended for countries like Chechnya to be truly free.

In 1994, the Russians decided to correct Yeltsin’s mistake and began a two-year assault (known as the first Chechen War) on Chechnya to dislodge Dudayev . They eventually succeeded in murdering Dudayev in 1996 when a Russian fighter plan got a lock on his position after intercepting a satellite phone call the Chechen commander was making, and blasted the location with an air-to-surface missile.

In January 1996, Chechen rebels seized a hospital hostage in the town of Kizlyar in neighbouring Dagestan. The rebels then attempted to take the hostages across the border into Chechnya, but were stopped by Russian commandos who killed many hostages in the rescue attempt.

In August 1999, Chechen militants headed by Shamil Basayev (at this stage, Umarov was a close ally of Basayev) crossed into Dagestan. They were beaten back into Chechnya a week later. Using this incident and the bombing of apartment complexes in Moscow which killed hundreds of people in September of the same year, Russian President Vladimir Putin ordered the invasion of Chechnya. Far more prepared than before, the Russian forces quickly surrounded and subdued the country.

Realising he could hold Chechnya far easier using the old divide-and-conquer tactic, Putin installed one of the Chechen warlords, Akhmad Kadyrov, as Russia’s puppet president of Chechnya. Those who refused to bow to Moscow’s authority now found themselves without a country and were now fighting against their own countrymen. Three years later, Chechen rebels took control of a theatre in Moscow, and after a three-day siege, Russian commandos entered the theatre and killed 41 Chechen guerrillas in the attack, as well as 129 hostages. The incompetence of the Russian commandos shocked the world, but the incident failed to illicit sympathy for Chechnya’s cause.

After 9/11 the Chechens faced increasing isolation as Russia succeeded in branding their rebellion as Islamic extremism. In September 2004 Chechen militants seized a school in Beslan and demanded autonomy for their country. Like the theatre attack, the Russian commandos who stormed the school after a three-day siege botched the operation horribly, killing more than 131 hostages (half of them children) in the rescue operation. After this incident, rebel attacks quietened down. In the same year, Akhmad Kadyrov was assassinated in Chechnya’s capital Grozny. Russia replaced him with the current incumbent, his son Ramzan Kadyrov.

In the past two years, rebel attacks from the north Caucasus have picked up again, including two female suicide bombers who targeted Moscow’s subways in March 2010.

The Chechens are Sunni Muslims, thanks to a protection deal struck in the 16th century for incorporation into the Ottoman Empire. The religious element would poison Russo-Chechen relations for centuries to come. The fight between Russia and Chechnya began in earnest after 1783 when the Caucasus became a buffer zone between the Turks to the south and the Russian Empire to the north. The Czar’s Cossacks became a permanent fixture in the region. The first war between Russia and the Caucasian states began in 1830, a war Leo Tolstoy famously took part in for czarist Russia. The hatred between Russians and Chechens was mutual, with the mountain rebels developing a reputation for sneaky underhandedness and favouring sniping and guerrilla attacks as opposed to Russia’s formulaic grand battles. The first Chechen war ended in 1859 when the Caucasian leader Imam Shamil was captured by the Russians.

Because of their religion, the Chechens and other Caucasian groups suffered brutally under Stalin’s regime by being subjected to mass deportations to Siberia, collectivisation and other horrors. It was not difficult for wahhabism, the radical strain of Islam that had swept the Saud family to power in Saudi Arabia and was later adopted by Osama bin Laden, to find a foothold among Chechens. This didn’t immediately translate into acts of desperate violence against Russia, because the Chechens still felt they had a chance at autonomy.

The centuries-old resentment between Russia and its north Caucasian satellites is unlikely to end soon. Not only is the region cripplingly poor, but no countries in the West recognise the independence of states like Chechnya, Ingushetia or Dagestan. Since Putin’s rule, the attacks have taken an increasingly extremist stance as the few remaining Caucasians who still resist Russia’s rule grow increasingly desperate.

Umarov is fighting to establish an Islamic Caucasus emirate, but he and other Chechen rebels face a hopeless task. Putin has succeeded in turning the Chechen clans against each other, by installing the most powerful among them to power. Establishing an independent Chechnya (or emirate) would entail not only throwing off Russia’s yoke, but dislodging a Chechen clan from power as well. Should that happen, the capital Grozny would resemble Mogadishu: a battleground between different clans for power. But Chechnya is not there just yet. Umarov and the other rebels are fighting for the lost cause of a united Chechnya. Putin has rendered that outcome impossible. Umarov’s adoption of complete terrorism (as opposed to the sovereign wars of his predecessors) indicates that he realises how hopeless his position is and has nothing to left to lose. All he can do now is terrorise Russia by attacking civilians. DM

Main photo: An undated still image taken from video shows the address of Chechen rebels, led by Emir of the Caucasus Doku Umarov (C). Chechen rebel leader Umarov has said his forces will carry out more attacks and that Russia faces a year of “blood and tears” if it refuses to abandon its North Caucasus territories, according to a story on February 5, 2011. REUTERS