The legend of Triumph weaves wonder through Magoebasklo...

The legend of Triumph weaves wonder through Magoebaskloof 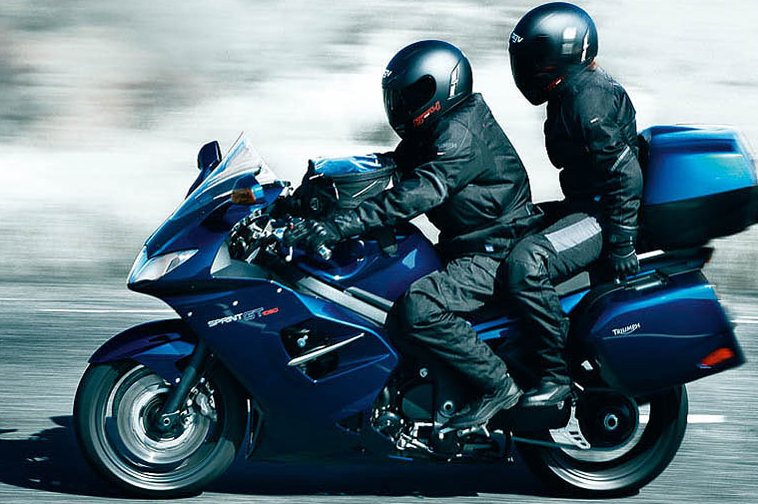 There’s always been an aura of motoring magic, a mystique that hangs like Arthurian legend around Triumph motorcycles. But when that legend came to life beneath him on the scenic majesty of Magoebaskloof near Polokwane,  RéHANN COETZEE knew a legacy had returned to the road.

Being of a feather, motorcyclists do tend to flock together. The best known are the Harley Owners Group, The HOGs. BMW riders also have their clubs that meet up monthly for “noggins” – group rides for members.

Not all brands have this kind of esprit de corps, but Triumph sure does. Harley-Davidson is very proud of the fact that they’ve been making motorcycles since 1903, but the first Triumph rolled onto the road a year earlier in 1902.

Of course, the demise of the British motor industry is a sad bit of history and probably tainted the island’s perceived inability to produce anything with an engine that will outlast its first tank of fuel. During that sad period, Triumph closed its factory in 1983. The next year a housing development stood in its place.

In 1990, property developer John Bloor took over the brand and revived it. After extensive development the first new Triumph, the Speed Triple, hit the blacktop in 1994. Once again Triumph had bikes with character and, in my opinion, very un-British – bikes that are not just great looking and huge fun to ride, but all-round machines that are pretty fine. Older models, referred to as “modern classics”, such as the iconic Bonneville, have also been revived. Nowadays these old-looking bikes have fuel injection, but still look like they have carburetors.

Their “urban sports” and cruiser models are all powered by three-cylinder engines, adding to the character of these bikes. The Triumph Rocket III cruiser has a 2.3litre engine, still the biggest engine in a mass-produced cruiser.

So, with a real heritage and now some stunningly modern bikes on the market, there are  plenty reasons for owners of Triumph bikes to flock together. Only, this group is less structured and a little closer to the image of rough-and-tough bikers of legend.

The Riders Association of Triumph – RAT – is more of a fan club than an owners group. RAT groups are organised by Triumph dealers to encourage enjoyment of the brand. Every dealer organises one or two RAT rides each year, usually a weekend away in a scenic part of the country, and we went along to the one in Magoebaskloof, hosted by Polokwane Triumph dealer, Fast Bikes. Triumph has two three-cylinder engines that it uses in its urban sports bikes – a 675cc and 1050cc. These engines offer a pleasant compromise between the rev-ability of a Japanese in-line four-cylinder and a V-twin’s low-speed torque output. And these triples do sound glorious!

Triumph’s sports tourer Sprint ST has just been joined by the more comfortable Sprint GT. Mechanically similar, the GT has a higher screen and the seating position is more comfortable for longer trips. My wife and I met four other Gauteng couples and rode together to Magoebas.

The sad bit about riding in Gauteng is that the first 150km of any trip out of the province is dreary highway scenery. And, of course, toll gates. We used that as an excuse and turned off to Bela Bela and from there we rode the R101, the old N1. The distance is much of a muchness, but far more scenic.

Lunch in Modimolle (Nylstroom) showed us that summer in the north of our country is not for sissies. Bikes were parked in the shade and we took our helmets inside to cool off in the air-conditioned restaurant. Our jackets were also shed as soon as we got off the bikes.

Our first refuelling stop in Mokgophong (Naboomspruit) brought a nice surprise. Although we hadn’t been trying to set any records, our riding was spirited and I did not expect the fuel consumption of 5,07litre/100km. The bikes’ panniers were full and we were carrying a soft-tail pack as well.

We missed the turnoff to Magoebaskloof and rode through Polokwane’s Friday afternoon peak traffic. Not a terribly pleasant thing to do, but, even fully loaded and with a pillion, not impossible. We rode past traffic cops, also on Triumphs, and gave them a wave.

From Polokwane the scenery changes dramatically. The almost colourless highveld gave way to mountains and valleys. And green. This was what we had come for – green scenery and twisty roads. The Magoebaskloof Hotel accommodates 142 in 68 rooms and every room has a magnificent view of the Kloof. After a long hot day’s ride, the Phoenix & Fireman Pub has cold beer and an old-world welcome.

After breakfast, we hit the road to Louis Trichardt via George’s Valley. We had a refuelling stop in Modjadjis Kloof (formerly Duiwelskloof) and was the only time I really felt dodging potholes was a tiring affair.

With the temperature on the wrong side of 35°C, I dipped my head in the pool to survive the trip back. Lunch was at the Iron Crown Pub & Grill in the little dorpie of Haenertsburg. After lunch I joined five other bikers down George’s Valley to Tzaneen and out to Mount Agatha. We wove some of the most pleasant twisties I’ve ever been on and could still enjoy the scenery without having to slow down to a crawl. After a quenching stop at the famous Coach House, we headed back through Tzaneen and Magoebaskloof to our hotel.

Magoebas Kloof offered an exhilarating ride and I scraped the Sprint GT’s centre stand around some of the tight corners. Even riding really hard, the bike stayed composed, soaking up the unexpected dips in the corners. With the 1050 triple, power delivery also stays smooth right through the rev range.

After breakfast, we refuelled in Haenertsburg for the trip home. I was really amazed to see that even after Saturday’s hard riding, the fuel consumption was only 5,57litre /100km. No wonder the Sprint ST is so hard to beat in the annual bike “econorun”.

After a weekend of involved and spirited riding, I came away mightily impressed with the Triumph Sprint GT. It is a very comfortable and fast tourer and the Triumph panniers work well. There is enough packing space and the ignition key also works on the panniers, so no bulky bunch of keys. The panniers are mounted out of the way for the pillion and are aerodynamic enough not to be cumbersome or affect handling.

The Triumph Sprint GT continues the Triumph legacy – and you almost feel like a Knight of the Round Table on his trusty charger. DM