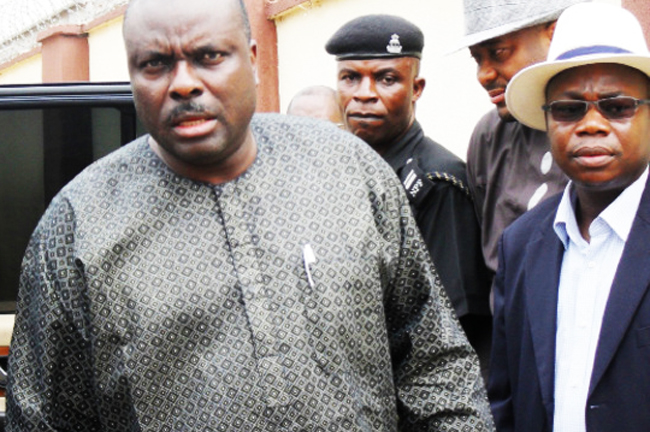 James Ibori is the head of a small Nigerian town called Oghara. He is also charged with stealing millions while in office in the Nigerian government. You’d think locals would turn him over because he took funds from public coffers. But Ibori has bought the loyalty of the people of Oghara and they’re ready to defend him to the death. By Forum for African Investigative Reporters (FAIR)

A visitor to Oghara, a town of less than 5,000 people in Delta State, Nigeria, could easily mistake it for a place in the developed world. The street lights work. The well-paved roads have state-of-the-art drainage facilities. The town also boasts a modern sports stadium, a polytechnic, a campus of the Niger Delta University, the Nigerian navy logistic headquarters, an Electoral College, the 51st Squadron of the mobile unit of the Nigerian police, a modern specialist hospital with a teaching facility and close to a dozen hotels.

The only reminders of the town’s geographical location are the landscape, the colour and features of its inhabitants and, perhaps, the fact that the public swimming pool is overgrown with weeds. That this is not only a developed, but also a well-run place is immediately clear from the fact that, though traffic lights are still to be installed, road users are generally disciplined and courteous. As state buses, commercial and commuter vehicles wait their turn and people on bikes and motorcycles also behave, the traffic flows like a river.

Oghara is the home town of Ibori, the immediate past governor of Delta. Though accused of corruption, Oghara’s villagers love Ibori because “he is the one who has brought all this development”. Ibori is so popular that in April 2010 more than 1,000 youths, some armed with AK47s, blockaded the entrance to the village to stop police sent by the economic and financial crimes commission from arresting him. He was being persecuted for his political persuasions, the protesters claimed.

The EFCC alleges Ibori stole millions during his term as Delta governor. The allegations include:

The EFCC says these charges only relate to money laundering – for which he is also being sought by the British police. Ibori might have siphoned off more funds meant for his state, but like his people, he claims that the corruption charges are politically motivated. Ibori says he is being persecuted for supporting former Nigerian president Umaru Yar’Adua and foiling those who challenged him in the 2007 presidential elections. Yar’ Árdua won the controversial elections. Ibori also claims that EFCC boss, Nuhu Ribadu, holds a personal grudge against him. He says Ribadu was angry with him for not recommending him to former president Olusegun Obasanjo as police chief.

Ibori was finally arrested in Dubai in May 2010 on the orders of the British police after sneaking out of Oghara.  He has been in custody since and on 18 October an appeal court in Dubai approved Britain’s request to extradite the former governor to face money laundering charges.

While the people of Oghara adore him for the infrastructure and economic and social activity he brought to his home town, his critics accuse him of “planting all the state’s trees in one farm”. There may be some truth to that, seeing Oghara is better developed than other towns in the same state. But Ibori’s supporters point at lack of development across the board in other Nigerian states and ask what has been done by these state governors with the budgets they have at their disposal.

In addition, other governors accused of, and sometimes charged with, corruption, have not spent their funds as visibly as Ibori spent his in Nigeria. Abubakar Audu, governor of Kogi state from 1999 to 2003, was charged by the EFCC with embezzlement of $334 million. But in his home town, apart from his palatial white house that stands like a city on a hill, and one college, development is largely absent. The road that passes through the community was, until recently, in a poor condition. There is no hospital in this village.

Another governor the EFCC is prosecuting for corruption is Saminu Turaki of Jigawa state. He is accused of embezzling $1.8 billion, which the EFCC claimed he squandered on phoney projects. In his country home in Kazaure, the only visible development project is an information technology institute. The roads in Kazaure are bad, there is an acute shortage of water, medical facilities are lacking and schools are in deplorable state.

Some other ‘corrupt’ governors have brought some development to their home towns, but none of them has done as much as Ibori. Jolly Nyame, developer of Oghara Taraba state from 1999 to 2007 and who is facing charges of corruption $100 million, built some roads, provided potable water, some low-cost housing and renovated schools in his hometown of Zing. He also built a three-star hotel, which he runs as his personal property.

Joshua Dariye, who was governor of Plateau state faces charges of squandering $4.6 million,  brought Plateau State University to his village, Muchere, and provided a good road. However, the investments in these two cases do not square up to the funds they are accused of having embezzled and pale in comparison to what Ibori did in Oghara. DM

Read more on Nigeria and issues of high-level corruption: