AOL gobbles up Huffington Post for $315 million, leaving many puzzled 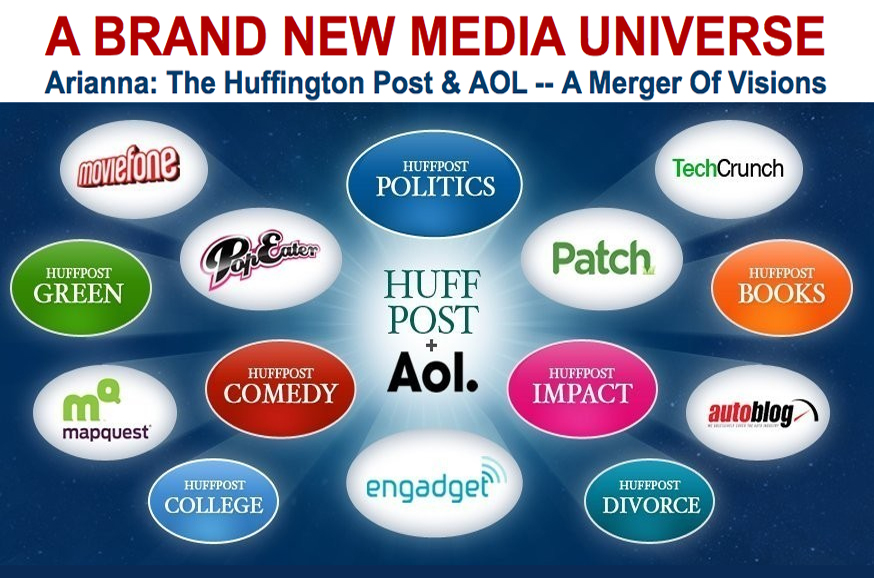 On Monday 7 February, to the astonishment of new media sceptics and believers alike, it was announced that AOL is to acquire news and opinion website Huffington Post for the remarkable sum of $315 million. But if it doesn’t deepen the journalism offering, how is this a good thing? By KEVIN BLOOM.

In a famous piece for the New Yorker magazine published in March 2009, Eric Alterman analysed the much-vaunted (and already near profitable) Huffington Post website as an example of a media form that might just replace the dead-tree newspaper in years to come.  “Almost by accident,” wrote Alterman of the emergent brand, “the owners of the Huffington Post had discovered a formula that capitalised on the problems confronting newspapers in the Internet era, and they are convinced that they are ready to reinvent the American newspaper.”

The feature looked back at the history of HuffPo, recalling the series of articles penned by Arianna Huffington in 2005 that attacked the military and foreign affairs reporting of the New York Times’s Judith Miller – in that event, Alterman insinuated, you not only had a small and pushy start-up taking on the might of America’s paper of record, you had it winning. The articles put HuffPo on the map, he continued, and from then on its collaborative network of bloggers were destined to challenge the mainstream media narrative week after week.

But Alterman had some giant caveats running through his analysis. For starters, re-quoting Arthur Miller’s observation that a good newspaper is “a nation talking to itself,” he noted that the thousands of comments many HuffPo stories generated would mostly offer nothing more edifying than “graffiti on a bathroom wall.” He riffed too on the site’s lack of regular sports and book coverage, and devoted a slew of paragraphs to its pitiable record when it came to old-school investigative journalism. The issue of editorial quality control – or the lack thereof – was a further issue for Alterman, as was the fact that where the esteemed American newspapers had hundreds of full-time employees on staff, HuffPo had less than fifty.

Which was obviously a key reason why, in March 2009, the site was poised to break even on revenues of between US$6 million and US$10 million a year. At the time, HuffPo’s unique visitor numbers were up around 11 million a month, and advertisers were salivating at its top-ten ranking amongst American newspaper sites.

Now, just under two years later, HuffPo’s game has been hyper-spaced into an entirely different dimension. As reported on Monday, AOL will acquire the site for US$315 million. The purchase, said to be comprised of US$300 million in cash and US$15 million in shares, will see co-founder Arianna Huffington take on a role as president and editor-in-chief of a new unit to be named Huffington Post Media Group; her managerial portfolio will include AOL’s news operations, as well as various media enterprises like TechCrunch and Mapquest. The total unique monthly visitors that the partnership is expected to attract is an incredible 100 million.

The question observers and pundits around the world will today be asking: what does this mean for media and journalism going forward? Perhaps the first place they’ll want to look for an answer is the numbers. Since early 2009, HuffPo’s stats have risen to 25 million unique monthly visitors, with total revenues for this year expected to come in at US$50 million. If the optimistic 30% profit margin is achieved, that amounts to a forward price-earnings ratio for the acquisition of 21:1, not a bad deal by anyone’s reckoning. But AOL, who have been floundering since the disastrous crash of their merger with Time Warner, will no doubt want to see a good return on their investment. HuffPo company executives insist that their site has turned a profit for the first time, and AOL will surely be tasking Huffington with ensuring that the trend continues.

Doing that in the contemporary web space means keeping overheads low and monthly visitors high. While the deal is inarguably a coup for Huffington and the second co-founder Ken Lerer – who launched the site in 2005 with seed capital of US$2 million – new media sceptics won’t be taking this as a cue to eat their words. They’ll most likely be asking how much of AOL’s cash reserves will be set aside for development of the HuffPo brand. Will Ms. Huffington be able to push for funds to create the investigative team she must know she’s in need of? How about those missing sports reporters? A dedicated and sophisticated books section?

In this context, it seems pertinent to quote Alterman’s concluding paragraph from the abovementioned New Yorker piece on Arianna Huffington and the death of the American newspaper. “Finally, we need to consider what will become of those people, both at home and abroad, who depend on [traditional quality newspapers] to keep them safe from various forms of torture, oppression, and injustice. ‘People do awful things to each other,’ the veteran war photographer George Guthrie says in Night and Day, Tom Stoppard’s 1978 play about foreign correspondents. ‘But it’s worse in places where everybody is kept in the dark.’ Ever since James Franklin’s New England Courant started coming off the presses, the daily newspaper, more than any other medium, has provided the information that the nation needed if it was to be kept out of ‘the dark.’ Just how an Internet-based news culture can spread the kind of ‘light’ that is necessary to prevent terrible things, without the armies of reporters and photographers that newspapers have traditionally employed, is a question that even the most ardent democrat in John Dewey’s tradition may not wish to see answered.” DM