Egypt prepares for day of reckoning, aka Day of Departu...

Egypt prepares for day of reckoning, aka Day of Departure 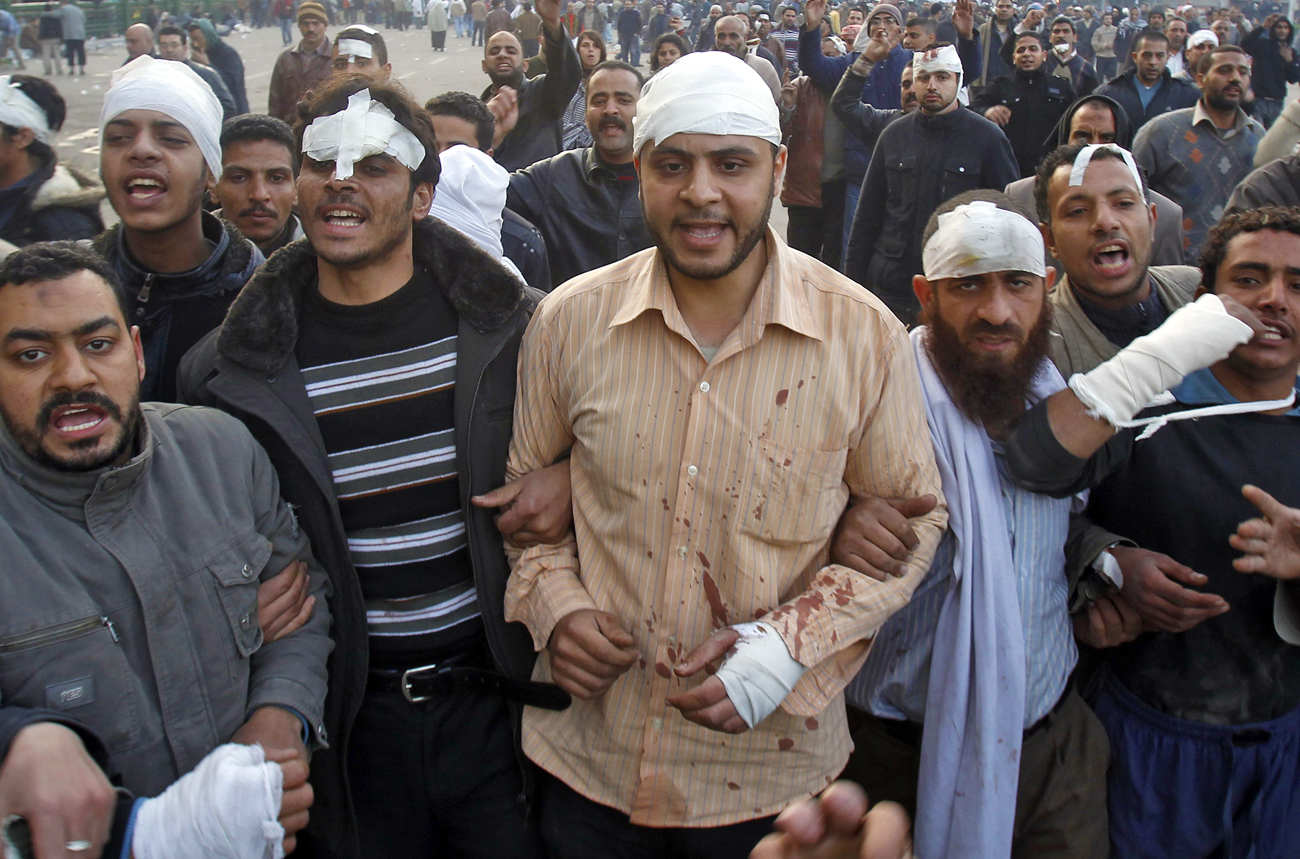 It is Friday morning and Cairo braces itself for what is expected to be the largest protests since the mass demonstrations began. After two days of vicious street fighting in and around Tahrir Square between pro- and anti-Mubarak protestors, this could well be the last roll of the dice for the opposition movement, which is desperate to finish the job it started, and finish it now. SIMON ALLISON reports from Cairo.

Thursday was something of a stalemate between the two groups. There appeared to be fewer pro-Mubarak supporters about, though these things are difficult to verify as they’re never all in the same place at once, rather fighting in the streets and alleys around Tahrir Square.  They targeted journalists specifically, and did not stop to ask questions; foreigners were assumed to be media (not an unreasonable assumption in the circumstances) and many were beaten, their equipment destroyed. There are also reports that the Hilton Hotel, where many journalists are staying and from where TV crews are filming, was broken into and equipment confiscated. State media has implicated foreign journalists in stirring up the protests, which is why they are considered legitimate targets, and today alleged Israeli spies were in the area posing as journalists.

While the opposition consolidated control of Tahrir Square yesterday, numbers are dwindling as thousands have been injured. People left in the square are the true revolutionaries, those who have wholeheartedly given up thoughts of outside lives and personal safety. They will not move or be moved from Tahrir Square. Photo: An opposition demonstrator throws a rock during rioting with pro-Mubarak supporters near Tahrir Square in Cairo February 3, 2011. Anti-government protesters and supporters of Mubarak clashed on Thursday near a central Cairo square in a re-run of overnight violence that killed six and wounded more than 800 people. REUTERS/Goran Tomasevic.

“I will die here. My blood has and will run on this ground. But I will not move,” said one demonstrator, who had been in the square since 25 January. His is not an unusual position among the demonstrators. In fact, it is the norm. And nor is it hyperbole, everyone in the square has already proved themselves willing to risk all for their beliefs. However, opposition figures are expecting a far higher turnout today, saying they expect some 20 million people to march on Tahrir Square against Mubarak. This is hyperbole – as this would require the entire population of Cairo, plus an extra 3 million people, to turn up.

Nonetheless, there will be a significant influx of people into the square today. The march will begin from various locations – most likely mosques – across the city, just after Friday prayers. The exact locations have been kept a secret until this morning. Friday prayers are always politically charged affairs during any kind of unrest in the Islamic world. Aside from the religious significance of the day, there are good practical reasons for this – authorities, no matter how repressive, will always struggle to justify banning Friday prayers, which means there is a legitimate reason for large numbers of people to gather together and as Friday is always a weekend, people are free to attend. Photo: Egypt’s Vice President Omar Suleiman talks in a pre-recorded interview on state television February 3, 2011 in this still image taken from video. Suleiman said the president will not put himself forward for the presidency again, he said in a pre-recorded interview on state television on Thursday. He also said the country had “at least $1 billion lost in tourism in the last nine days” and that 1 million tourists had left during the turmoil. Reuters/Egyptian television

As the prayers finish, so the march will begin. Organisers are likely to plan the route into Tahrir Square to pass as many important buildings and monuments as possible, because these will be heavily guarded by the military who will do what they can to prevent trouble in front of sensitive areas such as government ministries, and this will probably include making sure the two opposing groups are separated in these areas.

There is some hope among anti-Mubarak protestors the government support has exhausted itself; that, to paraphrase a sentiment shared by much of the opposition, he has run out of prisoners to coerce and thugs to hire. This seems unlikely. With vice president Omar Suleiman affirming last night there was no chance of Mubarak stepping down before the elections, and given the vociferousness with which Mubarak has already mounted his own defence, it would be a surprise if the president doesn’t fight with everything he’s got.

Hosni Mubarak himself told Christiana Amanpour in an interview that he would love to leave now, that after 62 years in public service he is tired, but said the country would descend into chaos with Muslim Brotherhood taking over.

But ultimately, how today unfolds will be determined by the simple matter of turnout. If the people arrive in their millions to defy Mubarak, then his “hired thugs” will disappear and Tahrir Square will be celebratory. This would give the opposition movement an unstoppable momentum. If turnout is poor, then prepare for a bloodbath as Mubarak tries to dislodge protestors from the square and solve the problem once and for all. Either way, the stage is set; what happens this afternoon will determine Egypt’s future. DM