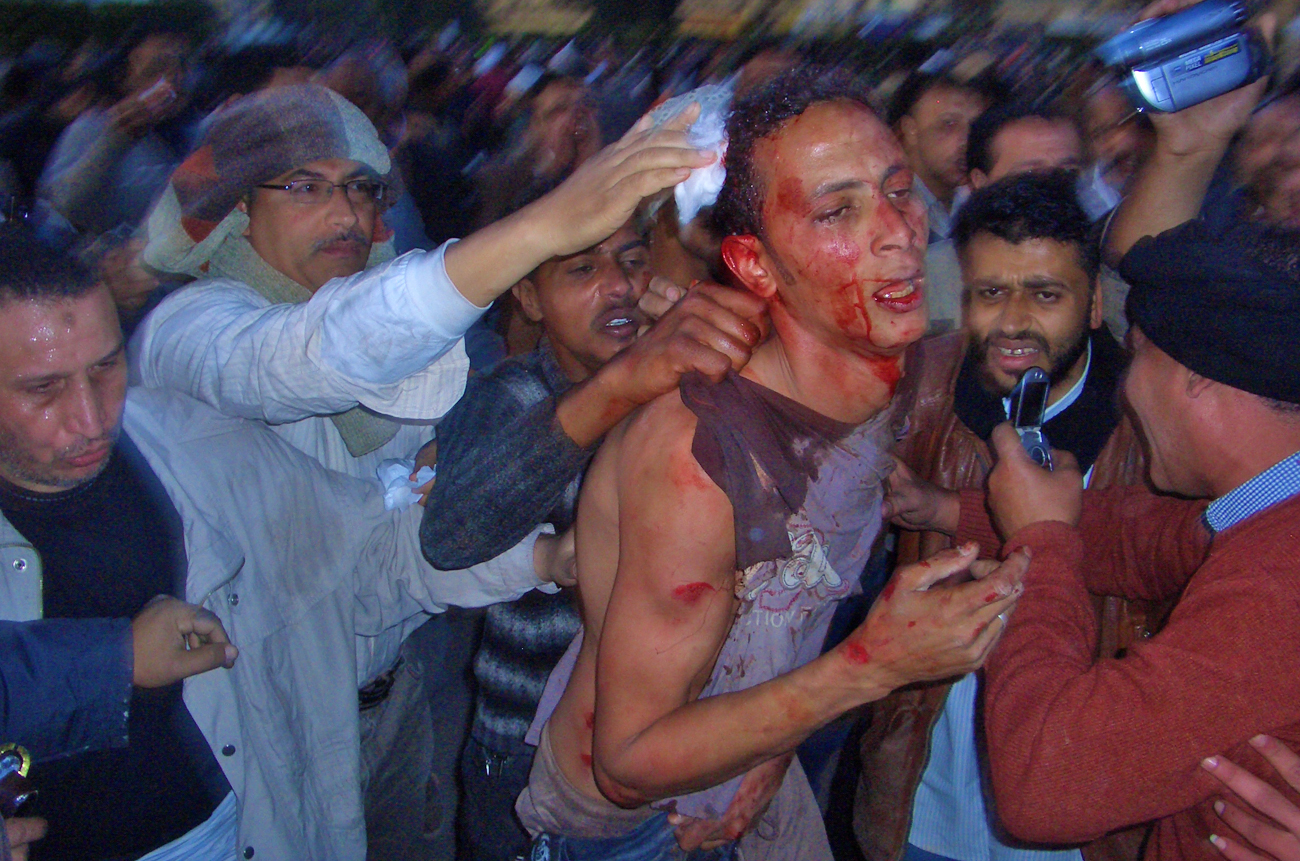 It is 11:00 on a sunny Cairo morning. The streams of smiling, joyous people pouring into Tahrir Square do not know that in a few short hours they will be locked in hand-to-hand combat with rocks as their best weapon. A carnival atmosphere prevails. Blankets laid out, picnics unpacked, songs sung; President Hosni Mubarak’s concessions of the previous evening have put the people in a very good mood indeed. They feel they’ve forced his hand. With unfailing hospitality, food, drink and sweets are shared with all in the square, Egyptian and foreign alike. Foreigners are welcomed by the demonstrators. “You must tell the world about us, about the Egyptian people,” says one. “It is the time for Mubarak to leave us in peace.”

Mubarak’s offer to step down in September is met with almost universal derision by those assembled. “We know his tricks,” says a protestor. “He will do something here, and change something there, and come to all of our houses, all the people here, and beat them. And then we will have Hosni Mubarak forever.”

But Mubarak’s speech, and his apparent concession, has taken its toll. Participation in today’s march is down hugely. Estimates vary, but the day before was measured in the hundreds of thousands, and today’s only in the tens. There are a lot of people who are willing to put up with a few more months of Mubarak. Photo: Pro-government demonstrators (front) face-off against anti-Mubarak supporters near Tahrir Square in Cairo February 2, 2011. Opponents and supporters of Egypt’s President Hosni Mubarak fought with fists, stones and clubs in Cairo on Wednesday in what appeared to be a move by forces loyal to the Egyptian leader to end protests calling for him to quit. REUTERS/Mohamed Abdel Ghany

The pro-Mubarak forces attacked mid-afternoon from Ramses Street, leading with an old fashioned cavalry charge – eight horses and a camel run full tilt into the anti-Mubarak crowd. The defenders have had only a few minutes to prepare, for they had been planning for a peaceful march like the previous day. Demonstrators had been stripped of weapons as they entered Tahrir Square by organisers, who collected quite an arsenal – guns, knives, bottles and even a sword. Demonstrators also had to provide IDs, supposedly to weed out Mubarak plants, although it seems fanciful to think one can recognise infiltrators from a brief scan of a grainy ID photo. And, as it happened, the checkpoints missed quite a few of Mubarak’s men, who gathered together and, at the appointed time – roughly coinciding with the cavalry charge – formed a flash mob which attacked the frontline of the demonstrators from behind.

There was much speculation in Tahrir Square on Wednesday about from where Mubarak had drawn his men. It has subsequently been confirmed that a number were plain-clothes policemen, a tactic which enraged the demonstrators and served as proof, if any were needed, of Mubarak’s low cunning. A number were recruited from prison – most of Egypt’s jails are now empty, and a fair few of their former occupants were in evidence today, their loyalty bought with money and, in bitter irony, that most elusive right for  which the anti-Mubarak protestors call most often – freedom. The remainder, and this group should not be underestimated, has a genuine loyalty to the Rais, the President, and have voluntarily joined his defence. As one demonstrator commented: “Egypt is divided between those who need Mubarak, and those who don’t.”

In the initial chaos of the attack, word took a while to reach the carnival in the centre of the square. From that vantage point, there wasn’t much to see bar the distant arcs of rocks being exchanged. From here, the fighting looked almost gentle. As the gravity of the situation began to sink in, the mood changed palpably; speeches grew more strident, the chanting louder and almost everyone kept a nervous eye on the position of the frontline.

But some, incongruously, carried on business as “normal”. The tea cart kept selling hot brews, men young and old lay on the grass in leisurely siesta and small children played in the folds of their mothers’ skirts.

Two banks of speakers had been set up in the centre of the square, well away from the action. It took a while to get them going. When they started working, it was to repeat the same few messages: “Get out Hosni Mubarak”; “Down with the regime”; and exhorting the young men, the “shabab”, to get themselves in the thick of the action. Above the speakers dangles an effigy of the president himself, hanged from a traffic light.

When the young men, duly exhorted, arrive at the frontline they join the back of a solid wall of men. Here they wait to take their turn – as the injured stumble or are carried out, so they rush in to take their place. Their main weapons are stones, but also whatever else comes to hand: piping, sticks, even the side of a dismantled rubbish skip, carried enthusiastically by four pairs of hands; for all their efforts, somehow its utility seems doubtful. The fighting is fast and hard and there is a steady stream of injured. Soon stones become scarce. They’re not a reusable weapon – unless they’re thrown back, of course. More rocks are ordered. The old men and the young boys, and some of the women, get to work prying paving slabs apart, lifting them high into the air and then smashing them onto something hard. The new rocks are then transported by runners in pairs who balance them precariously on strips of canvas sacking. Boxes would have been more efficient, but there are no boxes in Tahrir Square;  they’ve all been torn apart to make placards.

At one point, a scuffle emerges some distance from the fighting. A large man in a gray galibeya takes off his shoe and runs into the melee, hitting a terrified young man – perhaps 20 – on the head with the sole. The young man is crying and shaking with fear. “La, la; I’m with you. By god I’m with you, I’m not with Mubarak.” Someone steps in: “Find someone who will vouch for you, then we’ll let you go.” They walk him through the crowd as he scans for a familiar face. He finds one eventually, and his captives become his comforters, taking him somewhere quiet to recover.

A little later there is a similar scuffle, this time with a genuine Mubarak stooge. He is bleeding from his right ear, and his clothes are being ripped off. There are about 12 people in the mob which surrounds him – none of them friendly, but some friendlier than others. About half want to beat him senseless, while the other half urges restraint. Restraint wins, and he is bundled into an army holding area where captives are kept. It’s also a medical area, and to get through he has to shuffle past a large, half-naked corpse of a man, medics are desperately trying to revive him by pinching his nipples, hard, but to no effect.

Watch: In Egypt, Hundreds Hurt as Factions Clash in Cairo Streets, from PBS

The conflict continued like this until sunset, when the tenor changed dramatically. Molotov cocktails – an absurdly fancy name for a most unsophisticated weapon – made their first appearance, with both sides tapping into secret stores. The pro-Mubarak protestors grew more determined, boosted by reinforcements, and started pouring in from different fronts; their renewed frenzy perhaps echoing Mubarak’s own rage against the dying of the light. The anti-Mubarak crowd, although stretched, held firm, even as the first cracks of gunfire were heard.

And so it continued all night long – push and counter push, with both sets of protestors dwindling in number; the revolutionaries retiring to lick their wounds in preparation for another battle, while Mubarak’s men were perhaps thinking that tomorrow is another payday. And throughout it all the army was passive; its tanks in prime position, soldiers armed and at the ready, and helicopters circling ominously overhead all day long. Perhaps the great irony of Wednesday’s violence is that neither side can claim victory, no matter how bravely they fight; the kingmakers are wearing desert fatigues and are just waiting for everyone else to tire themselves out. DM