Nightmare at Baragwanath refuses to end

Nightmare at Baragwanath refuses to end 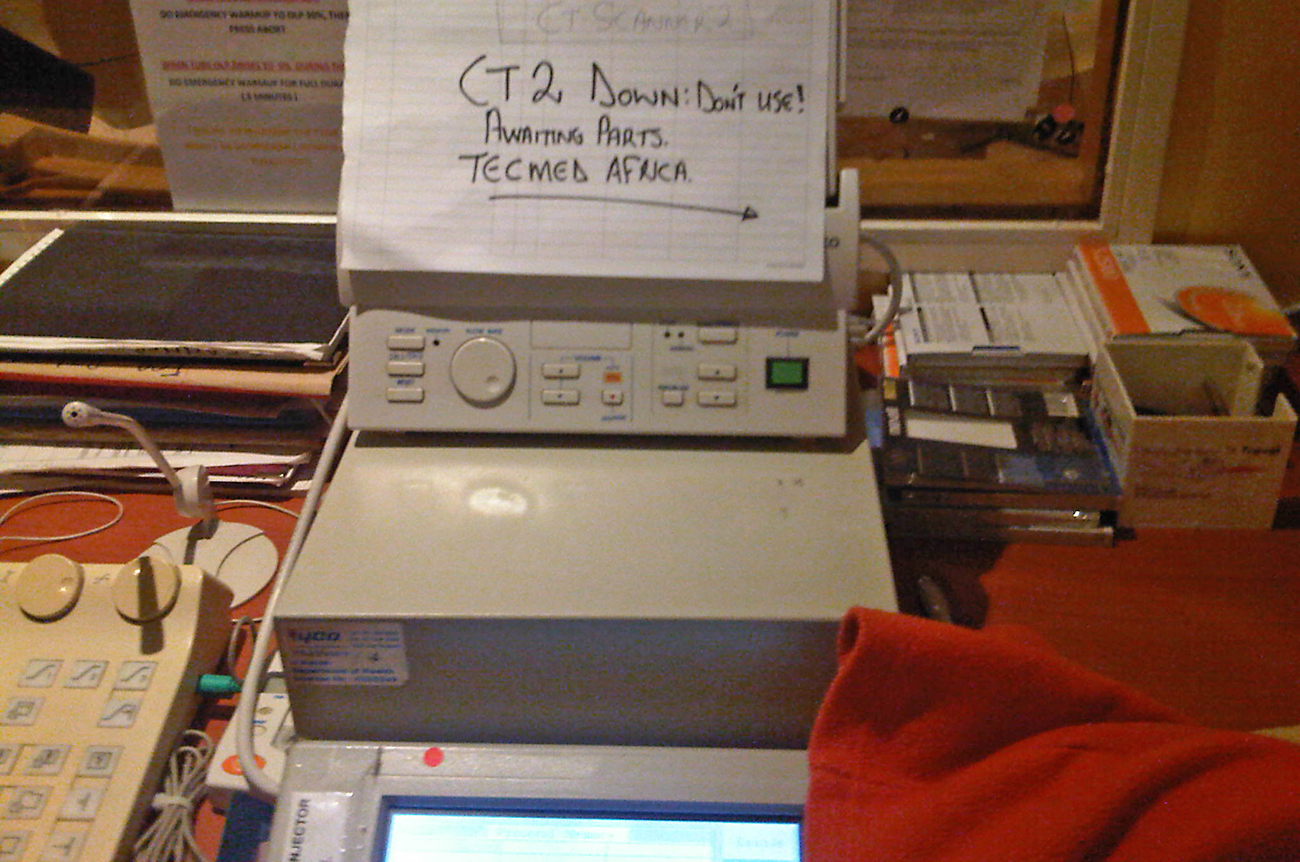 For two days this week, ALEX ELISEEV floated around like a ghost inside Soweto’s Chris Hani Baragwanath Hospital, investigating how it copes with two mortally wounded CT scanners. He spoke to doctors and patients, and heard horror stories of unnecessary surgeries and life-threatening backlogs. He left with an unshakable feeling that the hospital’s problems are, in many ways, identical to those of South Africa as a whole.

I drove up to the side entrance early on Monday afternoon. I discovered this gate during the violent public servants strike last year, and knew it was an easy way to slip unnoticed into the sprawling hospital. “The more arrogant the better,” my source had told me. “Just pretend you’re a doctor from the Gen.” I was never all that good at the covert stuff, so I rolled down my window, put on my best inpatient face and told the security guard where I was heading. How many journalists do you know who look like doctors anyway?

My first meeting was with a senior doctor, who has worked at the hospital for about a decade. I sat down, asked my first question and watched as an avalanche of complaints dislodged from the mountain top and thundered towards me. I was told the hospital has a pair of ancient and outdated CT scanners. One is always broken. One works from time to time. And this weekend, both were bust. This meant emergency cases had to be referred to other hospitals and out-patients (the ones that weren’t going to drop dead immediately) were sent away and given new appointment dates.

To put this in context, Bara is one of the largest hospitals in the world. It has around 3,000 beds and takes in patients from various neighbouring hospitals. It’s basically a small city… with streets, bus stops, cafes and apartment blocks. So the fact that it only has two scanners – which process up to 60 cases a day – is, in itself, a scandal. But doctors just shrug their shoulders. It will come as no surprise that promises about new scanners have been made. A shiny new radiology ward was built and was apparently due to be kitted out before last year’s soccer World Cup. The staff are still waiting.

Why the delay? Hospital management says there were “tender problems” with the purchase of three new scanners, which are due to be installed in phases. The Department of Heath had to intervene and – scout’s honour – the problems have now been sorted out. But while this bungle plays out, what is the situation on the ground?

The doctor says that not having CT scanners means doctors are forced to revert to diagnostic methods practised 60 years ago. Instead of using technology to glance inside a patient, some were subjected to invasive and dangerous surgery. To avoid leaving a “septic patient brewing”, some were rushed off to other hospitals – at times with a Bara specialist in tow. “People are being operated upon when perhaps a more conservative way of treatment would have been possible,” the doctor said. “In a nutshell, does it endanger people’s lives?” I enquired. The answer was clear: “Absolutely. Without a doubt.”

For outpatients, the broken machines mean more waiting. And possibly getting sicker. On Tuesday, I sat with around 20 such patients who had arrived at the diagnostic imaging unit for scans. Some had cancer, others mysterious pains and at least one a terrible cyst on his face. They sat quietly in a U-shape, waiting for the doctor. When he emerged, he told them they would all be sent home. The doctor was polite, apologetic and willing to help those who had questions. You could hear the frustration in his voice as he assured people there were enough doctors – but no equipment.

Some of the patients had been coming there since September. Now, they were told, they would wait until May or June. Many were worried about their illnesses. One woman said she feared her cancer was spreading. Most complained about how expensive it was to travel to the hospital and how difficult it is to get time off work. Those who had lined up appointments with specialists would have to cancel them, until the scans were ready. There was no riot. No outrage. Only submission to the system. And invisible anger.

Speaking to other doctors, I was told about various other problems at the hospital. A broken boiler room, a lack of clean linen; a shortage of porters, doctors pushing patients around the hospital; equipment ordered but never delivered; drugs not available; broken taps; delayed surgeries; and the list went on. I was shown photographs of crumbling walls, electricity boxes sealed with cardboard; piles of beds in corridors and filthy chairs in wards. I listened to the in-house jokes: “We never worry if there’s no water – because the toilets don’t work.” Why was all this happening, I asked. “Because the management has lost touch with the problems on the ground,” was the response.

Once it was safe to break cover, I called up the office of Bara’s chief executive, Johanna More, and asked if I could come up. I was given a few minutes in-between her meetings, and shot off as many questions as I could. More said that three scanners were on their way, and the first could be delivered this month. She claimed no emergency cases which needed scans had been affected – which was in direct contrast to what the doctor had told me. She also said that out-patients with malignant cancers were being prioritised. If this was happening, I certainly didn’t see it.

But the most worrying remark came when I told her that one doctor was so fed up with the politics of the institution that she was considering resigning. More said she didn’t want to discuss that, but added: “They are griping about a lot of things. Sometimes if you stay in a place for a long time, you become unhappy with everything.”

It seemed like a slap in the face to all those dedicated doctors, nurses and interns who push on despite the difficulties. Many do it for the love of the profession and the knowledge that they are making a difference. I spoke to one woman who had given up a career in the private sector for just this reason.

More seemed dismissive of criticisms, even in the face of irrefutable evidence (testimony, photographs, and so on). Speaking on radio this morning, she went as far as saying the doctors were “talking rubbish”. The response was similar to that around Johannesburg’s billing nightmare: “Crisis? What crisis?”

There’s no denying that running a giant hospital like Bara is a bureaucratic nightmare. But can there really be such a gaping canyon between the reality in the wards and those executive offices on the ninth floor? All this sounding familiar? DM

Photo: A broken CT scanner at Baragwanath hospital in Johannesburg.