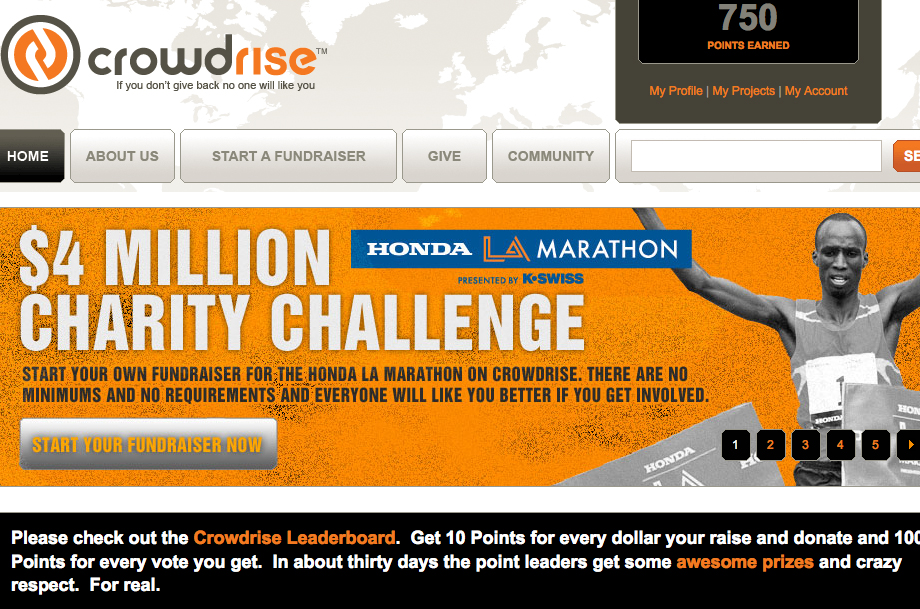 Edward Norton’s not your typical Hollywood movie star, which is probably why, together with Shauna Robertson and two smart brothers called Robert and Jeffro Wolfe, he’s helped create Crowdrise, not your average solution to fundraising. Part social networking, part crowdsourcing, part gaming and a whole lot of fun, Crowdrise could change the way people contribute to charitable causes. By MANDY DE WAAL.

The appearance of being socially relevant shows no sign of slowing down in Hollywood, and of course saving Africa is a hot cause. Angelina Jolie lost her heart to the continent in Sierra Leone after becoming the UN’s Goodwill Ambassador for refugees, Matt Damon and Ben Affleck ‘Ante’d up for Africa’, then there’s George Clooney who went to save Darfur and got malaria instead. Let’s not even begin to speak about Bono. If there’s a war, a famine or a disease as sure as Martin Scorsese is the god of Italian-American screen violence, there’s a populist celebrity headlining the cause.

This is why you’ve got to respect Edward Norton’s approach to philanthropy. The anti-celebrity actor and director was born into a family of cause advocates and was a social activist long before he was an actor. Norton’s late grandfather trailblazed inner-city low-cost housing, his father was the head of public policy for the US Wilderness Society and young Ed worked at his grandfather’s Enterprise Foundation after leaving high school. Norton is currently involved in a number of worthwhile environmental initiatives and runs the US branch of the Maasai Wilderness Conservation Trust for which he raised $1,2m by running the New York City Marathon alongside some Maasai and a few other celebrities. But what’s really cool is that the technology used by Norton and his team to fundraise more than a million in just eight weeks has morphed into Crowdrise. A US-based initiative that puts the fun back into fundraising, Crowdrise is a mash up of Facebook, crowdsourcing, fundraising, earning points and winning prizes that seems hugely successful.

“Our goal is to make giving so much fun that it becomes a part of the fabric of people’s lives,” says Robert Wolfe, who is a co-founder of Crowdrise with his brother Jeffro, movie producer Shauna Robertson (“Superbad”, “Knocked Up”, “40 Year Old Virgin”) and Norton. “Instead of people making donations at the end of the year for a tax write-off or responding to an urgent need such as that in Haiti, we wanted to make philanthropy so cool that it’s a fun part of your life. We’ve made giving back like Facebook.”

Here’s how Crowdrise works: If you’re passionate about a cause or project you go online and create a page for it. Then you petition your friends to help you raise funds. Your friends petition their friends and before you know it you’ve got this viral buzz going. Because the site allows micropayments, the viral volition enables people to fairly easily create campaigns that generate funds for charities. Some 1.6 million charities registered with the site and as users raise funds, they earn points that can be redeemed for prizes. On the site users rub shoulders with the likes of Norton, Will Ferrell and Mark Ruffalo who aren’t given star treatment just because they’ve been in a couple of movies. At Crowdrise the celebs have to earn their points just like everyone else and rub shoulders with the rest of the community.

“Obviously, if a friend asks you to get involved with a charity campaign, you’re much more responsive and willing to help because there’s a personal connection,” says Wolfe. “But organisations can also use Crowdrise to petition supporters, put together fundraising teams and turn supporters into fundraisers.”

There are a few reasons why Crowdrise will succeed. First, it is not a non-profit, but a sustainable business that takes 8% of what it raises including credit card charges. Secondly, the Wolfe brothers are pretty smart, having founded Moosejaw a sassy outdoor clothing company that became an online success because of its bad-ass attitude. The Wolfes know about customer engagement and how to get people to want to participate and fall in love with a brand. Lastly it’s all about community. It’s about friends and family raising money for charities that work in their back yard to make a neighbourhood or city great.

“Unlike Facebook and Twitter where the platform isn’t engaged in the community, but is strictly a neutral platform, at Crowdrise we are engaged and work with and help the community which has made our business not quite as scalable as your typical social media.” Wolfe won’t disclose numbers, but says the growth has been rampant and that Crowdrise continues to hire more and more people to cope with its success.

“We definitely want to take this business international, but right now we’re playing catch up and are only working with US based 501(c)(3)s. Now there are 1.6 million of them and they do work all over the world so we have lots of people fundraising for US charities that are doing work in Kenya for example, but we want to be able to expand our reach so that someone in South Africa can fundraise for local charities. That is one of a very long list of challenges we need to get to, but right now we’ve been so slammed we haven’t even had the chance to look into that kind of expansion,” he says.

The big idea behind Crowdrise? Well, like most other celebrity dreams, it is all about changing the world. Only at Crowdrise this is being attempted with a smart solution that marries technology and a savvy understanding of human behaviour to deliver the Facebook of fundraising. “We hope it is a way to get people to change the world, it is certainly our goal. We know it will be no small task and we have a really, really long way to go, but we have gotten off to a really good start and I can say with confidence that the idea of making fundraising and giving back fun is working,” says Wolfe. “We are excited, but are very humble about this project, because we don’t want to believe our own bullshit. I think if we keep doing the right things and being relentless about this idea of making it fun for people to give back we can achieve our goals.”

It is this humility and sense of self-irony that makes you want to root for Crowdrise. Let’s hope it goes global because with education, poverty, unemployment and a huge number of other challenges to conquer, South Africa has a many causes of its own that could be championed. DM

Read more: 4 Social Trends Impacting the Future of Online Fundraising in Mashable, Edward Norton Talks About the Future of Fundraising on BigThink, Social Networks Meant for Social Good, but at a Price in The New York Times, and Online charity becomes a personal appeal on CNet.