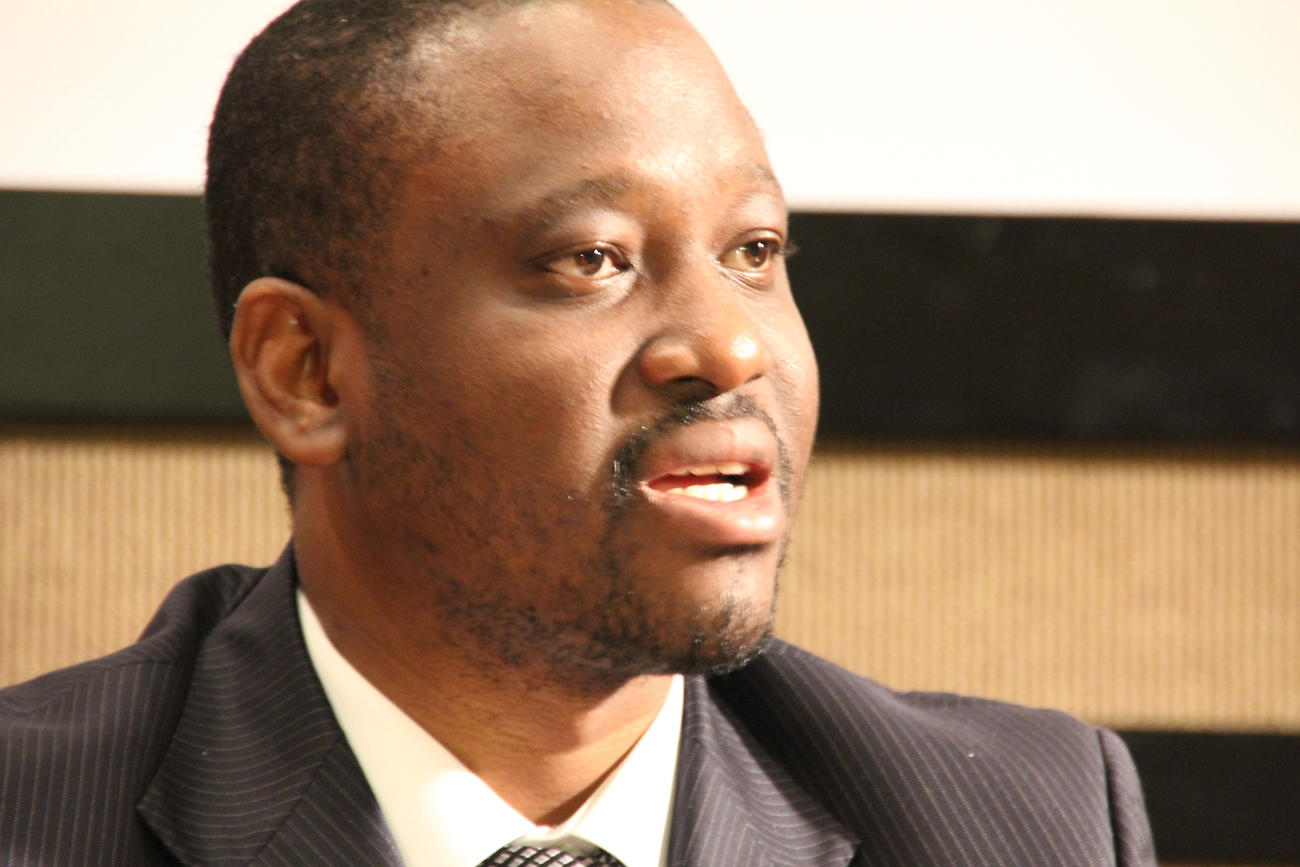 The Prime Minister* of Côte d'Ivoire, Guillaume Kigbafori Soro walked into Sandton's Saxon Hotel briefing room on Thursday after a heavy day of talks with South African officials. He exuded the air of a man slightly bewildered by having to explain again and again a fact that to everyone (except a few African presidents) seems simple enough to understand: Allasane Dramane Outtara won the 2010 presidential election. By BRANKO BRKIC.

His trip so far has included Nigeria, Equatorial Guinea, Zambia and Congo Brazzaville, with Burkina Faso between him and the AU meeting this weekend in Addis Ababa. But his most important and toughest part of the trip had to be South Africa.

If you’ve spent the past few months trekking in the Andes, you may have missed the Ivorian presidential election on 28 November 2010, and that it produced a clear winner, Alassane Outtara, and a clear loser, incumbent President Laurent Gbagbo. And, as seen many times before, Gbagbo woke up to the fact that he still controlled the armed forces and had friends in the constitutional council who, citing irregularities, promptly announced him the winner. He has stayed put ever since, hoping to wrestle a Zimbabwe- or Kenya-like deal that would keep him in power.

Soro himself is not a stranger to tough negotiations and the odd fight. A former rebel chief from the north, he rose to be leader of Gbagbo’s Patriotic Movement of Côte d’Ivoire in the civil war. Later, in 2002 he became secretary general of the newly created New Forces. He was part of the 2003 peace deal and was in and out of the Ivorian government until he became Prime Minister in 2007, with Gbagbo as his President. He was lucky to escape the assassination attempt that claimed four lives when his airplane came under rocket and machine gun attack.

It was Soro who told Gbagbo that he’d lost the election, an act for which he was promptly fired, only to be re-appointed by the recognised winner, Allasane Outtara. And now, he is walking into a roomful of journalists, having to discuss the obvious.

He spoke to SA’s deputy president Kgalema Motlanthe and ANC chairwoman Baleka Mbete about how he believes South Africa is looking for a peaceful solution. He explained the role of the electoral commission and constitutional council. Now that South Africa has all the necessary information, he believes it will make the right decision and support the will of the people of Côte d’Ivoire.

No, there’s no way president Outtara will accept any Zimbabwe- or Kenya-style government of unity, although he will include some of the Gbagbo’s ministers, which is also one of demands of the AU, to allay fears of exclusion and revenge.

The UN was part of the Ivorian elections from the start as agreed to by all in Pretoria in 2005, and, together with AU and Ecowas, it has certified the results and now has the responsibility of finishing the process. Nigerian foreign minister Odein Ajugomobia, has warned Gbagbo he could now face increased and targeted sanctions that would, hopefully, not hurt cocoa producers, but impact on his ability to collect taxes. Gbagbo on Wednesday and Thursday moved to halt banking and electricity distribution. Should Gbagbo still be unmoved, Soro argued the best option would be a “surgical military attack” that would, in theory, remove only him and his most loyal guards.

The Ivorian constitution prohibits sending any of its citizens into exile and Outtara will not kick Gbagbo out of the country.

From a legal perspective, it is difficult to understand the problem that Outtara and Soro are facing. The result of the second round of the Ivorian election is clear: The Daily Maverick has obtained a copy of the certified tally as well as the certification of the elections as free and fair by YJ Choi, the UN certifier. The numbers are clear and unambiguous:

The results were also certified by the AU and Ecowas, as well as many other observers, which, speaking in electoral terms, should be enough for anyone to be satisfied and move on. But, as it was with Zimbabwe and Kenya, nothing is simple on the continent of Africa. Photo: Then Ivory Coast President Laurent Gbagbo, then South African President Thabo Mbeki and then Ivorian rebel leader Guillaume Soro chat at the signing ceremony for a new peace agreement reached after three days of talks in Pretoria April 6, 2005. Ivory Coast’s civil war foes agreed after talks in South Africa to end war once and for all in the world’s top cocoa grower, a country that has been split by conflict since the end of 2002. REUTERS/Jacoline Prinsloo

As clear as the election results are, so muddy is the underworld of different interests and influences that are actually stirring the Ivorian pot.

Some of them hail from the country’s colonial past, with their old rulers, France, having a hand at just about every level of power. Both camps accuse each other of being substantially dependent on France, with Gbagbo accusing Outtara of also being a US puppet.

On Tuesday, 48 hours before Soro’s visit, 37 of Gbagbo’s supporters staged a sometimes-angry protest in front of the US embassy in Pretoria, demanding “US and France’s withdrawal from the Ivory Coast’s internal affairs” and declaring that “Ivorians in their majority know that the man they have put their trust in is Laurent Gbagbo”. And it was all about “Paris’s and Washington’s evil deeds.” Then overlay it with an increasing rivalry between South Africa and Nigeria and their not-always quiet fight for the supremacy, often through blocks they dominate, of SADC and Ecowas. The Ecowas side is deeply annoyed by South Africa’s refusal to accept the Ivorian results, especially because they kept quiet on the Madagascan crisis.

And then there’s a long list of unsavoury friends that South Africa has gained since the advent of democracy, with some of them having a lot to lose should Gbagbo be escorted out of the presidential palace. Jose Eduardo dos Santos, Angola’s President since 1978 and President Zuma’s great new friend, has declared that the UN has deceived the world and Angola cannot accept the results of the Côte d’Ivoire election. Another beacon of democracy, Ugandan President Yoweri Museveni (in power since 1986) also believes the AU should probe the election. And, of course, that ultimate defender of democracy, Zimbabwe’s Robert Mugabe (in power since 1980), is also on Gbagbo’s side.

From his side, Gbagbo is spending money on advertising his cause, quite a bit of it with South Africans. He recently hosted the ACDP’s Kenneth Meshoe, who exclaimed, “Our conclusion is that Gbagbo is (the) lawful president of the country, his presidency is supported by the constitution and the laws of the land”, on his return to Johannesburg. On Friday, a group of South African journalists left for Abijan, a trip paid for by Gbagbo.

It is obvious that Côte d’Ivoire itself is a battleground where the future of African democratic processes are being fought over. In 2011, 17 more African countries will hold major elections: Benin, Burkina Faso, Cameroon, Cape Verde, Central African Republic, Chad, DRC, Djibouti, Egypt, Gabon, The Gambia, Liberia, Madagascar, Mauritania, Mauritius, Niger, Nigeria, Rwanda, São Tomé and Príncipe, Seychelles, South Africa, Tunisia, Uganda, Zambia and Zimbabwe. Should Gbagbo stay in power, then every losing-but-army-controlling incumbent president will feel it is reasonable to expect his rule to be extended indefinitely.

So South Africa now holds a key to the future of African democracy. It is difficult to see how Gbagbo can continue defying the will of his own people if the continent’s biggest power and the member of the UN Security Council decides to accept the already-certified election results. Will it happen? We certainly hope so. South Africa is committed to democracy within its borders and will, at some stage, have to stop cherry-picking the states to which it will deny the same right. Because if it maintains its quiet support of Gbagbo, it could set African democracy back many decades. DM

PS: And just as this article was being completed, the news came from Addis Ababa that, “The African Union said on Friday it would form a panel of heads of state to solve the leadership crisis in Côte d’Ivoire which would come up with a legally binding settlement within one month.” The only way this can be seen is at the very least as a temporary victory for Gbagbo. And for dos Santos, Museveni, Mugabe…