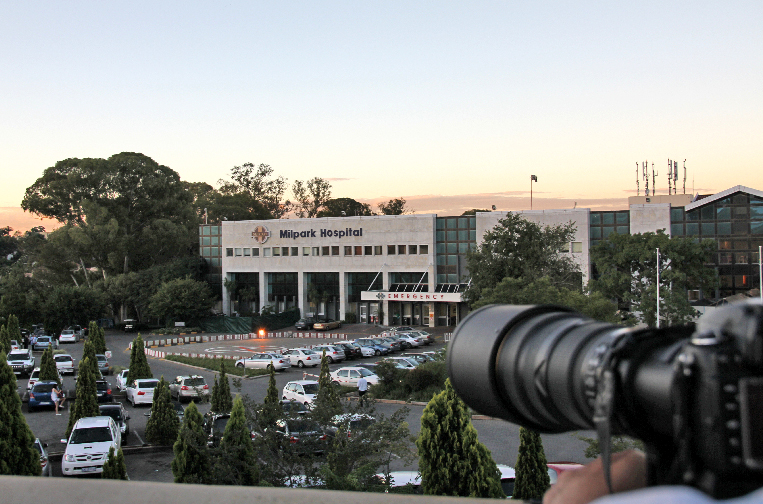 The media is used to being lied to, the public perhaps only a little less so. There are some things you don't lie about, though – even if it is a lie that created only by the passage of time and your inaction. And if you absolutely must lie about such a matter, say, the health of Nelson Mandela, don't you bloody dare blame the victims for the consequences. By PHILLIP DE WET.

It’s not often spoken of, certainly not publicly, but a great deal of planning and an enormous amount of money has gone into preparing for the death of Nelson Mandela.

The secrecy is partially commercial, with those involved having sworn strict non-disclosure agreements (in the case of media organisations that have already spent millions of rands to beat the competition with coverage), and partially a matter of respect. However inevitable, it is never comfortable to talk about death even in the abstract, never mind the death of a specific person. When that person is the world’s most adored living icon and one of the greatest men ever to walk the earth, well, you just tend to shut the hell up.

But make no mistake, those closely involved won’t be playing it by ear when the time comes. Television stations in particular have long-laid and baroquely elaborate plans in place. So does the Presidency, the military, and the police. We can only assume that the Nelson Mandela Foundation, which serves as a post-presidential office as well as a charitable organisation, has done a little bit of its own thinking in that regard.

Which makes the abject failure of everyone, with the somewhat startling exception of the media, all the more amazing.

The Nelson Mandela Foundation (NMF) lied. It first lied off the record, on Wednesday saying that Mandela would not be admitted to hospital but would leave after tests had been done. Then, later in the day, it lied on the record. “We can confirm that Mr. Mandela is at Milpark hospital undergoing routine tests,” it said in the only official statement of any kind on the day. Early Thursday afternoon the Presidency chimed in with its own statement, which added absolutely nothing to the sum total of knowledge about Mandela’s state of health. “President Mandela is comfortable and is well looked after by a good team of medical specialists,” is all it had to say. It then seemed surprised, despite the fraught emotional environment, when people pointed out that “comfortable” and “very gravely ill” are not mutually exclusive concepts, but did nothing to clarify matters.

Thirty-one hours elapsed between official confirmation that Mandela was in hospital and official word, albeit ever so vague, of what specifically ails him. It would be another 12 hours after that – assuming, at the time of writing, that a scheduled media address by acting President Kgalema Motlanthe goes ahead – before real details, if any, would emerge.

During that time, extraordinary things happened. Prayer groups met, schoolchildren made get-well cards, foreign journalists descended on Johannesburg, cars pulled off roads so the occupants could better hear radio reports, traders watched commodity prices and exchange rates with unusual interest, and, we strongly suspect, some extreme right-wing lunatics checked the ammunition and food supplies they had gathered in anticipation of their long-awaited swart gevaar apocalypse.

What mostly happened, though, were rumours of Mandela’s death. They ran in public over social networks, they flowed in private SMSes. At points during the day even mid-level ANC figures could be found who would confidently say that Mandela had passed on, based on utterly reliable word from a dizzyingly high-placed friend.

Three things drove those rumours: a genuine concern about the health of a loved one; the inevitable need to feel (and be seen to be) connected, well informed and ahead of the curve; and a complete lack of information. Two of those factors are unavoidable. The third is unforgivable.

It is mostly luck that the consequences were not more dire. The ambulance carrying a critical ill patient to Milpark Hospital wasn’t delayed all that long in the traffic jam that formed as journalists camped outside and security guards checked boots for illicit cameras. No cameraman was run over by a speeding car on the decidedly pedestrian-unfriendly bridge that overlooks the hospital. Those who were subjected to a scrum of cameramen outside their car windows, the likes of Jeff Radebe and Winnie Madikizela-Mandela, are used to such treatment and unlikely to suffer long-term emotional trauma from experiencing it yet again. And no crazed white dude decided that the great man had passed and gone to a township to start killing black people in pre-emption of the attack he is convinced would follow.

What did occur was misplaced blame. The Presidency, early Thursday afternoon: “The media should balance the quest for stories with acting within the bounds of human decency and ensuring the respect for human dignity. The doctors also need to be allowed to do their work without undue pressure.” The ANC, Thursday morning: “We call on all South Africans to remain calm regarding the hospitalisation of Madiba and not press any panic buttons, as there is no reason for that whatsoever.” Ironically enough, the ANC in its statement also sought to reassure South Africans that they’d be told of any significant developments, while destroying all potential trust in that promise by saying he was “undergoing routine medical check-up” (sic).

People speculated, and the media peered through car windows for any tiny sign from which something could be extrapolated, because there was nothing else to do, and nobody to trust; that much had became clear as soon as grandchildren and other family members started arriving at the hospital on Wednesday. Neither can be blamed.

But somebody will end up carrying blame, fair or not. “The parallels are certainly there,” says independent marketing and communications specialist Clive Simpkins. “Whenever there is over-control – and this is what  they are missing, they are missing the perceived fact that [Mandela] is considered public property – those controlling the flow of information get blamed.”

Simpkins is speaking, of course, of the backlash against the British royal family after the death of Diana Spencer, who became “the people’s princess” while the usually revered Queen was suddenly reviled for not grieving enough or publicly enough.

The Nelson Mandela Foundation is already feeling that backlash, perhaps because it is a faceless organisation and easier to cast aspersions on that then a wife or daughter or even spokeswoman. Instead of taking advantage of the sudden global upsurge in interest in Mandela – and raising funds with which to do good work, which he would surely approve of – the NMF has come perilously close to badly tainting its own image.

There are excuses, and we will surely hear many of them in weeks to come: the needs of the family come first, nobody wanted to jump the gun, there are many parties that need to co-ordinate around communication. None of them are acceptable.

We have a modest proposal, based on the events of the past week, which we think will serve South Africa and the world well the next time we find ourselves in this situation. Bring on the Arch.

If there is anyone who comes close to Nelson Mandela in terms of respect and admiration in the world today, it is Archbishop Emeritus Desmond Tutu. He is nearly universally trusted and truly gifted, not to mention enormously experienced, when it comes to guiding people through uncertainty and grief. He has endlessly proven himself willing to put his own needs aside in favour of the greater good.

So the next time the country is rife with anxiety and in need of comfort, just bring on the Arch. Don’t make us go through all of this again. DM