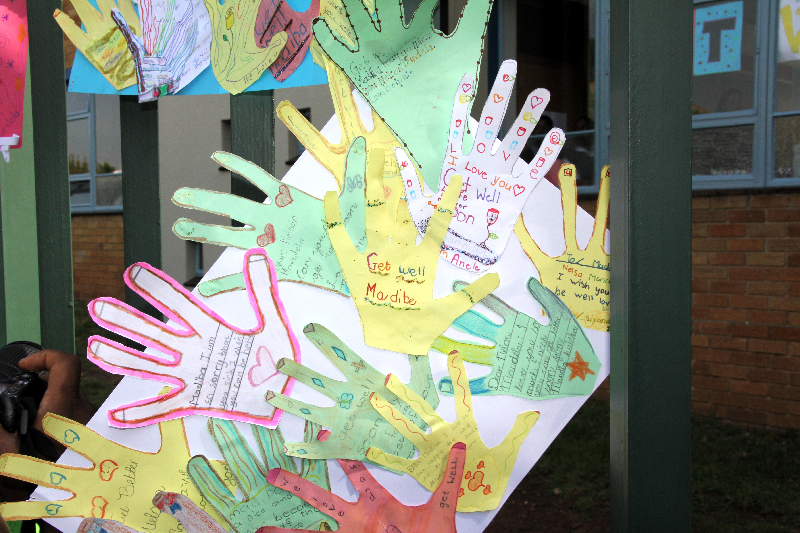 Journalists gathered at Milpark Hospital in Johannesburg on Wednesday and Thursday, anxious for news (and visuals to go with it) after it was confirmed that former president Nelson Mandela had been admitted there. By mid-day on Thursday they had seen much but learnt little as speculation continued to swirl. By PHILLIP DE WET.

On Wednesday afternoon the Nelson Mandela foundation issued a statement, which read in its entirety: “We can confirm that Mr. Mandela is at Milpark hospital undergoing routine tests. He is in no danger and is in good spirits.”

That remained the only official word on his condition at the time of publication. The ANC issued its own statement, calling for calm but saying little else, and family members, government officials and hospital staff steadfastly refused to saying anything more.

The arrival of family members on Wednesday, however, seemed to indicate a health scare, as did the arrival of the likes of Jeff Radebe and an army doctor on Thursday. Various outlets turned to anonymous sources, who suggested that Mandela was suffering either from simple aches and pains, or had breathing difficulties. Photographers and camera crews staked out a flyover bridge overlooking the Milpark hospital on Wednesday evening, after being evicted from the entrance of the hospital. Metro police later tried to remove the group from the bridge – where they were a significant hazard to themselves and passing traffic, but eventually relented. The view the media contingent had of the main entrance to Milpark Hospital early Wednesday evening, as they watched and tried to extrapolate from the comings and goings. On Thursday morning the pupils of the McAuley House Catholic School made get-well-soon posters and affixed them to the school’s palisade fencing, just metres away from the Milpark Hospital entrance. The media, starved for visual illustration of the story, immediately descended on the school en masse. 12-year-old Jessica, who emerged to help put up the posters, became an immediate sensation. “He’s not sick, he’s just old,” she told the media pack. “If only the [Nelson Mandela] Foundation had her for a spokesperson,” one journalist muttered. Mid-morning on Thursday, a VIP vehicle flanked by bodyguards was aggressively waved past an ambulance – with flashing lights – waiting the queue of cars that formed as police searched vehicles entering the hospital for contraband cameras. The car, which according to other journalists was carrying Winnie Mandela (although we can not confirm that), made it into the hospital long before the ambulance. Even after a paramedic got out to shout that it was ferrying a patient in critical condition. Part of the police contingent guarding the hospital entrance and searching the boots of some cars.

Around 50 journalists remain camped outside the entrance to the hospital waiting for news, and capturing what tidbits they can. DM

Main picture: Get-well-soon posters made by pupils at McAuley House Catholic School, which is situated next to the Milpark Hospital entrance.

All pictures: The Daily Maverick.