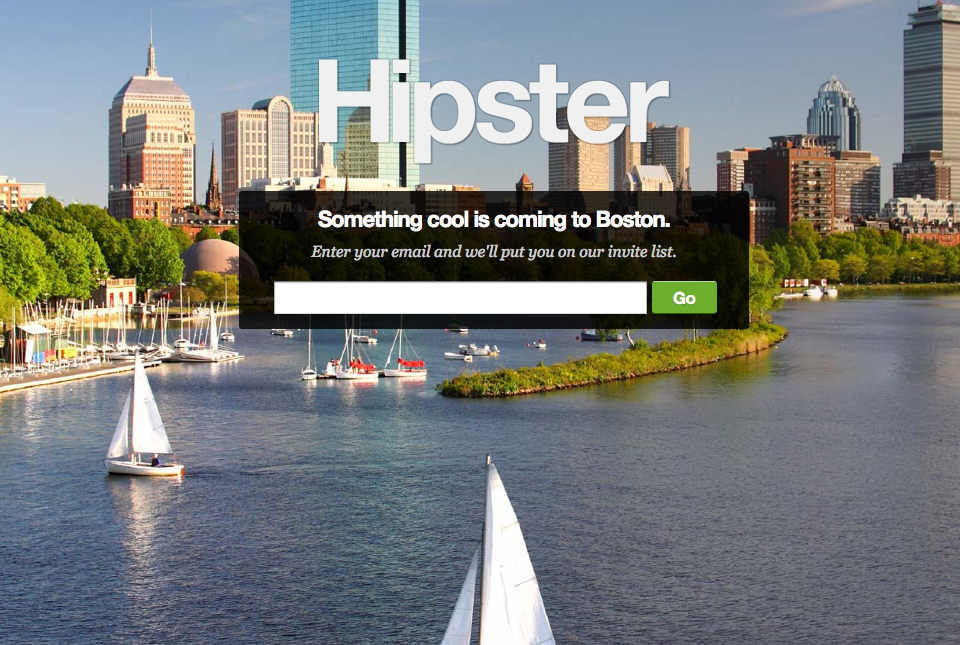 What to make of a startup that already has tens of thousands of signups without revealing what it does? Consider the signees more gullible than PowerBalance bracelet wearers and sneer accordingly, we suppose. But as social experiments go, Hipster may turn out to be quite fascinating. By SIPHO HLONGWANE.

Viral “coming soon” pages are nothing new. Fork.ly already did it. The idea is to suck people in by promising them first access to some new soon-to-be-launched something, if they stick their email address in a provided field and invite some friends.

The new one, called Hipster, works the same way. Yes – Hipster. The invitation to let our minds wander elsewhere on the Internet is already in the name. It doesn’t get much better when we visit the site, usehipster.com, where we’re greeted by a stock image of an American city (like a postcard in an airport gift shop), and the promise that “something cool” is coming to said city and, if we give them our email address, we’ll be put on their invitation list.

Here’s the bit where we sit up and take notice: Ever since launching the startup on 1 January, Hipster CEO Doug Ludlow (feel free to smirk) has refused to say what Hipster will do. “You come to this page, and you see a big, beautiful picture of your city, so clearly it has something to do with your city,” he said to The Washington Post. “I think we might have perfected the viral ‘Coming Soon’ page.” So far, the site boasts more than 17,000 signups. In less than three weeks.

Well, 17,001 signups, if you, ahem, count me. The urge to be among the first to discover the next trend overpowers cynicism. Being the first to jump on the next bandwagon is invaluable social networking currency.

According to TechCrunch, we already have a vague idea what Hipster might do. “At this point we’ve heard the words Yelp, Quora and location-based Q&A site being tossed around by sundry reporters, savvy Googlers and one ambitious tipster who sent us an in-depth analysis of its Javascript,” they said.

But that is completely beside the point, and like trying to deconstruct hipsters, a bit tedious. There’s nothing really there, just listless middle-class adolescents who are stifled by the confines of their sterile suburban existence. Goths and emos have sat at that street corner before.

What is Hipster, if not a plea from us to be pleasantly surprised? In spite of living in an ultra-connected world where anything that takes more than a couple of seconds takes too long, where every sensual demand can be assuaged from the comfort of our couches and where nothing surprises us anymore; we still want to be excited and titillated. You don’t have to be a hipster to acknowledge that.

Doug Ludlow has done the first part well. Our interest is piqued. Whatever the great surprise is, we’ll know come 1 February. The second part, that of fulfilling our expectations, will be impossible to discharge. I signed up as an experiment – to see just how short of my expectations the final result will be. The disappointment will be even worse for those who aren’t above being associated with the label ‘hipster’, who might imagine the new startup’s service to perhaps be a re-engineering of 1970s society using 21st century tools or an ironic play on Facebook or geolocation services like FourSquare.

But by tickling the fancies of the easily-distracted, Ludlow is inviting the opprobrium of the most fickle tribe in society. Hipsters are about as loyal as a stray cat. As any obscure band that ever played in skinny jeans and ironic T-shirts knows, what the hipster giveth, the hipster taketh away. Ask MGMT. DM