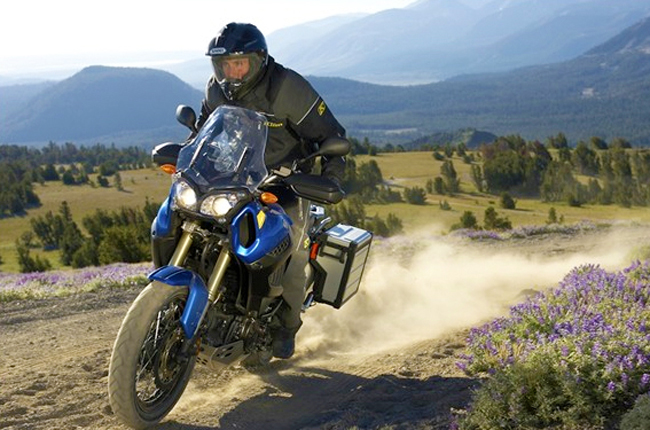 In 2004, actor Ewan McGregor and his buddy Charley Boorman rode from London to New York on motorcycles – the long way round. The documentary series on their epic 31,000km trek through Europe, Ukraine, Russia, Kazakhstan, Mongolia, Siberia, across to Alaska, through Canada to New York established BMW's GS bikes as champions of the dual-purpose two-wheeler world. Now Yamaha wants that crown, but its footwork is going to need some attention. By RéHANN COETZEE.

Just as very few SUVs actually hit the bundu, but look so damned cool, image counts with dual-purpose bikes too. Where KTM’s 990 Adventure is a major player in this market, BMW is the champ. And it’s here that the importance of “footwork” begins to count. KTM is more hardcore off-roader with 21-inch front wheel instead of a more comfortable on-road 19-inch, but BMW offers greater comfort on tar.

In the middle of 2010, Yamaha stepped into the ring with its new big “duallie”, the 1200cc twin-cylinder Super Ténéré.

Where BMW uses a boxer engine and KTM a V-twin, Yamaha opted for a parallel twin. On paper the BMW and Yamaha are fairly evenly matched in weight and power output. But contests aren’t decided on paper.

Side-on the Ténéré looks similar to the BMW and it’s clearly designed for the same game. But the engine is upright where the BMW’s lies flat, so the bike seems slimmer. That also raises its centre of gravity. Interestingly enough, the higher centre of gravity actually makes the Yamaha easier to manoeuvre at low speed, by hand in confined spaces

The Super Ténéré is better looking than its kid brother, the 660cc Ténéré. Its twin headlights make for an aggressive front view and the lights are very bright and highly visible – crucial in city traffic. But Yamaha presented The Daily Maverick with a bike that took some beating from other journalists – which shouldn’t be held against the bike, but did serve to highlight how crucial the deft footwork is where the rubber hits tarmac or dirt track as the case may be.

The knobbly off-road tyres we had make a huge difference once you get off the tar, but are very scary on the wet blacktop. And we’ve had plenty of wet blacktop lately.

The bike had also taken a beating at the hands of other journos before us and the ABS system had been disconnected. That added to its exceptional skittishness in the wet.

The ABS is quite a controversial point here because, unlike the BMW and the KTM, the Yamaha’s ABS system cannot be manually switched off. And as much as you need the safer braking offered by the system on a paved road, you definitely don’t want it on dirt. If the road surface is loose, the wheels skid when braking so ABS works against you. Imagine how scary that is along a mountain pass. The Super Ténéré also has a linked braking system, which means that applying the front brake will automatically also engage the rear brake. Not as scary as the ABS that won’t go away, but not ideal on dirt road where you might want to specifically control which wheel gets the brake force. However, for normal riding on paved roads this is a very  good feature.

A Yamaha dealer in Western Cape now sells an aftermarket gadget that can switch off the ABS and we suggest Yamaha have a listen to the market and offer that kind of functionality at some stage.

My colleague, Lance Rothchild, spent more time with the bike off the beaten track and wasn’t unduly fazed by the ABS issue.

“The ABS works well and, as much as some would prefer an option to switch it off, I didn’t find it compromised my riding or enjoyment of the bike at all,” he said. Maybe he’s just getting too old to notice the difference, but then again Lance is a member of the Africa Twin Club and these guys do know what to do off-road. And while we’re on the issue of stopping this behemoth, the puny brake lever was a real pain in the behind. It’s so small you battle to hit it and, if you’re wearing proper off-road boots, it’s even worse. The footpegs are ideal though, much better than those offered on the standard BMW R1200 GS.

Looking up, the Super Ténéré’s 1200cc engine is very lively and also uses a cross-plane crankshaft configuration like the R1 superbike does. It means the two cylinders fire at right angles and this gives torque characteristics like a V-twin would. As gratifying as the mid-range grunt is though, there is a bit of hesitance at revs just above idling speed, which means you need slightly more revs to pull away than you do with the BMW or KTM.

You won’t need therapy to deal with it, but it was an irritation.

That and the fact that, for some reason, Yamaha doesn’t think you need a gear-position indicator on a bike that costs more than R120,000. Yamaha is not the only manufacturer that suffers from that misconception, but it is rather disappointing on a bike that challenges the King of the Dual-purpose Hill.

Rothchild’s only criticism was the dissipation of heat from the engine. “The hot air that flows off the radiator on to your left leg can be a little irritating, particularly on a hot day in slow urban commuting situations.”

All in all, we came away pleasantly surprised by the bike. While our contender showed some suspect footwork, that can be rectified. I would fit the gadget that switches off the ABS and never ride on wet tar with knobblies. But owning a Super XT1200Z Ténéré would not break my heart. Rothchild summed it up rather well: “I think it’s a tremendous option in this category and one that gives the BMW 1200GS a serious run for its money. Would I like one in my stable? Damn straight I would!” DM

The 2011-spec bike (no First Edition branding and black as another colour option) will sell for R129 999 and accessories are bought at normal retail pricing. These include a pannier set with mounting brackets, a top box, an aluminium bash plate, a headlight protector, lowered seat, taller windscreen, side wind deflectors, heated grips, crash bars, spot lights and a tank bag.)