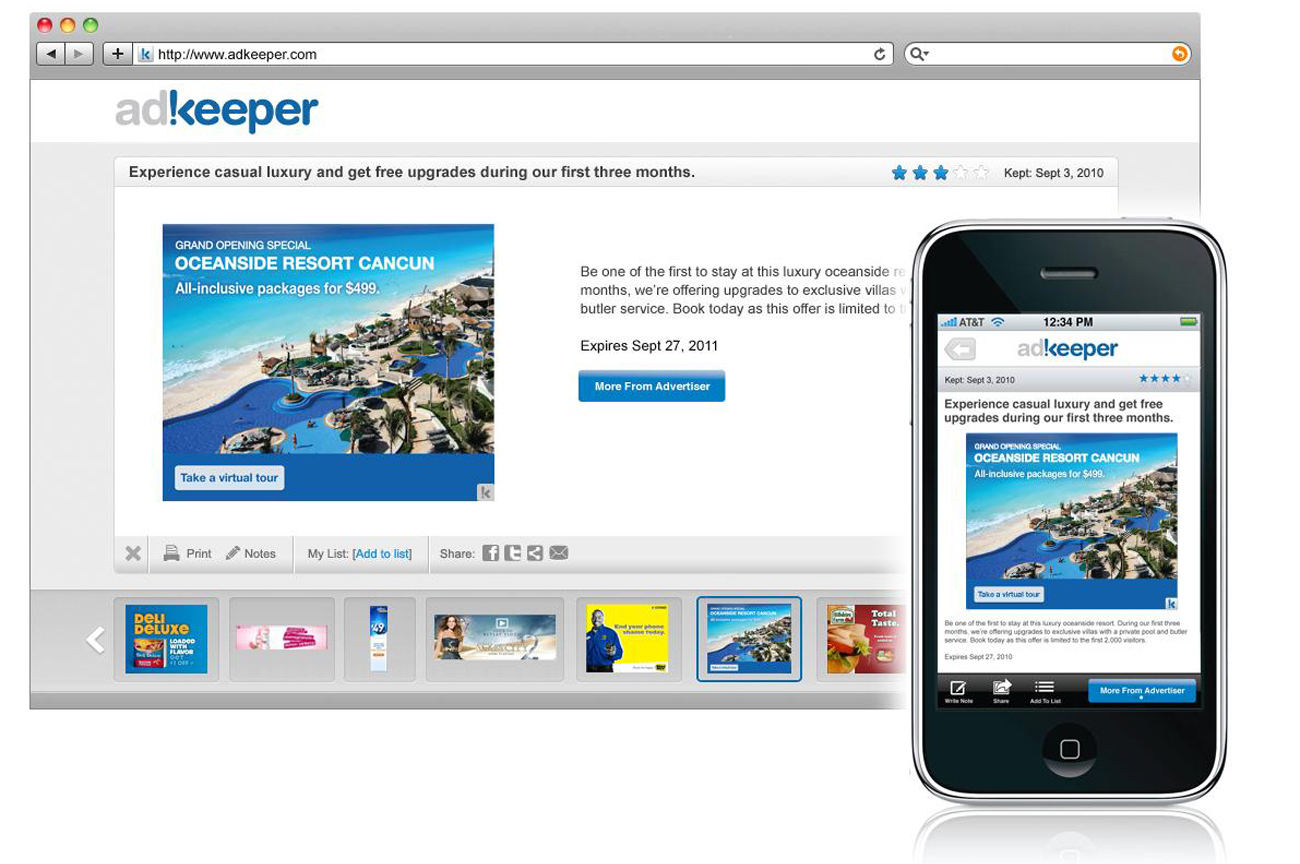 Imagine if advertising legend David Ogilvy was enlisted to help guide the people who created the Internet and the tools used to navigate it? The result may have been advertising technology that doesn’t grate consumers quite as much. Disruption advertising predominates online and it’s a sweet relief to find innovators like AdKeeper focus on trying to fix what’s broken. By MANDY DE WAAL.

Online advertising today is, for the most part, terribly annoying, with ads that scream to compete for consumer attention at all costs. Disruption works for the television industry because commercials break programming and consumers can adapt by walking to the fridge, going to the loo or switching channels. With the right frequency, enough people are exposed to TV ads and brand campaigns yield good results.

For some bizarre reason the interruption model used on TV was directly translated to the interwebs by the technologists and business people who built the underpinnings of the dynamic universe. The result is a frustrating experience of flashes, sounds, pop ups, distraction and other web noise that has spawned an industry of ad-filtering software. “The notion of trying to interrupt that process doesn’t seem logical to us and that’s exactly what advertising online today is trying to do, they are relying on interruption to get noticed,” says MaryAnn Bekkedahl, chief financial officer of AdKeeper.

AdKeeper hasn’t done away with interruption but it has given web users the option to engage with advertisers in their own time. More importantly it does so without taking users off course or breaking the navigational trajectory they’re on. “We think it is time to give consumers the option to engage with everything on the web they’re interested in and decide for themselves what they want to read now, and what they want to read later. It is a great opportunity to grab the things that might be of interest and engage with them in a time-shifted manner,” says Bekkedahl. A smart invention that enables you to keep adverts for later with a simple click, AdKeeper’s the brainchild of Scott Kurnit, the man who founded About.com and took the resource network to a public market valuation of about $1.7 billion. He also created the forerunner to Google’s AdSense, which was called Sprinks and bought by Google in 2003. Kurnit had been thinking about an ad fix for the web for a number of years based on the view that the way adverts are delivered online is illogical, given that web advertisers were trying to bring the interruptive model of TV advertising to a completely dynamic medium.

“It is interesting to us that there is a core difference in the way you can deal with online advertising and online content,” says Bekkedahl. “You can bookmark content and go back later to consume it, but you can’t keep the ads. If you use Instapaper to store content for later, the ads are not a part of that capture. What you get is your content, but the ads have escaped capture.”

For consumers, AdKeeper works like this: You’re reading an article and see a skyscraper or leader board advert with something you’re interested in. It will contain a small “k” button in one corner of the ad. When you mouse over the icon, the “k” will expand into an invitation asking whether you’d like to keep the advert. You then click on the message and get a confirmation that the ad has been kept for you to view at a later time. The confirmation includes a hyperlink which takes you to a personalised web folder at AdKeeper which becomes the repository for all your saved adverts. You get to sort and categorise adverts according to predefined lists and share adverts with friends via email or social media such as Facebook. Every ad that’s kept by consumers is visible in an online gallery so you can search for adverts, promotions and discounts not currently contained in your AdKeeper subsite.

The service is free to customers and advertisers get the first leg of the offering for free, because they don’t pay for ads consumers keep. Advertisers only start coughing up when consumers interact with the ads later. “AdKeeper will charge advertisers a CPM (cost per impression) and a CPC (cost per click) for ads that consumers engage with in the keeper,” says Bekkedahl. The keeper being the section where consumers keep and interact with their ads. “It is a fantastic business model for the advertiser because there is zero waste. Getting kept is a good thing because it really shows consumer intent or interest, but we are not charging for getting kept.”

Marketers will have an online dashboard with analytics tools to show brand-specific metrics, together with industry-sector results so marketers can benchmark their own results against those of the industry. The service will also show which publishers performed the best by virtue of how many ads are kept on various publishing networks.

Watch Scott Kurnit talking about the inspiration for AdKeeper:

The service goes live on 14 February this year, but recent consumer testing showed that, of 1,600 people polled, the service scored a 56% intention to use rating. Bekkedahl says more than 100 of the US’s top advertisers have signed up with the service because it is respectful of consumers and how they want to use the web. AdKeeper plans to establish a strong presence in its home market in the US and grow into territories like China, South America, Europe and Africa.

“The business will scale very well and, if we attract consumers at the rate we are hoping for, all advertisers should commit to keeping ads. It becomes an interesting model where, if I am a brand and I traffic ads that are not ‘keepable’, but all other consumer brands in my category are, what kind of message am I sending to consumers? It is a negative message that speaks to ignoring consumers’ needs. The more consumers keep, the more advertisers will sign up because they will not want to be seen to be disrespecting consumers by not enabling them to keep ads. If we do everything right, it is likely we will get ubiquity with advertisers and investors alike.”

AdKeeper has just secured $35 million in a series B funding, which means investors like the advertising service very much. It’s interesting to note these investors include The New York Times.

This smart new advertising tool is a great fix that makes the web friendlier for users by enabling them to keep ads and engage with them whenever they want. Now, if only someone would do something about the rest of that disruptive advertising model that’s infecting the web, hurting online publishers and disrespecting readers. DM

Read more: AdKeeper: Our “Keep” Button for Ads Will Be “Bigger than Twitter” in The New York Observer, Is “Ad Keeping” the Next Frontier? in Forbes, AdKeeper Now Reveals Metrics Behind How Often Its Ads Are ‘Kept’ in TechCrunch, AdKeeper’s CEO on Why People Will Save Web Ads for Later in Advertising Age.