Ricky Gervais: Biting hard on the hand that feeds

Ricky Gervais: Biting hard on the hand that feeds 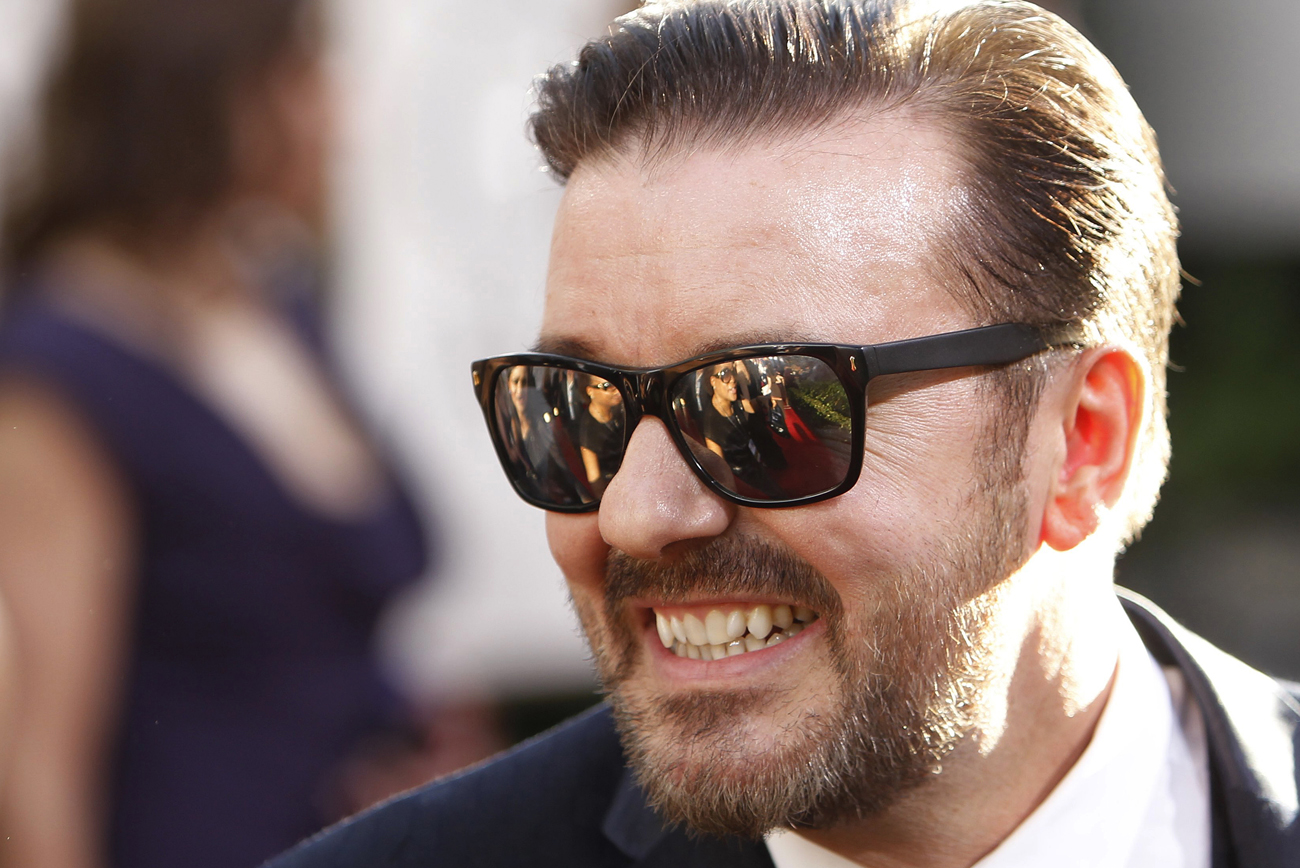 Seeing that the co-creator of The Office made his name by sending up the media and entertainment industries, is it any wonder that he did what he did at the Golden Globes on Sunday night? Clearly, the show’s producers were asking for it when they invited Ricky Gervais. By KEVIN BLOOM.

In February 2007, as part of his stand-up comedy show, Ricky Gervais decided to tell the audience about his experience in hotels when accommodated as a guest performer. The subject was what these hotels, every last one of them, offered as TV fare. “Twenty-two channels,” he said. “Except, I watched hours on end the History Channel and the Discovery Channel just back and forth, like six hours. Ask me anything about sharks and Nazis…” Sometimes, he continued, the hotels would offer only these two channels. He made as if he had a remote in his hand, flipping between them. “Sharks, Nazis. Sharks, Nazis.” Then he commented on his preferences. “Sharks, brilliant. Nazis, rubbish.” The clip quickly went viral, and aspects of it entered the contemporary culture lexicon. For instance, “Toyota Hilux, brilliant. Landrover, rubbish.” Gervais had done again what he’d started doing in 1998: showing us, hilariously, how media and entertainment influence the way we think.

The Office, the television series that made Gervais famous, was founded with just such an attitude. Stephen Merchant, Gervais’s long-time collaborator, was required to make his own short film while on a BBC production course, and he chose to create a parody of the docu-soap genre. There have been claims (primarily from the editor of this website) that The Office was inspired by Ken Finkelman’s Newsroom, but where that show – about a producer in Toronto who’s a philanderer and opportunist – was relegated to the black hole of PBS reruns, Merchant and Gervais went global. Less than ten years after the pilot episode aired in the UK, the show had been remade for audiences in France, Germany, Quebec, Brazil and the United States. A Chinese version is currently being mooted.

Which means that Gervais has every reason in the world to rip off the entertainment industry, no matter who or what the target. On the night of 16 January, as host of the 68th Golden Globes Awards, before many of the most powerful men and women in Hollywood, the Berkshire-born comedian delivered what was arguably his most scathing critique yet. Some of the people in his sights were soft targets, as evidenced by the following remark: “Welcome to a night of partying and heavy drinking. Or as Charlie Sheen calls it: breakfast.” But some were practically unprecedented for sheer bravery and chutzpah: “I’d like to quash this ridiculous rumour going around that the only reason The Tourist was nominated was so that the HFPA could hang out with Johnny Depp and Angelina Jolie. That is rubbish. That is not the only reason. They also accepted bribes.” As a demonstration of quite how brave Gervais had been with that last statement, the president of the HFPA (the Hollywood Foreign Press Association, which not only organises the awards but represents 55 countries and a combined readership of 250 million) shot back: “Ricky, next time you want me to help you qualify your movies, go to another guy.”

The barbs didn’t end there. Bruce Willis was introduced as “Ashton Kutcher’s dad”, the cast of Sex and the City 2 got it in the neck twice (“I saw one of you in an episode of Bonanza!” and “Nothing for Sex and the City 2, I was sure the award for best special effects would go to the team that airbrushed that poster”) and John Travolta and Tom Cruise (presumably) were skillfully defamed: “Also not nominated, I Love You Phillip Morris, with Ewan McGregor and Jim Carrey, two heterosexual actors pretending to be gay – the complete opposite of some famous Scientologists then.”

The discomfort caused by Gervais was, apparently, palpable. After Robert Downey Jr. was introduced as someone better known for his stays “at the Betty Ford Clinic and the L.A. County Jail” than for his movie roles, the actor thought he’d better respond: “Aside from the fact that it’s been hugely mean-spirited with mildly sinister undertones, I’d say the show’s going pretty good so far, wouldn’t you?” Tom Hanks also contributed a word or two, delivered to Tim “The Toolguy” Allen: “We recall back when Ricky Gervais was a slightly chubby but very kind comedian,” said Hanks. “Neither of which he is now,” Allen replied.

Needless to say, Gervais was noticeably less vocal in the second half of the show than he’d been in the first. About two-thirds through, according to the Los Angeles Times, #freerickygervais had become a trending topic on Twitter, with countless tweets pondering whether the British upstart had been ordered to dial back by either the producers or the HFPA. On Monday the trending topic was crammed with links to a page on spoof site The Daily What – the site had affixed a picture of Gervais to the side of a milk carton, above the caption, “Have you seen this man?”

For his part, the co-creator of The Office was no doubt loving it all. As he once told his friends across the pond: “I’m from a little place called England… We used to run the world before you.” DM