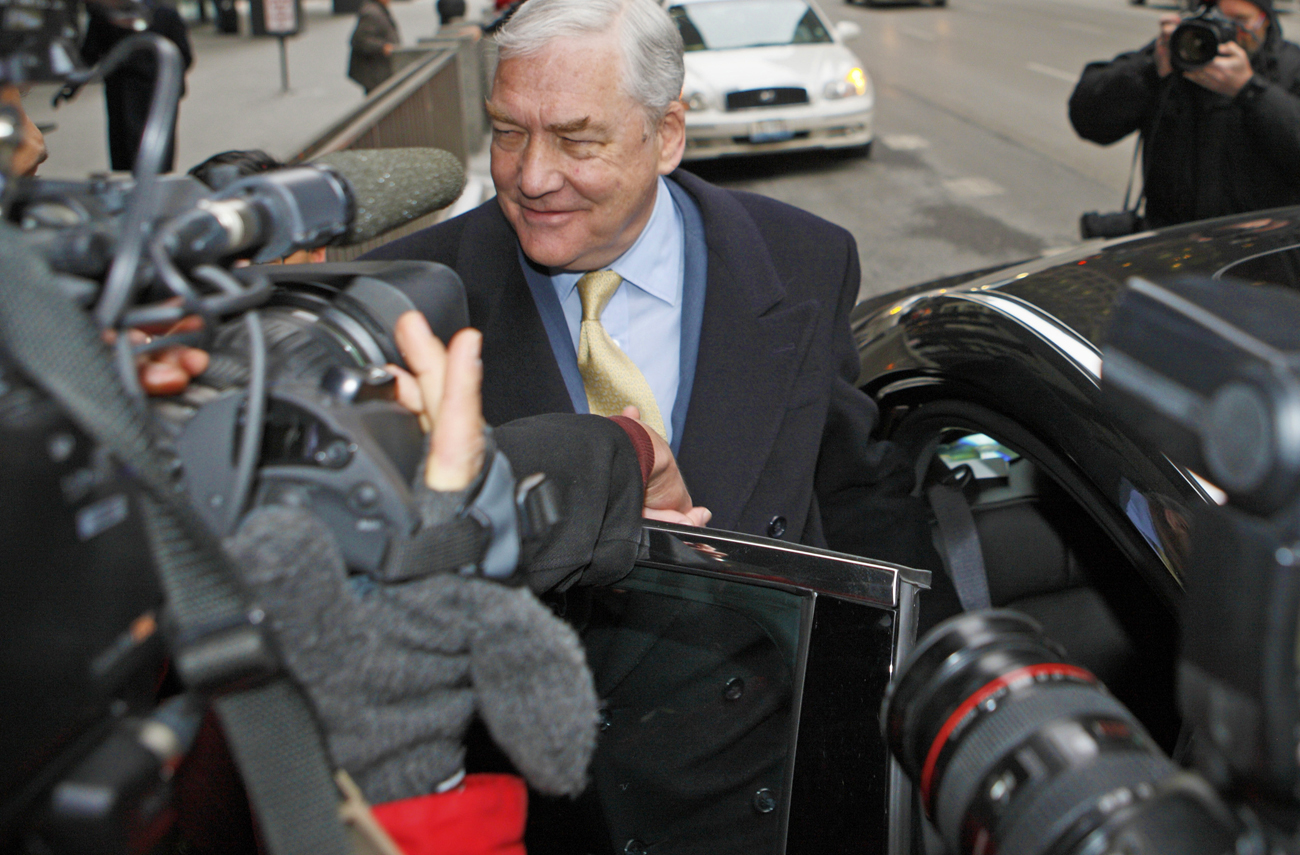 Conrad Black, everyone’s favourite dodgy media baron, has just dodged another legal bullet. After enjoying a short prison stint for a host of fraud charges, Baron Black of Crossharbour (no, that is not a Harry Potter character) has recoated himself in Teflon, and slinked free once more from Lady Justice’s grasp. And who, one wonders, is this Tweeting FakeConradBlack fellow? By RICHARD POPLAK.

Conrad Black does not Tweet. One hundred and forty characters constitutes a meaningless amount of literary real-estate for the one-time media lord, given his photographic memory, Brobdingnagian vocabulary and his penchant for writing 1,200-page historical volumes of major US political figures. There is, however, a Twitter handle called FakeConradBlack, and he’ll do for now.

A brief précis of the Black fiasco: Born in Canada, educated with the scions of Anglo upper-crust, Baron Black of Crossharbour rose to become the third-largest newspaper magnate in the world. A dilettante writer, historian and publisher, his Canadian citizenship was rescinded by his political enemies after he accepted a baronetcy, an event that suited him just fine at the time—the colonies, you see, were no place for a man of his ambition. Black, who owned the Chicago Sun Times, the Daily Telegraph and the Jerusalem Times, among others, lived large in the UK and the US—huge pads in New York, Florida, London, etc—and was spending it like he stole it. Indeed, said US investigators, he did steal it. He diverted millions from the publicly held Hollinger Corp. to fund his lavish lifestyle, and was thusly sentenced to 78 months of hard time in a Florida prison. Did he serve it all, you ask? How I giggle at thee!

After Baron Black’s release on bail last October, FakeConradBlack remarked, “And so, fondest farewells to Ron, Black Ron, T-Nasty, Magnus and, of course, Rooster Dick. You are all my brothers from unrelated mothers.” He implied that the transition to normal life would not be without its difficulties. “Before leaving for a stroll, I just attempted to shove a roll of hundred dollar bills up my rectum. This will take some time adjusting.”

Black emerged with several axes to grind. Thoroughly underestimating his resilience and his skills as a legal autodidact (if you think Black left his defence up to his considerable legal team, then you misunderstand the term “micro-management”), most of his ex-peers in the international press wrote him off. Nowhere more so than in his home country of Canada. The Canadian press—which Black considers to be hopelessly parochial, small-minded and left-wing—were vicious, except for the loyal standouts still thwacking away at the paper he founded, the financially troubled National Post, and its conservative satellites. (Full disclosure: I write for the National Post.)

Penned FakeConradBlack, in a fit of reverse schadenfreude, “I mustn’t squander my precious time and freedom. Tomorrow I shall superglue a $100 bill to the sidewalk outside Walrus Magazine, for laughs.” Canadians chuckled because The Walrus, the country’s unabashedly literary, stolidly lefty answer to The New Yorker, is the antithesis of the National Post and everything Black stands for intellectually and politically. (Full disclosure: I write for The Walrus. This is why freelance scribes are so often compared to prostitutes.) A qualifying Tweet shortly followed: “Which is to say, I will have someone do so on my behalf. Because I cannot leave the USA. That would be a crime. And I obey the law, you see.”

In another fake dig, FakeConrad wrote of the Winnipeg-based Lenny Asper, who purchased the National Post, promptly ran it into the ground and sold it for a song, “In his most recent letter, Asper sarcastically inquired about the quality of the lobster here. Truthfully? It is sub-par at best.”

But enough with the inside baseball. Yesterday Black, who now bides his time in a sprawling mansion in Palm Springs, Florida, with ex-celebrity journo and gal-about-town Barbara Amiel, was back in a Florida courtroom, facing off against the tiny Judge Amy St. Eve. At issue were two non-compete payments made to him after he sold a small California paper for a dollar, and was bequeathed, along with another executive, 2.6 million bucks in order not to open another tiny California paper. Those millions were not shared with the stakeholders in Hollinger, Black’s publicly traded media company—Black was surprised to learn that this constitutes fraud in the United States.

None of this means that Black is off the hook. He still faces an obstruction of justice charge, stemming from a caper he pulled with a secretary and a chauffeur—liberating 13 cardboard boxes stuffed with information from the Hollinger offices, while neglecting to disable the security cameras that filmed them doing so. There is also another non-compete charge on the books. Unhappily, Black may yet spend some more time with his brothers from unrelated mothers. As FakeConrad puts it: “They can find water on the moon, but Courvoisier in central Florida? Too much to ask for, apparently.” DM

Photo: Conrad Black leaves the Federal Courthouse in Chicago after a status hearing, January 13, 2011. Black and fellow executives at Hollinger International Inc were convicted in July 2007 of defrauding the Chicago-based newspaper publisher when they paid themselves non-compete fees as they sold off parts of the company. Black was freed on bail in July 2010 after spending nearly 2-1/2 years of his 6-1/2-year sentence in a Florida prison, pending the outcome of his appeal. REUTERS/John Gress.