The Archbishop and the Zionists – a comic tragedy in one act 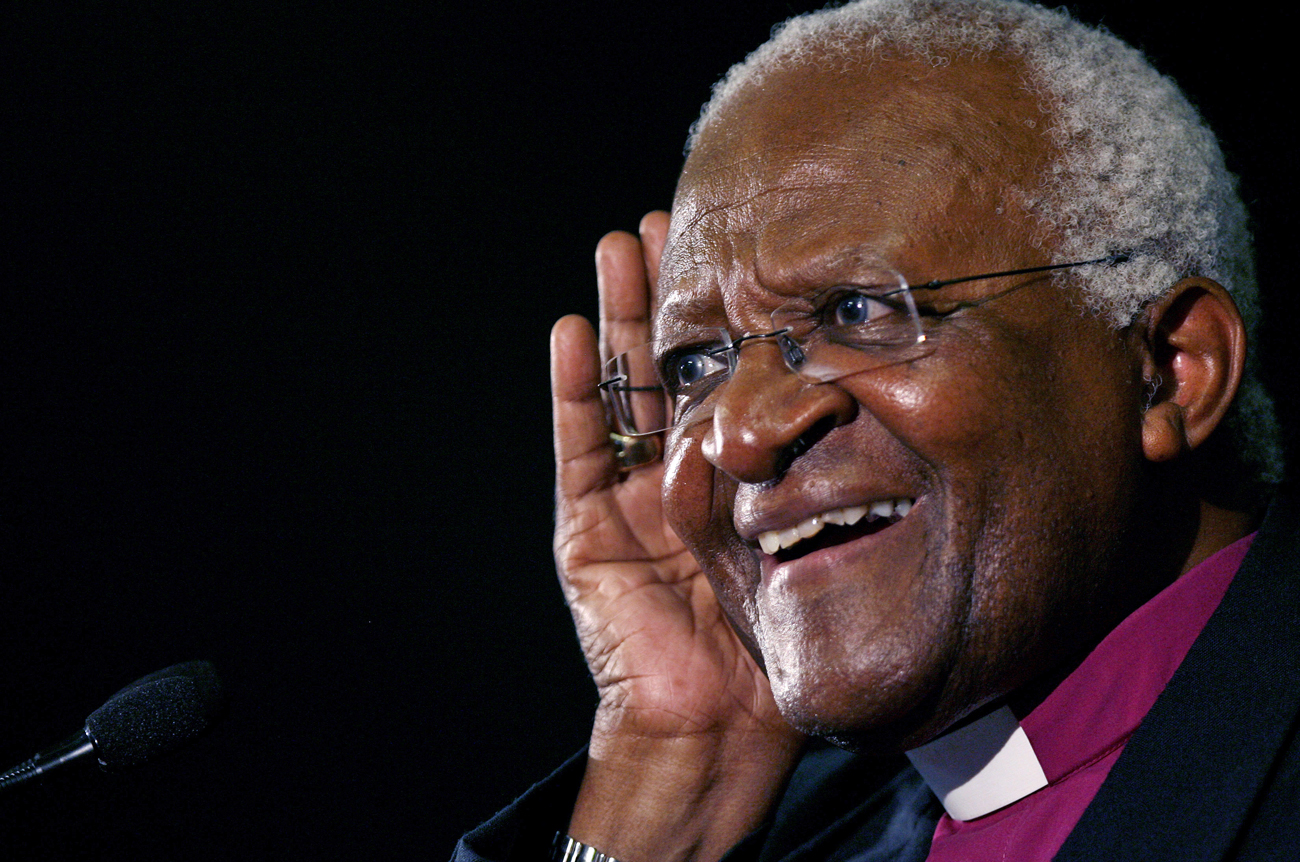 This week, a petition demanding the removal of Archbishop Emeritus Desmond Tutu as patron of the South African Holocaust Federation, over his long history of anti-Israel comments, has hit the news. Once again, we learn that playing Holocaust politics is a dangerous game, and that there are never any winners. By RICHARD POPLAK.

Three hundred and sixty-one signatures. That’s all it takes to ignite another depressing conflagration in the epic, proud, compromised history of South African Judaism. Last year, the Jewish Board of Deputies and their supporters managed to place the South African Jewish community on the front page of international newspapers by threatening to bar Judge Richard Goldstone, whose Goldstone Report was highly critical of Israel’s 2008 invasion of Gaza, from his grandson’s Bar Mitzvah. Now, David Hersch, the vice-chairman of the South African Zionist Federation, and several of his peers, have drafted a petition insisting on the removal of Archbishop Tutu as patron of two holocaust centres, one in Johannesburg, the other in Cape Town, for “numerous anti-Semitic and anti-Israel comments,” and his long record of “demonising Israel.”

First, a word on the good Archbishop, and his position on the Israeli-Palestinian conflict. Following a visit to the region in 2002, he gave an address to the Ending the Oppression conference in Boston, drawing a stark analogy between Israeli policies and South Africa during apartheid. Crossing into Israel from the West Bank, he witnessed “the humiliation of the Palestinians at checkpoints and roadblocks, suffering like us when young white police officers prevented us from moving about.” Israel, he insisted, “will never get true security through oppressing other people.” He critisised the all-powerful Israel lobby in America, and assured his audience that he wasn’t anti-Semitic. In fact, said the Archbishop, “I am not even anti-white, despite the madness of that group.”

In keeping with Godwin’s Law, the defining principle of post-modern discourse, Hitler made it into the speech, as did Stalin, Pinochet, Milosovic and Africa’s own Idi Amin. “In the end,” said the Archbishop, “they bit the dust.” Implication: So too will the evil Israeli Occupation. “Have our Jewish sisters and brothers forgotten their humiliation?” asked he. “Have they forgotten the collective punishment, the home demolitions, in their own history so soon?”

“Have they turned their backs on their proud and noble religious traditions?”

In that same speech, rhetorical curlicues notwithstanding, the Archbishop laid out his simple vision for the future of the region: A withdrawal from the occupied territories, and a two-state solution with guaranteed and secure borders for both nations. This puts him in step with just about every sane observer of the region—hawk, dove or some other avian species in between. More recently, the Archbishop has condemned the Israeli commando attack on the Turkish flotilla, begged the Cape Town Opera Company not to play Israel until the Palestinians can also enjoy Verdi, supported a boycott of Israeli universities, and generally stayed on message. He does not like the situation in Israel, and won’t shut up until it changes.

Unsurprisingly, this has left the Archbishop somewhat aloof from others in the SA Holocaust Federation. Which brings us to the petition, launched by David Hersch, who vice-chairs the SA Zionist Federation (SAZF). The SAZFs mandate is as simple as it is unsubtle, and stands as an utter inversion of the Archbishop’s views—uncritical and unbending support for the State of Israel, regardless of the circumstances. In this, the Archbishop is a piñata that must be thwacked until—well, what exactly? Tutu’s stance, according to the petition’s text, is “morally repugnant,” and represents a “horrific and grotesquely false accusation against the Jewish people.” To keep the Archbishop on board would mean that the trustees are “cowardly” and “politically correct.” In order to maintain the integrity of the SA Holocaust Federation, the Archbishop must go.

In a neat little dance of political distancing, SAZF vice-chairman Hersch has co-drafted the petition, and not the group’s chairman, Avrom Krengel. Mr. Krengel enjoys a vastly more panoramic view of South African Jewish landscape than the petition suggests; he’s signed it, but is apparently not one of its architects. In a riposte to a letter sent by American Zionist nutbag Caroline Glick, who condemned the South African Jewish community for staying in South Africa, and for putting up with the daily, virulent anti-Semitism that South African Jews were surprised to learn they put up with, Krengel wrote, “we are a community that is not afraid to debate what it means to be a Zionist in the 21st century and hear the views of members…who while intending to live in Israel and supporting Israel’s right to exist as a Jewish Democratic State, [are] highly critical of certain policies of the Israeli government. We make no apologies for our tolerance and diversity.” But the group’s stridency—and its incidental relationship to the petition—belies its willingness to tolerate diversity, unless it comes politely from within.

A petition is to a debate what a TV dinner is to gourmet cuisine. And where there is a petition, there must be a counter petition. In this case, signees such as Annie Lennox, along with former head of the Constitutional Court Arthur Chaskalson and 1600 (and counting) other like-minded souls, legitimise the first petition by insisting that the SA Holocaust Federation—an institution with which Annie Lennox is no doubt intimately familiar—remain a beacon to “human rights and democracy.” “The holocaust belongs to all of humanity,” continues the (counter) petition, and the Archbishop “represents the finest tradition of resistance to all forms of oppression. To call him an anti-Semite because he has attacked the policies of the Israeli government, is outrageous, renders the term meaningless, and enfeebles the necessary efforts to defeat real anti-Semites and racists.” If you’re bored, it’s because you’ve heard these arguments before. It’s the same game of rhetorical ping-pong, played on both sides of the table with ritualistic fervour, endlessly.

Amazingly, some South Africans tend to underestimate the esteem in which anti-apartheid Nobel laureates are held in the international community. The Archbishop, however, has repeatedly made one intellectual blunder. The mistake at the heart of his argument—and one that he must be called on—is a doozy: He suggests his “Jewish brothers and sisters”—which is to say: Jews as a bloc—are unequivocally and uncritically supportive of the State of Israel, and somehow collectively stained by that country’s ignominies. Without drawing a firm line between Judaism and Zionism, the Archbishop wanders into murky territory. Historically, Jews have never thought in step with one another—it’s a hallmark of our “proud and noble religious tradition.” The Archbishop dispenses his deep wellspring of forgiveness in bulk—to this group, and “that group.” To get a piece the Archbishop’s benevolence, you need to sign up to an ethnic or religious cohort.

Which is, of course, what makes groups like the SAZF so upsetting. They advocate, Krengel’s protestations aside, for a united Jewish front on the very issues we should be furiously debating. One of the abiding tragedies of the Holocaust is that it profoundly damaged the atavistic fabric of Jewish thinking and spirituality. Having survived the slaughter of six million kinsfolk, we tend to ignore one of the more important precepts of survival—to mend and revive broken traditions, and to live by ancient codes. And one of our more important codes—reasoned argument—is written into the DNA of modern democracies. The SA Holocaust Federation should be able to absorb disagreement on everything but the historical validity of the holocaust. To accept the vibrancy of differing intellectual and political opinions is to deny to the very thinking that led to the Shoah in the first place. So long as we agree to disagree, we are safe.

There’s something else as well: Israel’s formulation was in a large part motivated by the holocaust, but the holocaust doesn’t indemnify its behaviour on every count. To link one’s spiritual identity to the ice-cold pragmatism of a nation state is misunderstand the point of being a reasoned human being. It’s to hand over the Jewish continuum to a bunch of politicians and generals—men and women who live by a different code. And by linking the regional conflict to a local Holocaust Federation sells both the conflict and the holocaust way short. The Archbishop will likely remain a patron of the Holocaust Federation; his opponents will look like fools.

The only thing that suffers is reasoned debate. Again. DM

Photo: Archbishop Desmond Tutu gestures at the launch of a human rights campaign marking the 60th anniversary of the signing of the Universal Declaration of Human Rights , December 10, 2007. REUTERS/Mike Hutchings.