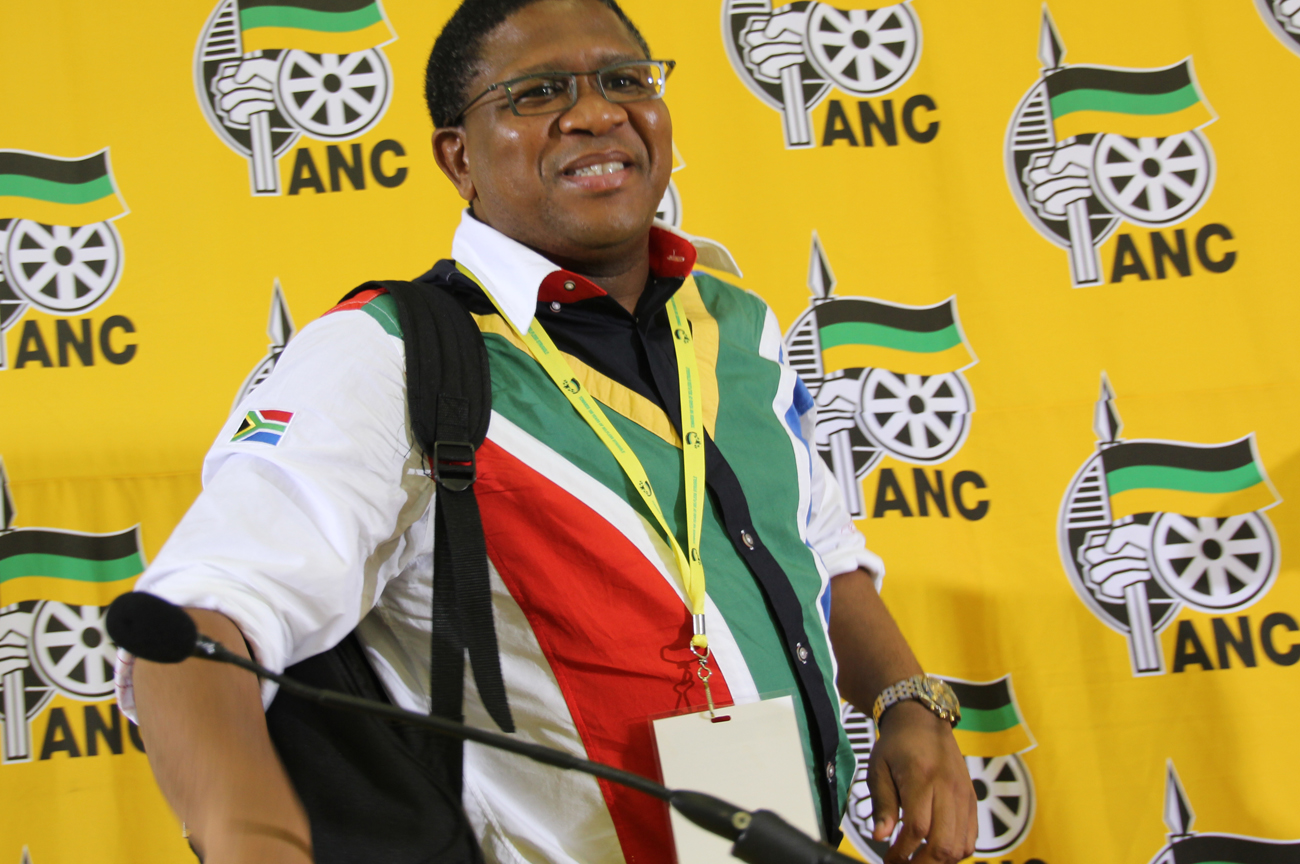 Of all the people who have a lot to lose in 2011, Fikile Mbalula probably heads the list. He’s the one person who so far has stuck his neck out against the current ANC top six. The one guy with the mouth and the sheer political balls to go up against the increasingly powerful Gwede Mantashe. Which is one of the reasons why he’s playing such a canny game as minister of sport. By STEPHEN GROOTES.

Mbalula’s first press appearance out of the starting blocks saw him immediately realise his real new job was actually to be cheerleader-in-chief for Team SA. When he first spotted a microphone after being sworn in as minister, he went for it, “SA must be a winning nation” he said. It was at the Presidential Guest House, the Chief Justice was still in his robes, but Mbalula, who most of the times has a very cunning political brain, grasped immediately what he had to do.

This week he’s been at it again. It’s a mark of the differences between the Mbeki administration and the Zuma government when it comes to race that our current sports minister can publicly say, again and again, that “there’s no place for quotas in our sport”. This during the same week Makhaya Ntini officially retired.

This could turn out to be a defining moment in our society. You don’t have to be a sports fan to remember the racial schism the whole quota argument created. It was one of those issues that flooded talk radio and kept letters editors in good copy for literally years. And stunningly, even though the actual number of black players in our national rugby team hasn’t improved dramatically, there’s been a huge reversal from the top. Part of this has to do with the change from Mbeki to Zuma, and the generational shift (and I mean by age, cabinet’s average age dropped by 20 years when the Mbeki crowd left) in our cabinet as a result.

But part of it is also because our formerly white codes are winning, while football is not. And Mbalula knows he needs to hitch himself to a winning argument and a winning side. The thing about Mbalula, is that he is born to play the role of cheerleader-in-chief. He has the mouth, the ability to think on his feet, and, crucially, despite what some people may tell you, he gets it on race. It makes him perfect for the role.

We have a recurring fantasy where he goes to New Zealand with the Boks, and spends the early part of the tournament stirring merry political havoc with the other teams. He could ask Maoris why they play for the All Blacks, why do they have a “Maoris” team anyway, and then ask the white Kiwis why they have a distinction. The English can be slammed as colonialists, the French as in the same league, and just don’t get him started on the Aussies and all the Aboriginal issues. It would be wonderful political fun, and would get them on the back foot. And let’s face it, there’s no way any Kiwi, Aussie or Brit would have a mouth to match Mbalula’s.

While that’s probably not going to happen (a bit like your economic plan from Wednesday – Ed), we do think Mbalula will be the first on the field when the full-time whistle blows to hug the Boks all through the tournament. It will be the final antidote to the nastiness of the Makhenkhesi Stofile era. Hell, he may even find a way to eclipse Butana Khompela.

But the real political motivation behind it will be that he will be attached to a winning brand. Even in the ANC nowadays, rugby matters and winning more so. But that’s nothing compared to the political kudos for successfully managing what the party dearly hopes will be a moment of racial cohesion not seen since the last World Cup we hosted. The ANC sees sport, and successful national teams, as a major force for good in our society.

Mbalula may also need to find a way to make sure he thinks before he speaks. We remember well how he denied claiming that the University of KZN “is like something out of Bombay”, only to be confronted with the audio evidence. But recent events, including how he was forced to answer questions about his political ambitions at last year’s ANC national general council may have slowed him down a bit.

It’s funny, during Stofile’s time at the sports ministry, you didn’t hear from him between World Cups, or even during World Cups. He didn’t even publicly congratulate the Boks on their 2007 win. Yes, really. But with Mbalula, with two World Cups (cricket being the other) it’s going to be a big year for him. He needs to seize the opportunity, put last year behind him and show he has the nous to manage what can be a politically difficult portfolio.

If he pulls it off, he may just stand a chance of rehabilitating himself in the eyes of those he’s spent annoying the last few years. DM

Photo: Fikile Mbalula at the ANC NGC in Durban, September 2010. The Daily Maverick.