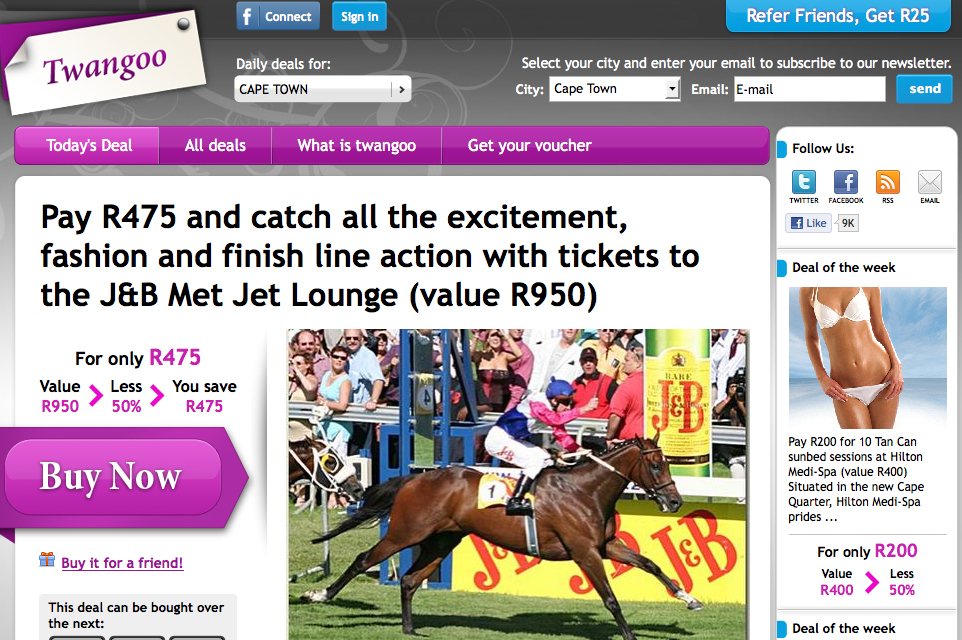 After rebuffing takeover bids from Yahoo and Google, the “collective-buying” company Groupon is expanding internationally by buying up local rivals. The recent takeovers were in India, Israel and South Africa. We chatted to Daniel Guasco, one of the founders of Twangoo, the local company Groupon has acquired, about the takeover and what it means. By SIPHO HLONGWANE.

While the details of the transaction are still to be announced, Twangoo will change its name and branding to become Groupon South Africa in the coming months. According to Guasco, he and his partner will continue to be involved in the business for another three years.

Groupon was founded in Chicago in 2008 on the simplest of simple ideas: collective buying power. The company distributes a daily email featuring discount coupons from participating merchants within a small area such as a city. The coupons expire fairly quickly and are unlocked only if a certain number of people respond. Groupon (“group” plus “coupon”) takes a cut, and the merchant gets the exposure. The result has been 44 million subscribers across the globe, 500 markets in 30 countries, projected revenue of $500 million and an initial $1.75 billion market valuation. According to Forbes, as reported in the Wall Street Journal, it is projected to make $1 billion in sales faster than any other business, ever.

The company’s meteoric rise could not have gone unnoticed, and in October 2010 it reportedly rejected a $3 billion buyout offer from Yahoo. The analysts and pundits had barely enough time to debate the wisdom of such a weighty valuation for a company based on such a simple business model when it was announced in November 2010 that Google had offered to buy Groupon for $5.3 billion. The company rebuffed that offer too, and announced a few weeks later it had completed a successful $950 million funding injection, based on a $6.4 billion valuation. Groupon investors included Yuri Milner’s Digital Sky Technologies (he of Facebook-investing fame), and followed a $135 million investment from DST.

The new investment has equipped Groupon to expand even more aggressively abroad, having already established a presence in Europe and parts of Asia, this time in India, Israel and South Africa, by swallowing up local players. Local collective-buying company Twangoo was inspired by Groupon, according to co-founder Guasco. It operates on the same principles, offering discounts and deals to subscribers in Bloemfontein, Cape Town, Durban, East London, Johannesburg, Pietermaritzburg, Port Elizabeth and Pretoria.

Guasco credited the success of the business to its execution. Groupon agrees, praising Twangoo’s success in a statement. Despite the easy-to-replicate business model, Guasco anticipates staying ahead of any potential rivals. “We are heavily invested in online advertising, and we’re rapidly growing our team from an execution perspective,” he said. “No other competitor can compete with the level of execution and the big backing that we now have.”

Groupon conceded the e-commerce market in South Africa was still tiny, but expressed confidence in the potential for growth. “Collective buying is in its infancy in India, Israel and South Africa and we see strong potential,” said Rob Solomon, president and chief operating officer of Groupon. “Groupon is shaping the way local merchants market themselves in every corner of the world.”

The company’s model finally makes it sensible for smaller businesses to invest in online advertising, which attracts local customers. Google’s Adwords service has proved to be too-large a net and too expensive for smaller businesses, and Google knows it. Their interest in Groupon was inspired partly by a desire to capture the elusive small-business ad market. To what extent their expansion into South Africa will invigorate local e-commerce remains to be seen. DM