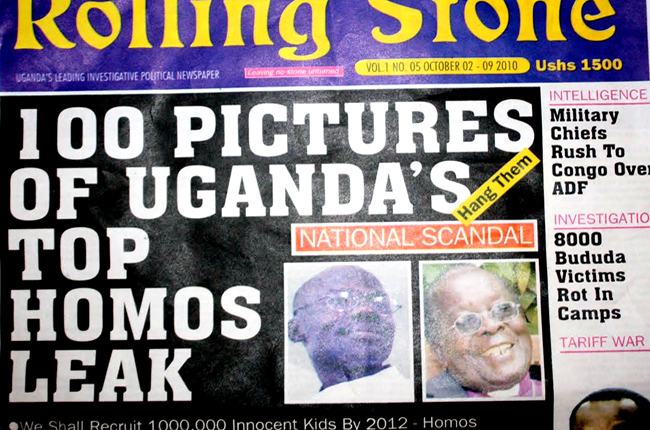 Ugandan tabloid Rolling Stone has been put in its place at last, with the Uganda high court ruling on Monday that it stop outing homosexuals. Oh, and the newspaper also has to pay the three applicants’ damages. Nonetheless, it is still an uphill battle for LGBT rights in Uganda, with the threat of the proposed Anti-Homosexuality Bill looming. By THERESA MALLINSON.

Last year wasn’t a good one for homosexuals in Uganda. Although the 2009 Anti-Homosexuality Bill was stalled in parliament, it wasn’t scrapped altogether and still has the potential to be debated this year. And in October 2010, Gile Muhame’s fledging newspaper Rolling Stone (no connection to the real Rolling Stone, the brilliant one by Jann Wenner) began its homophobic campaign of outing alleged homosexuals by publishing their photographs and home addresses, as well as calling for them to be hanged.

But things are looking a little bit better in 2011. On Monday the Uganda high court in Kampala ruled in favour of the three applicants in the case of Kasha Jacqueline, Pepe Onziema, and David Kato vs Giles Muhame and Rolling Stone. The applicants asked that they be granted a permanent injunction against the respondents publishing injurious information against them and that they receive compensation for the pain and mental anguished caused.

In his ruling, Judge Vincent Musoke-Kibuuku stated the court found, “The impugned publication threatened the rights of the applicants to respect (of) human dignity and protection from inhuman treatment and the right to privacy of person and home. Court would, upon that account, issue the injunction sought by the applicants under the motion, restraining the respondents, their servants and agents, from any further publications of the identities of the persons and homes of the applicants and homosexuals generally.”

In addition, the three applicants were awarded 1.5 million Ugandan shillings each (about R4,200 each) in compensation, and were ordered to recover their costs from the respondents. Whether they’ll be able to achieve the latter is another story. In a press statement on Monday, Rolling Stone managing editor Giles Muhame stated: “We would have paid them, but doing so is as good as ‘paying a tribute’ to those who promote sexual identity confusion and related madness”, thereby implying that he has no intention of paying the compensation, never mind the applicants’ legal costs. But as Frank Mugisha, the executive director of advocacy group Sexual Minorities Uganda (Smug), says: “It is a court order and if he, Muhume, and Rolling Stone disobey it they will be going against the law and they will be charged for that.” In terms of due legal process, Muhame, speaking to The Independent (the Ugandan magazine, not the UK newspaper), indicated Rolling Stone’s lawyers would lodge an appeal against the ruling.

Be that as it may, for now Uganda’s LGBT (lesbian, gay, bisexual and transgender) community has something to celebrate. “Gug”, the anonymous author of the Gay Uganda blog, said the word “ecstatic” summed up his reaction to the ruling. “What was under question is very simple. But it is profound in a way. We stood up. We said enough was enough. And we asked the courts to rule for us as Ugandans. That we have rights under the law and constitution as Ugandans. And that these rights that are common to all of us are being routinely trampled upon. I am ecstatic. We stood up, we fought and we won. That in itself is very good.”

Mugisha says: “Smug would like to thank the Ugandan judicial system for being independent and upholding the constitution of Uganda in protection of sexual minorities. We are happy the judge ruled in our favour. It was a stressful process for us at Smug and my colleagues [with] the plaintiff endlessly going to court and even exposing themselves to more danger in such a homophobic country. Of course, we have to celebrate every victory achieved… The Uganda LGBT community is excited; the three respondents feel a lot of weight and fear of the outcome has been lifted off them.”

Julius Kaggwa, executive director of SIPD, a Ugandan group that campaigns for intersex rights, is equally delighted with the court ruling. “As SIPD and part of the Civil Society Coalition on Human Rights and Constitutional Law, we are overjoyed about the ruling. For one, because it encourages us that there is still some room for us to engage and argue around our constitution for the human rights of minorities, especially sexual minorities. I have been personally heavily involved in campaigning against the Anti-Homosexuality Bill and a ruling such as this, which upholds the right to privacy despite one’s sexual orientation, is a great encouragement to keep talking and hoping for change.”

And there is still much scope for change. As it stands, homosexuality is illegal in Uganda, with prescribed prison sentences of up to 14 years. The Anti-Homosexuality Bill, tabled by MP David Bahati in October 2009, initially sought to impose the death penalty on multiple offenders, although this has since been revised to life imprisonment. A commission in May 2010 advised that the bill be dropped, but this has not yet happened, and it is widely thought the bill will be debated in parliament after the February 2011 elections.

The draconian nature of the proposed bill is only the legal manifestation of a reality that homosexual Ugandans have to live with every day. “We have to stay hidden. We have to look on as people incite hatred and lie about us. We have no HIV prevention programmes for gay men. We are routinely discriminated against if we ever come out and mention that we are gay. We are constantly under the threat of arrest, and prosecution or plain old blackmail and extortion,” Gug says.

Kaggwa echoes his sentiments: “We still have a long way to go because much of the hostility and hatred and harassment against same sex orientations and other sexual and gender variances we are fighting looms large at community level and from religious pulpits. Hate messages continue to trickle down our society through these avenues… As a result, it is still impossible for LGBT people in Uganda to freely be who they are and develop meaningful lives. The fear for life continues.”

Rolling Stone is not the only Ugandan media organisation to have run a homophobic outing campaign, with the tabloids Onion (we don’t want to be repetitive, but it bears pointing out that this rag is no relation to the American satire website) and Red Pepper also having done so in the past. Thus Monday’s ruling is a landmark one, as it sends a clear message to all Ugandan media that such campaigns will not be tolerated. An advertorial in the New Vision newspaper, taken out by Uganda’s Civil Society Coalition on Human Rights and Law, states that: “…the ruling provides an important precedent should any other media attempt to publish similar information”.

The advertorial, which appeared on Tuesday, is supported by more than 21 civil society organisations. As well as Ugandan groups standing up for LGBT rights, the media coverage generated by Rolling Stone’s homophobic campaign, and the subsequent court case, has refocused the international community on the situation of homosexuals in Uganda, no doubt a consequence unintended by Muhame and his newspaper. While the Anti-Homosexuality Bill may very well come before parliament later this year, it’s no accident that its progress has been slowed – largely due to international pressure from governments, aid organisations and the media.

As Mugisha puts it: “More international publicity gives us more protection when people around the world know what is going on in Uganda.” And LGBT Ugandans still need this protection. Despite Monday’s victory, Mugisha’s focus remains on the many future goals Smug is working towards achieving. “There is enormous homophobia in Uganda. Now we need to do a lot of sensitation[sic] and awareness. We need to lobby more human rights organisations; we need to support LGBT people who are harassed and imprisoned daily.”

As well as setting an important constitutional precedent, one of the outcomes of the ruling against Rolling Stone is that it has given Uganda’s gay community cause for hope. “Yes, the battle against Rolling Stone is a skirmish, but we are optimistic about even winning more battles,” Mugisha says. “Things will change and get better for us in our motherland, Uganda.” DM