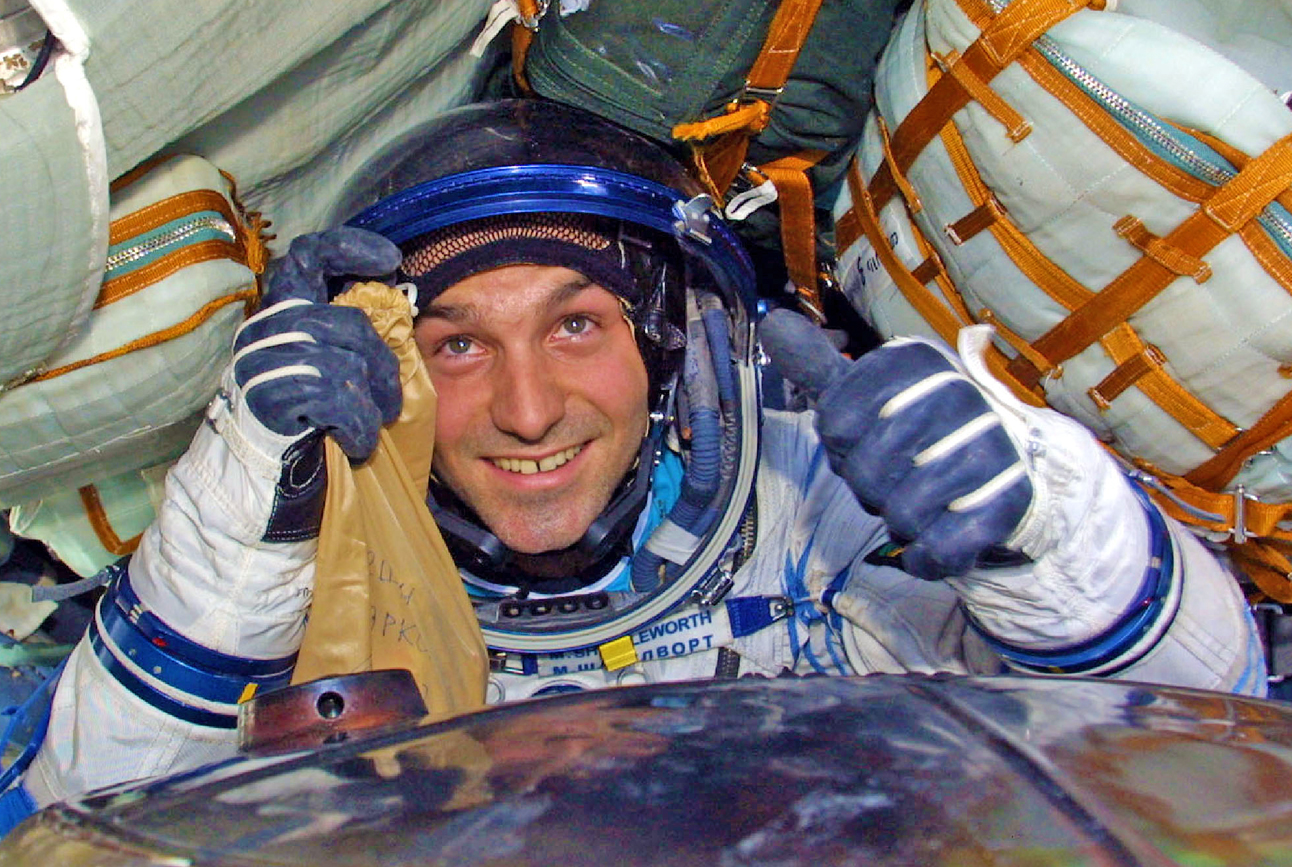 Africa's first man in the space may have been the big news around here, but the clouds of war in Afghanistan were still on the horizon when the world became aware that another, even bigger, war was being planned by the Bush administration. The year 2002 will one day be seen as a year-long clumsy dance in a prelude to a historical mistake.

While it was officially announced in 1995, the euro becomes a real EU currency only in 2002, replacing national ones in France, Spain, Germany, Italy, Portugal, Greece, Finland, Luxembourg, Belgium, Austria, Ireland and the Netherlands, with four more (Slovenia, Malta, Cyprus and Slovakia) joining much later (2007-09). On 1 January 2011, Estonia will also join. Photo: City volunteers display specimen euro banknotes at a Paris street market 15 June 2001 as a prelude to familiarise the French public with the new currency. Stalls set up along the street accept francs for produce, but give change in specimen euros which could be exchanged at a central point further down the street. The euro officially comes into circulation on 1 January 2002. Reuters.

His kidnapping and subsequent murder ignite the media world. Pearl was on his way to what he thought was an interview in a downtown Karachi restaurant, only to be snatched by the Islamic terrorist group with the clumsy name of The National Movement for the Restoration of Pakistani Sovereignty. After their attempts to use Pearl as a bargaining chip to force the US to free all Islamic militants fail, Pearl is murdered on 1 February. The group’s leader, Ahmed Omar Saeed Sheikh, is sentenced to death in June 2002, but 9/11 mastermind, Khalid Sheikh Mohammed later claims he beheaded Pearl himself. Photo: Wall Street Journal reporter Daniel Pearl is pictured in this photo, one of two images included in an email message apparently from his kidnappers. The group sent emails to news organisations on 30 January 2002 threatening to kill him within 24 hours unless the US government released Pakistani prisoners held in the Afghan war. The emails, sent to the Wall Street Journal, CNN and The New York Times, among others, accused Pearl of being a spy for Israel and also warned other US journalists to leave Pakistan. REUTERS.

29 January: “Axis of evil” unleashed on an unsuspecting world.

What do you do if you’re suddenly dropped into the shoes of a “war president” and have to deliver a strong speech as the next State of the Union address? That is exactly the problem Bush’s speechwriters David Frum and Michael Gerson face in the run-up to the speech. They solve it in their typical style, by playing a bull in a china shop: Political pundits watch in disbelief as George W Bush calls Iraq, Iran and North Korea  an “axis of evil”. While sounding pretty sexy to his followers, the short-sightedness of the term becomes obvious when the US invades Iraq in 2003 and rendered a negotiated solution with Iran and North Korea nigh impossible. Photo: US President George W Bush speaks to a joint session of Congress at the Capitol Building in Washington 29 January 2002. REUTERS/Luke Frazza.

He was incorrectly called “an evil genius”, and perhaps more correctly “the butcher from the Balkans”. The truth was, Milosevic was a man hopelessly out of his depth, caught in the maelstrom of a disintegrating country that was Yugoslavia in the 1980s. His mistakes will be paid for by the Serbian nation for many decades to come. Photo: Former president Slobodan Milosevic sits defiantly in the courtroom on the second day of his trial at the International Criminal Tribunal for the former Yugoslavia at The Hague 13 February 2002. Milosevic enters the dock eager to reject prosecution charges he is a power-drunk opportunist who wreaked “mediaeval savagery and a calculated cruelty” on the Balkans.

19 February: Mars Odyssey starts thermal emission imaging of Mars. The craft finds large deposits of water on Mars on 26 May the same year. Photo: An artist’s drawing of the 2001 Mars Odyssey spacecraft, designed to determine the composition of Mars’ surface, to detect water and shallow buried ice, and to study the radiation environment. After 200 days of travel and more than 460 million kilometres logged, the 2001 Mars Odyssey spacecraft fires its main engine for the first and only time on 23 October 2001 and puts itself into orbit around Mars. Odyssey was launched on 7 April 2001 from Cape Canaveral Air Force Station, Florida.

For years, the US-backed warlord was locked in conflict with the USSR-backed government of José Eduardo dos Santos. Such is the cult of his invincibility that only after the pictures of his bullet-riddled body are widely published do the people of war-ravaged Angola finally accept the 68 year-old strongman is really dead. Photo: Angolan Unita rebel leader Jonas Savimbi is killed in a clash with government troops in Moxcia province on 22 February 2002. Angolan forces spokesman Aldemiro de Conceicao said Savimbi was killed “as a result of a clash that occurred with a column that he was a part of”. Savimbi is pictured at the Unita base camp in Jamba in this undated file picture. Reuters.

For years, she was a French-educated heiress to one of the oldest and richest families in Colombia. But her 1998 election to that country’s senate with one of the largest number of votes ever, catapulted her to national fame, which she used to campaign for the presidency in 2002 as the candidate of the Green Party. Although she is warned not to, she campaigns in areas controlled by a communist guerrilla movement, better known as Farc. Nobody is much surprised when she is snatched by the rebels and held captive for more than six years. Photo: Colombian presidential candidate Ingrid Betancourt talks to soldiers at Florencia Airport in this photo taken on 23 February 2002. The Farc seized Betancourt shortly after this photo was taken as the army moved in to reclaim the area.

Main photo for this story: South African space tourist Mark Shuttleworth shows the thumbs-up from inside the landing capsule after landing in the steppes near the Kazakh town of Arkalyk  on 5 May 2002. The international crew consisting of Russian cosmonaut Yuri Gidzenko, his Italian colleague Roberto Vittori and Shuttleworth safely lands after spending eight days aboard the International Space Station.

The world’s second space tourist happens to be our own billionaire of Thawte fame, Mark Shuttleworth. His eight-day flight costs him $20 million and a year of preparation. His historic flight captivates the imagination of the nation and, for a short while, Africa itself.

Photo: Mark Shuttleworth, the first African in space, and Russian cosmonaut Yuri Gidzenko wave as they are welcomed back to Cape Town during a parade through the city’s streets on 10 June 2002. Shuttleworth became the world’s second paying space visitor after Dennis Tito of the US.

Played for the first time in two countries, Japan and South Korea, Soccer World Cup is dominated by surprising and brave performances from Turkey, South Korea, US, Japan and Senegal. At the end, however, it is left to the usual suspects, Brazil and Germany, to duke it out in the finals. Thankfully, Ronaldo’s two goals ensure Brazil wins their fifth trophy. Photo: Brazil’s Ronaldo (C) holds up the World Cup while celebrating with teammates in the final match in Yokohama on 30 June 2002. Photo: UN Secretary-General Kofi Annan opens a conference in Rome on 15 June to establish an International Criminal Court, declaring the world owes it to millions of victims of genocide to create a bulwark against evil. As delegates from 156 nations begin political negotiations to realise the 50-year-old dream of a world court to try the perpetrators of the most horrendous crimes, Annan says the international community has a moral duty to deliver.

9 July: Organisation of African Unity is replaced by the African Union Photo: South African President Thabo Mbeki addresses African leaders and delegates at the launch of the African Union at the Absa Stadium in Durban on 9 July 2002. At least 40 of the continent’s 53 presidents and monarchs are in Durban to see the launch of the AU with Mbeki as chairman for its first year. (Reuters) 27 October: Former union leader, Luiz Inácio Lula da Silva is elected President of Brazil. And what a brilliant choice the Brazillian nation made. 2 October: The US Congress gives President Bush the power to use force against Iraq as he deems necessary, thereby handing him full war powers. Photo: Surrounded by members of Congress, President George W Bush signs the congressional resolution authorising the use of force against Iraq if needed, during a ceremony in the East Room of the White House on 16 October 2002. Congress earlier voted to give Bush the authorisation he sought to wage war if necessary to disarm Iraqi President Saddam Hussein of his suspected weapons of mass destruction. REUTERS/Kevin Lamarque.

International response to the US plans: Photo: Iraqi President Saddam Hussein is seen during a cabinet meeting in Baghdad on 14 November 2002. Weapons inspectors prepared  to return to Iraq after Baghdad accepted UN demands, and neighbouring states let out a sigh of relief in the hope the region might escape war.

But the relief is brief. The scene for war is set and there is no way back. DM