Dawn of sunshine journalism breaks as The New Age hits... 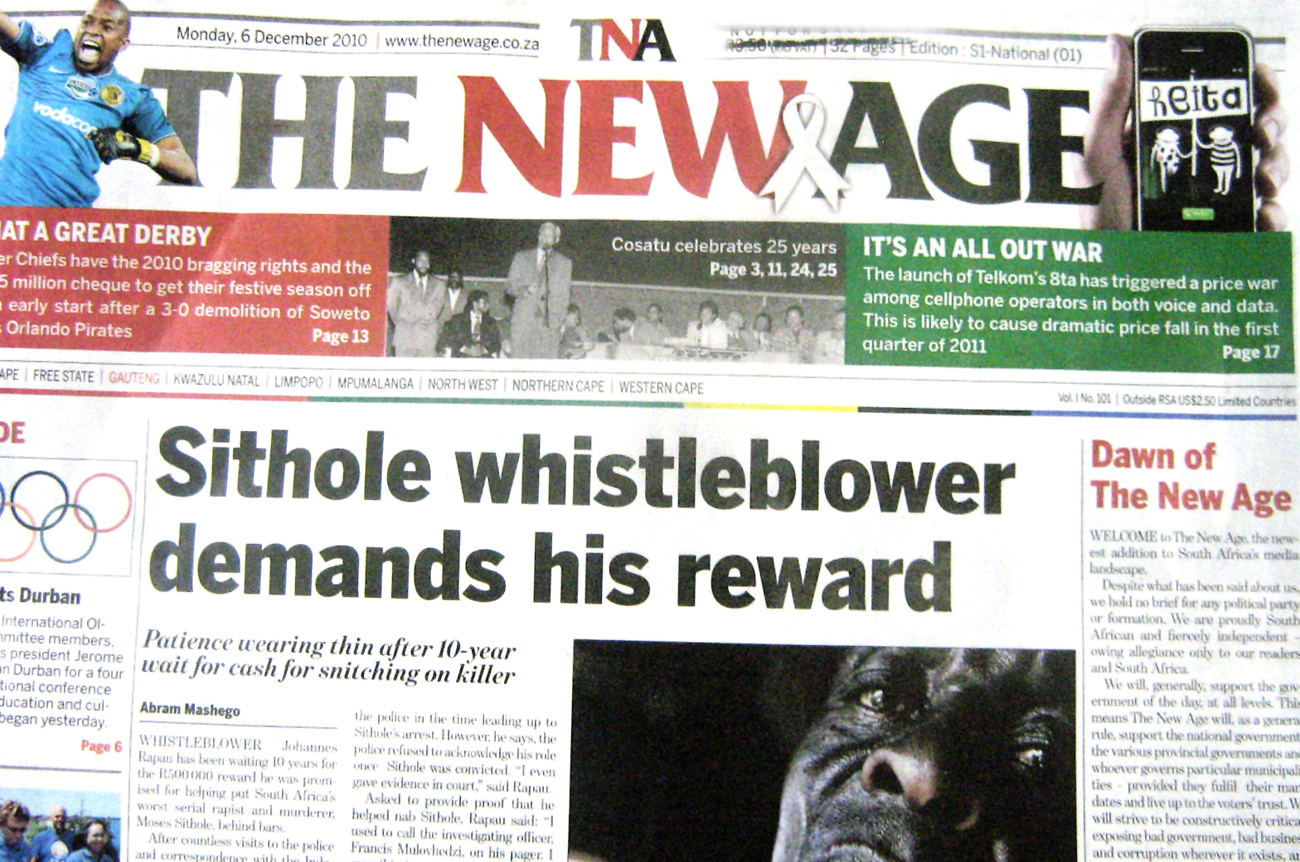 After two false starts, Atul Gupta-sponsored The New Age rolled off the presses with veteran editor Henry Jeffreys at the helm. His vision to capture readership by getting journalists to step away from their desks, to get off their phones and into the field in all nine provinces is admirable. But this is not where The New Age will be tested. By MANDY DE WAAL.

Henry Jeffreys’ crusade to banish arm-chair analysis and telephone journalism at The New Age could prove to be a strong differentiator for the newspaper in a resource-strapped news gathering environment in South Africa. A tough press market has seen an over-reliance on wire copy and journalists becoming more desk-bound, rather than going further into the field.

“Newspapers operate in a difficult market and resources have been dwindling over time with newsrooms becoming a lot smaller,” says Jeffreys. “There was a time when newspapers had bureaus all over the place. Over time these have been pulled back, journalists are clustered at their desks. A lot of telephone journalism is taking place as opposed to people getting in a car and driving out to a place to see for themselves.”

The New Age enters the market amid fierce criticism that is a pro-ANC mouthpiece because of the Gupta family’s strong relationship with Jacob Zuma, and business dealings with the Zuma family. There were accusations that the newspaper would be buoyed by government advertising and as this played out, Atul Gupta and his businesses continued to make headlines. There was the drama around Atul Gupta’s arrest; the controversy that surrounded the building of a helipad at the Gupta family compound in Saxonwold; and media stories of a Gupta-owned helicopter illegally landing at Zoo Lake. This was compounded by the unfortunate story of a sexual harassment case at the Gupta-owned Sahara Computers. Together with highly critical reports about The New Age, its false starts and the walk-out of paper’s first editorial leadership, 2010 proved an “annus horribilis” for the Guptas in terms of media coverage.

The New Age has been criticised for not covering the goings on of the Guptas, but according to Jeffreys this isn’t the paper’s focus. “The nature of our media, and this is not a criticism, is that we are very urban-centred and fascinated with elites, with the goings on of elites in the public and private sector. We have drifted into coverage on the celebrity of politics, and it is not necessarily wrong. Every publication must decide what they[sic] want to do. We are trying to look at the society from a completely different angle and perspective. We may be off to a small start, but that’s what we want to do. To bring those stories from the places that you and I hardly know of into the limelight and give voice to those people. It’s very important if you have a truly functioning democracy that those stories be heard by the powerful and the influential.”

The New Age won’t readily feed South Africa’s celebrity-hungry populace stories on the doings of the local business and political power elite, but Jeffreys says it will take a hard-core approach to corruption. Where the paper may make its greatest contribution to the public discourse is by giving voice to those who have been largely marginalised by the national press. “This newspaper is one of the few where an investment has been made so that journalists can get out there and get the stories. We have appointed two people in each of the nine provinces, which is not sufficient to fully cover the province, but at least it gives us a big foot in the door to bring those stories into the national debate. Regional papers are reporting on their areas, but it is in the national discourse where those issues, places and people disappear. We want to shine some light on that.”

Jeffreys insists his journalists won’t be desk-bound, but will be pushed out the door and into the streets. “Our approach is to say that telephone journalism is out, and people have to go out there and get the story. For the lead story of our launch edition the journalists had to go out there and find Moses Sithole’s friend, Johannes Rapau.” Yesterday’s edition of The New Age led with the story of Rapau waiting 10 years for a promised R500,000 reward after helping put one of this country’s worst serial killers in jail.

“We are also going to try to avoid this whole tendency towards hunting in packs. Say a particular newspaper breaks a story, and every title follows that story. Of course, if it is a particularly interesting story one should take note of it, but if you can’t add any value to it, take note and move on. Unless you are able to get new information which can stand on its own merit, you just end up following up each other’s stories.”

The New Age’s editor says investigative reporting will be a strong feature of its arsenal to capture readers. “As soon as we build our capacity to do investigations that is what we are going to do because that is the competitive advantage. Newspapers that break stories do well with readers because people like to read stories that have been broken and stuff that is being revealed. Those newspapers which are strong have quite an investigative strength to their journalism. We want to build our capacity in that arena. We will be focusing on anti-corruption.”

Predictably in the first issue of The New Age, Jeffreys declared his independence by saying: “Despite what has been said about us, we hold no brief for any political party or formation. We are proudly South African and fiercely independent – owing our allegiance only to our readers and South Africa.

“We will, generally, support the government of the day, at all levels. This means The New Age will, as a general rule, support the national government, the various provincial governments and whoever governs particular municipalities – provided they fulfil their mandates and live up to the voters’ trust.”

With corruption becoming a strong feature of local, provincial and national government, this is where The New Age’s editorial calibre will be most tested. “I don’t have a problem-solving procedure for difficult decisions. I look at every situation on its merits and take the decision whether to spike or publish. If you have doubts, but your instincts tell you that this is right, I leave it to each story rather than taking a golden-rule approach.”

When it comes to making tough editorial calls Jeffreys says he is a rationalist who uses his gut. “I am quite an instinctive person, and this is what sometimes makes me frustrating to work with because I also do try to work things out in a rational way, and I always ask the question ‘where’s the logic in this?’ But sometimes I follow my instincts and make calls, and sometimes you find the next day you haven’t made the correct call.”

The call to push journalists into the field, to cover local stories on service delivery and other social issues that haven’t been covered by the national press is admirable because of the contribution this will make to our democracy and how it could inform the public discourse. But this is not where The New Age will be tested, because who wouldn’t welcome giving a voice to the voiceless?

Where the paper will face its toughest challenge is in reporting on the marginalised who have been betrayed by those they have put in power. The more difficult decisions will be about how to report on those who are stealing from the electorate and on the ever-present spectre of fraud, nepotism, mismanagement and corruption that plagues this country. We will follow The New Age’s journey with keen interest. DM