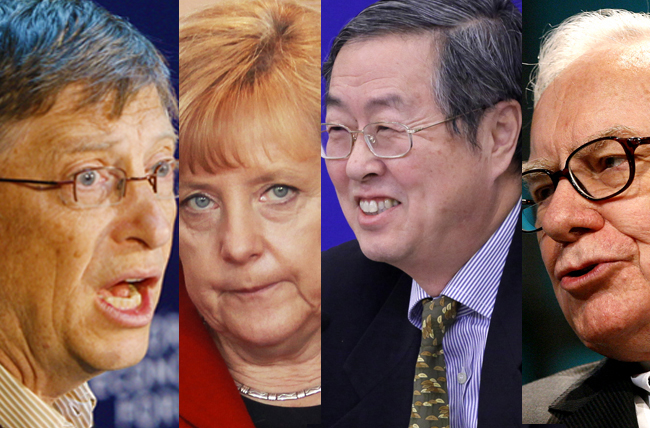 It’s that time of the year again. Government effectiveness scorecards and grades, top 10 (or 100) lists are everywhere. Major international magazines offer up their “Person of the Year” selections. And the brilliant Foreign Policy magazine has just delivered its second annual global thinkers list of its 100 most influential people in the world. By BROOKS SPECTOR.

Foreign Policy ranks the top 10 this year as Warren Buffett and Bill Gates, Dominique Strauss-Kahn and Robert Zoellick, Barack Obama, Zhou Xiaochuan, Ben Bernanke, Celso Amorim, Ahmet Davutoglu, General David Petraeus, Robert Gates and Angela Merkel in that order. Though American-heavy, the list runs towards the impact and influence of economic decision-makers like Buffett, Gates, Zhou, Bernanke, Strauss-Kahn and Zoellick. But no Vladmir Putin, David Cameron or Nicholas Sarkozy from Europe. China gets its top banker, while the “third world” basically gets the Turkish and Brazilian foreign ministers – Davutoglu and Amorim – and US General Petraeus in Afghanistan. No Indians or Africans, no musicians, novelists, artists or broadcasters and only a sprinkling of business leaders.

This is not a new idea, of course, though Buffett and Gates are carrying it out with a special thoroughness. Andrew Carnegie, the industrialist who created US Steel, had determined to give away most of his money when he set up foundations to promote world peace, endowed libraries around the world and generally did lots of other good things with all the money he had made from his non-union wage slaves in Pittsburgh’s satanic mills.

Carnegie famously wrote of his intentions in an essay, “The Gospel of Wealth” that described the responsibility of philanthropy by the upper class of self-made wealthy. Carnegie worried about the peril of allowing large amounts of money to be passed on to persons or organisations ill-equipped mentally to cope with them. As a result, the wealthy entrepreneur must assume the responsibility of distributing his fortune in a way that it will be put to good use, and not wasted on frivolous expenditure.

“We start, then, with a condition of affairs under which the best interests of the race are promoted, but which inevitably gives wealth to the few. Thus far, accepting conditions as they exist, the situation can be surveyed and pronounced good. The question then arises – and, if the foregoing be correct, it is the only question with which we have to deal – what is the proper mode of administering wealth after the laws upon which civilization is founded have thrown it into the hands of the few?”

Buffett and Gates have clearly supped eagerly at Carnegie’s intellectual table. The two billionaires have been going around the globe to create a club of “Great Givers”; to transform philanthropy from being a pastime into a calling for everyone who is rich. Since 2006, Buffett has pledged to give 99% of his assets to charity – much of it to Gates’s foundation, which already spends more than $2 billion a year to improve public health and development. As a result, the two have become an unlikely but formidable pair of super-rich evangelists, preaching an updated Carnegie gospel of capitalist riches being put to solving global problems.

Lists like this one from Foreign Policy may lead one to recall the old joke of whether grave crises call forth great leaders – or if great leaders bring forth grave crises. Think for a moment what a global thinkers list might have looked like in 1941. It would obviously have included Winston Churchill, Franklin and Eleanor Roosevelt, John Maynard Keynes, Reinhold Niebuhr, Pearl Buck, John Steinbeck, Jesse Owens, Picasso, Igor Stravinsky, Edward R Murrow and Albert Einstein. But it almost certainly would also have to included Generals Von Rundstedt and Guderin, Admirals Yamamoto, Darlan and Horthy, Adolph Hitler, Joseph Stalin, Francisco Franco, Chaing Kai-Shek, Vidkun Quisling, Benito Mussolini and Emperor Hirohito – and industrial specialist Albert Speer. Ouch.

Most of those who led or inspired the great political or economic efforts and movements of the last half of the 20th century were still on the fringes of events. Kwame Nkrumah, Sukarno and Franz Fanon were still students; Martin Luther King was a child. Mao Zhe Dong, Ho Chi Minh, and Charles de Gaulle were nearly finished as fighters. Shigeru Yoshida was still a discredited politician waiting for a return to active politics. In case that last name is less than obvious, Yoshida’s economic policies in post-war Japan effectively gave the world the developmental state. Of the American civil rights revolution a generation later, perhaps only its early theorist, W E B DuBois, was at the top of his game.

Of course, a list of political leaders already on the scene by 1941 and who continued to affect the world (for good or ill) for decades later might well have included people like Mahatma Gandhi, Mohammed Ali Jinnah, David Ben Gurion and Juan Peron, but their trajectories were barely discernable then. Perhaps only Jan Smuts or Haile Selassi would have made it into the top echelon from Africa.

On this year’s list, as one goes through the entire 100 positions, the dismal science is the big winner. There are lots of economists, lots of ‘em. Maybe that’s not really a surprise, given what the world has been through since 2008. The list includes Daron Acemoglu (already tipped as an odds-on favourite to win the Nobel Memorial Prize in Economics soon), Nouriel Roubini, Paul Krugman, Raghuram Rajan, Paul Collier, Joseph Stiglitz, Martin Wolf, Paul Romer, Esther Duflo, Robet Shiller, Jacques Attali, Sendhil Mullainathan, Richard Thaler, Fan Gang among a gaggle of others. But coming in behind Keynes and Samuelson’s intellectual children, are a whole range of social thinkers and entrepreneurs, especially those evaluating or exploiting the growing impact of the Internet revolution. This list includes Ory Okolloh, the Kenyan guru of crowd sourcing, Jeff Bezos of Amazon, Web guru Clay Shirky, and Sergey Brin and Larry Page of Google.

While there are lots of new-age politicians, the list also wheels out the old folks. Former US secretaries of state Henry Kissinger, George Shultz and Madelaine Albright, former senator Sam Nunn, and former defence secretary William Perry still make the list by virtue of their activities on things like nuclear disarmament.

While mainline politicians are present, climate change specialists, greens and environmentalists are also pretty prominent as well. This includes Vaclav Smil of Canada, Belgium’s Monica Frassoni, Germany’s Renate Kunast and Brazil’s Marina Silva (the former environment minister and a recent candidate for that country’s presidency). Iranian Green movement campaigner Mehdi Karroubi is there too, as well as Maldives President and environmental campaigner Mohamed Nasheed. But perhaps the most interesting name on the list is at number 28, right behind Fareed Zakaria, Shai Agassi. No, not the tennis player’s younger brother. Agassi is an Israeli who is setting up a national grid for the affordable electric/rechargeable cars he is manufacturing.

Naturally too, the recently released from house arrest Burmese human rights campaigner, Aung San Suu Kyi, is there at no. 75. The well-known Burmese leader comes in ahead of lesser-known figures like Afghan human rights activist Malalai Joya and global activists like Ethan Zuckerman of Global Voices or the President of Finland, Tarja Halonen.

And perhaps too the fracture zone between the West and Islam has some serious names on it this year. These are conciliators for the most part. Foreign Policy’s editors put New York City mayor Michael Bloomberg and New York City Imam Feisal Abdul Rauf at 11th place for their efforts to keep America’s obsession with and frenzy about Islam in check. And they added Iranian-born religious scholar Abdolkarim Soroushfor, Palestinian Prime Minister Salam Fayyad, Somali/Dutch/American Islamic women’s rights campaigner Ayaan Hirsi Ali and “accommodationist” religious scholar Tariq Ramadan as well.

The saddest thing, perhaps, besides the total lack of artists and musicians, is the paucity of Africans. While Kenya’s Ory Okolloh, Liberia’s Ellen Johnson Sirleaf, Tanzania’s Mo Ibrahim, Botswana’s Judge Unity Dow, Egyptian former UN official Mohamed El Baradei are there, there are no South Africans – something that is sad considering the possibilities just a few years ago. Of course, while a list like this can be a terribly subjective thing, this one seems well-researched, well-balanced and well-considered. The paucity of Africans – and the absence of South Africans specifically – can be read as a warning tocsin for South Africa over the impact of its intellectual capital these days as it tries to fight above its weight, join the BRIC nations and push for that elusive permanent seat at the main table in world affairs. DM