New BMW X3: A Jack of all terrains?

New BMW X3: A Jack of all terrains? 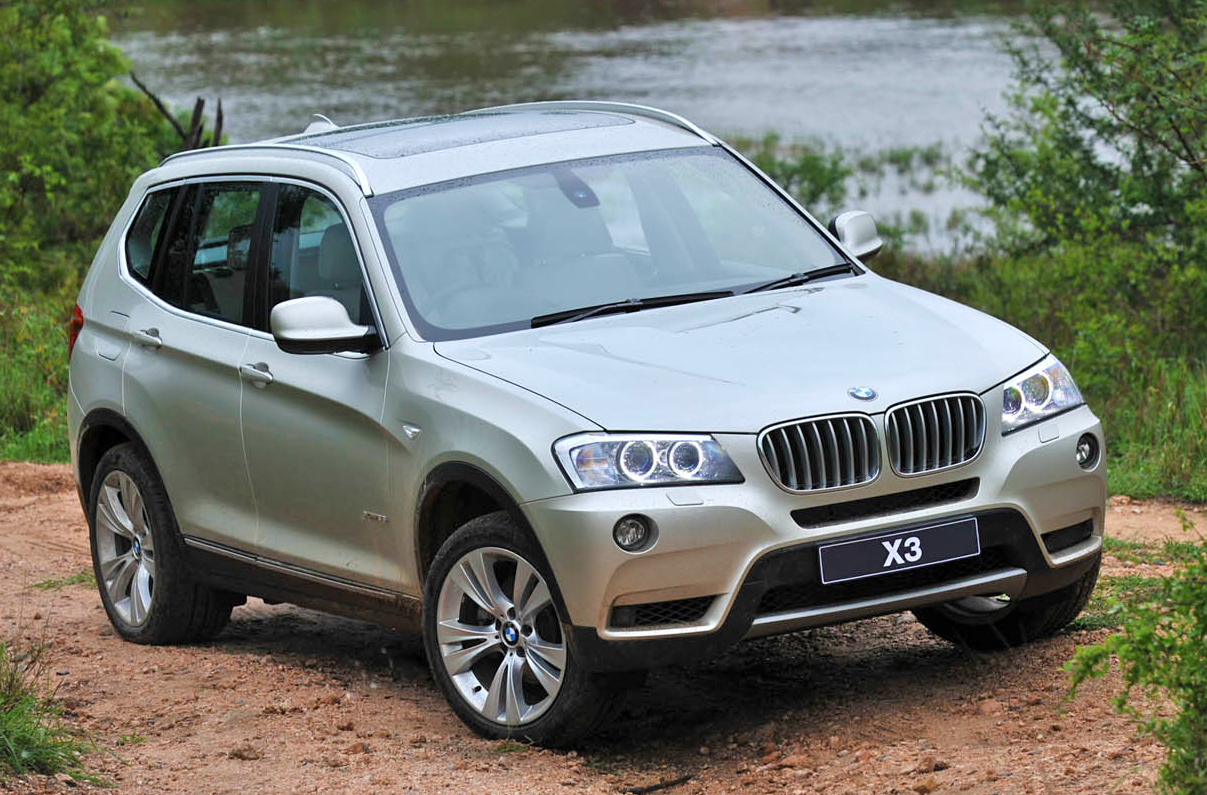 By definition, a sports utility vehicle – a.k.a. SUV – has to be everything to everybody: sports car, utility wagon, 4x4 workhorse. Even mom’s taxi. However, such versatility often comes at the price of true excellence - a Jack of all trades emerging as master of none. BMW’s X3 tends to be considered more urban warrior than off-road adventurer, but in reality its talents extend further. By DEON SCHOEMAN.

BMW South Africa chose to launch the all-new, second-generation X3 in Mpumalanga, a region rich in driving opportunities, both on and off the road. Since the Beemer is supposed to take most terrains in its stride, the rollercoaster of tar and dirt promised a perfect playground for the new machine.

But there’s reason to be cheerful even before you get in and drive the vehicle. The original X3 may have been a competent compact SUV, but its tall and apparently narrow shape was never going to win any beauty prizes.

By comparison, its successor has found visual balance akin to that of its larger X5 stablemate. The stance is wider and more purposeful, the shape muscular without appearing too bulky or blunt. Of course, it’s unmistakably BMW, thanks to the prominent kidney grilles, now either black or silver depending on the engine providing the muscle. On the topic of engines, the X3 currently comes in two flavours: petrol or diesel. Both turbocharged.

The X3 xDrive20d – to give it is full and somewhat clumsy title – employs a two-litre turbodiesel engine, now rated at 135kW of maximum power. The torque peak of 380Nm is already on stream by the time the rev counter reads 1,750r/min.

The petrol-driven alternative is the xDrive35i, which employs a turbocharged, 3,0-litre straight-six engine – even though the badge confusingly suggests a 3,5-litre capacity. Still, it’s a lusty powerplant, good for 225kW and 440Nm, and already familiar from its many other applications in the BMW family.

Both engines drive all four wheels of the X3 via the latest eight-speed automatic gearbox, and the xDrive all-wheel drive system. The latter operates seamlessly in the background, splitting urge between the front and rear axles depending on traction requirements.

In both instances, performance is brisk enough to earn the “sport” part of the SUV badge. The xDrive20d’s factory figures suggest a 0-100km/h sprint time of 8,5 seconds and 205km/h top speed – figures feel vindicated in practice.

The xDrive35i is substantially brisker, completing the 0-to-100 dash in a mere 5,7 sec and reaching 225km/h. That will put many a so-called hot hatch to shame.

In practice the xDrive35i is the smoother and easier machine to pilot. The engine spins along with creamy ease, and the turbo spools up so seamlessly that lag is utterly absent. In fact, it feels more like a big-capacity six or even eight, than a turbocharged engine.

The two-litre diesel is muscular enough, but it does require a bit of deft interplay between clutch and throttle to iron out an initial turbo lag. It’s not a big issue, and one that’s easily overcome, thanks in part also to the closely stacked gearbox ratios, and the auto box’s ultra-smooth action Both versions can be ordered with a dynamic drive system that add “sport” and “sport plus” modes to the vehicle’s repertoire. These settings change elements such as gearbox shift speeds and reactions, throttle mapping and power steering calibration, as well as the way the stability control system provides its assistance.

In the xDrive35i, choosing “sport” mode results in fast, staccato cog swaps that are almost touring car-like in their abruptness and are unlikely to please typical X3 buyers. The diesel X3 benefits more, with that lag becoming rather less apparent thanks to the sharper throttle response.

Driving both X3s on Mpumalanga’s sweeping tar roads and scenic passes underscored how capable the SUV is when driven with some gusto. Despite the raised seating position and the tall body, the Beemer feels swift and responsive through fast sweeps, with less body roll than expected and plenty of grip.

Even pushed hard into corners, the overall approach is mainly neutral, with much less of a tendency towards understeer than expected from an all-wheel drive vehicle – and especially one weighing in at a substantial 1.8 tons. The electric power steering, introduced as part of a package of “green” measures under BMW’s Efficient Dynamics banner, can feel a little anodyne in straight-line terms, but loads up markedly in the twisties and does provide fair feedback

When you do need to slow down, the big brakes do a decent job – useful when you encounter a logging truck putting along at 20km/h around a blind corner …

The xDrive 35i is effortless in every respect, covering ground with almost indecent haste while costing its occupants in lavish luxury. The xDrive20d is not as swift, but still incisive enough in dynamic terms, and is arguably the better all-round choice – although a manual gearbox option would have been nice.

Part of the reason for our xDrive20d preference is fuel consumption. Given its performance, the xDrive35i is no guzzler, but the 13,4litres/100 km we saw during our admittedly enthusiastic driving on the launch is a far cry from BMW’s claimed 8,8 l/100km for the combined cycle.

The diesel easily comes in under 10litres/100 km, regardless how hard you drive, and cruising sensibly on the open road will get you more than 1,000kms down the road before you need to visit the low-sulphur diesel pump.

BMW is making much of its Efficient Dynamics measure, which in the X3 also includes start/stop and regenerative braking. The former takes a little getting used to: as soon as the vehicle is stationary, at a red traffic light, for  instance, the engine will cut out. As soon as you touch the accelerator, it starts up instantly. Under braking, the X3’s battery is charged to allow ancillaries like the climate control system to work even when stationary, and to ensure there’s enough juice for the starter motor to get you going, every time.

However, it’s on the rougher stuff that the X3 shines brighter than expected. True, it lacks the ground clearance of a real 4×4, as well as the low-range gear set, but at 26 and 23 degrees, it does offer decent approach and departure angles, at least by “soft-roader” standards.

The xDrive system works seamlessly and competently to maintain traction, with no effort from the driver except to choose the best path through off-road terrain. Experience obviously helps, but the X3 exudes an unexpected competence in these conditions.

The test cars on launch ran on the optional, sexier 19-inch wheel/tyre combination, but the standard, higher-profile 17s would be a better bet for those intending to do regular gravel work – and might well be more comfortable too.

On fast, open gravel, the new Beemer feels stable and resolute, and isn’t easily put off by sand or rougher surfaces. It’s a good test of the vehicle’s build integrity, which was impressive in all the examples we drove.

The new X3 is significantly larger than the original – so much so, in fact, that it is easily mistaken for the X5. Side by side, the X3 remains the more compact vehicle, expressing its wieldier, more agile demeanour. The extra dimensions have allowed a lot more interior space, especially for rear occupants, as well as a pretty decent boot. Talking of interiors, the X3 benefits from BMW’s latest design refinements, many of them reminiscent of the recently updated X5, and the new 5-Series, launched earlier this year. Baseline cockpits are perhaps the most attractive, as the more upmarket versions – at least the ones in the launch fleet – sported glossy wood trim which looked a little out of place.

By comparison, the normal interior, with plain black detailing, looked smarter and more in keeping with the X3’s character – but that, of course, is a matter of taste.

Seating is comfortable and supportive up front, and much roomier than before at the back, while there’s 550litres of luggage space. Fold down the split rear seat, and that space can be increased to a voluminous 1,600litres.

As SUVs go, the new X3 gets most things right. It’s compact and wieldy enough to make for entertaining driving and commuting, yet offers ample space in a comfortably appointed cabin. The dynamics are to BMW’s usual high standard in both versions, and competence extends across both tar and dirt surfaces.

No, this is not a Cape-to-Cairo contender, but the X3 personifies the upmarket versatility and engaging driving we’ve come to expect of BMW’s X-cars. And we certainly prefer its more compact dimensions and sportier edge to the larger X5.

Pricing, however, dictates that the new X3 will only find its way into the Xmas stockings of the well-heeled. Depending on variant and options, baseline xDrive20ds start at around R465,000, while the xDrive35i demands in excess of R600,000.

Looks like an old pre-owned Defender will have to do the trick. DM