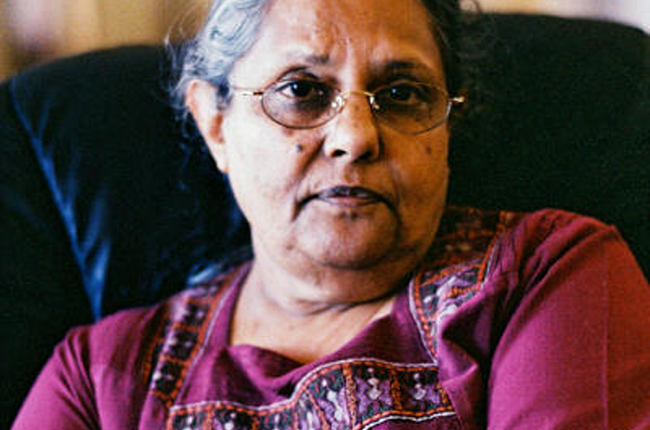 Ela Gandhi, one of modern South Africa’s most remarkable ex-politicians, is a woman wedged between two vast historical moments. The first was the partition of India in 1947; the second South Africa’s own transition in 1994. That she emerged from both with certain notions firmly in place – and her passion for social justice entirely undulled – is testament to the ideals that propelled both of those incidents, if not to their eventual outcomes. By RICHARD POPLAK.

Gandhi is now 70 years old. Since retiring midway through her second term as an ANC MP in 2003, she has become a small-scale media activist. What, we wonder, does it mean to grow up on Mohandas Karamchand Gandhi’s knee, to listen to the man articulate the principals of satyagraha – non-violent resistance – only to watch an independent India transition into the bloody chaos of partition? What does it mean to stand by as Nelson Mandela walks free from prison, propelled by wave after wave of local and international optimism, only to sit in an ANC-led Parliament that rots before your eyes? There is something fundamental in the confluence of these two experiences, something that allows Ela Gandhi her entrenched sadness and prodigious wisdom.

The Daily Maverick recently met Gandhi for a chat on the sunny patio of the Sandton Sun Hotel. She entered in a blue sari, entirely incongruous. Behind her, an over-groomed European couple cavorted in the pool. She apologised for her tardiness; there was a delay at the airport. She spoke in a low voice, battling against the traffic noise on the other side of the hotel’s wall.

Her political story properly begins long before she was born. Her grandfather arrived in South Africa in 1893, and famously received a dose of local hospitality as soon as he arrived. Smacked around on his first train ride, kicked off a stagecoach, and generally introduced to “Empire: The African Edition”, Gandhi’s engagement with non-violent resistance began in this country. (Which is not to say he saw a corollary between the situation of Indians and blacks, who he considered at the time as inferior.) He helped form the National Indian Congress (NIC) in 1894, and was thus instrumental in moulding the Indian community into a singular and united political bloc.

Ela Gandhi’s fate is entirely bound up with that of the NIC. She was born in 1940, and has lived much of her life in the Indian township of Phoenix, 20km north of Durban. She spent some of her childhood in Gandhi’s ashram in Delhi, and enjoyed an hour every day with her grandfather during the critical years of independence. Her childhood cast of characters – Louis Mountbatten, Jawaharwal Nehru, Muhammad Ali Jinnah, and her own grandfather – would later be mirrored by those she would encounter during the end of apartheid. When she returned to South Africa, her grandfather sent her a letter shortly before his assassination by Hindu nationalists in January 1948: “He told me I should consider a vow of silence. I talked too much as a little girl.”

Unsurprisingly, her parents were intimately involved in social justice issues, especially after apartheid was officially established in 1948. She is particularly proud of their rebuilding the house in which her grandfather lived, and using it as a schoolhouse to educate 300 black children from Inanda, thus contravening the loathed Bantu Act. She recalls a 1949 march against the Group Areas Act that she witnessed on the shoulders of her father.

These local acts of satyagraha helped formulate her own political sensibilities. She learned in high school and university how limited her options were, and after marrying, became a social worker. In 1961, the NIC was banned along with most other political parties, and suddenly, a new generation of activists realised that, with the opposition leadership either in jail or in exile, they could no longer indulge in the luxury of following. Gandhi was named to the executive of the NIC in 1971. Gender issues were at the top of her to-do list and have, sadly, remained so.

“We were intimately tied up with the Black Consciousness movement,” she told us. “We would debate with [Steve] Biko late into the night—is black consciousness a means to an end, or an end in itself?” In other words, in what direction was underground opposition going, and what was the end game? “We would debate the Freedom Charter and what it meant. We would talk about the education system, and wonder how we could engage with the masses.”

Mostly, it was a matter of “thinking black, not Indian. And thinking South African, not just Phoenix.” It was the intellectual moment in which this country was properly invented by the rank and file who would become backbench MPs and bureaucrats when apartheid ended. It was a heady, intense time.

Gandhi was intimately involved in the grassroots mobilisation, along with the South Africa Students’ Organisation, the National Union of SA Students, Cosatu and the SA Communist Party. She saw infighting between the ANC, the Pan-Africanist Congress and the Azanian People’s Organisation. She watched political fault lines develop. She watched the future unfold before her eyes, and in the years between 1990 and 1993, she sat on committee after committee, as an executive representative of the NIC, trying to turn the Freedom Charter into policy, and policy into practice.

Her one-and-a-half terms in Parliament were not salutary. “What concerned me in my second term,” she says, “was delivery. People were just not getting what they needed. I don’t blame anyone for it – I don’t know if it was a question of skills or of old staff who needed to unlearn old habits. But it was a nightmare.”

She came to an important realisation, resigned, and instead took a back-road to political engagement: “Power lies in the people. If they know what their rights are, they’ll get what they need. If they’re ignorant, they won’t get anything at all.” This may sound like disillusionment, but Gandhi has used it as a call to action. “I felt I could no longer earn a salary for nothing. I had to be among the community.” There are very few politicians, anywhere in the world, who have uttered similar sentiments.

When asked about her old colleagues, Gandhi gets a faraway look in her eye.”I have mixed feelings. We’re not a perfect country, but there are people in the ANC that make you feel proud. And some who really disgust you.”

Satyagraha is her seven-year-old monthly newspaper, with a circulation of 15,000, which enjoys the tag-line: In Pursuit of Truth. It’s a small endeavour, and a noble one, hitching Gandhian principles to the lamestream media. And unlike the whoever coined of that last term, she is a genuine maverick. “My grandfather believed that a paper should hold human values, basic values, and that it was about writing good stories that educate. It was about taking seriously the grievances of the people, interpreting laws and the reactions to those laws.

“I wasn’t happy with the media,” she said, looking us hacks in the eye. “It can’t always be about attacking personalities and about pessimism. None of the media is doing what my grandfather set out to do. They are not setting out the formulation for transformation.”

Satyagraha ain’t the New York Times. It’s small scale, by any standard. But Gandhi feels that it is becoming increasingly influential, with a growing readership, and a newsroom that is learning the trade. There will come a day, she believes, when her grandfather’s spirit will find a voice in the media. Let’s hope she’s right.

Not to get too meta, but this, then, is an attempt at an article in the satyagraha spirit, It trumps optimism over pessimism, principles over pragmatism and basic values over naked ideology. At an interview where we drank water instead of the journalistic daytime liquid standby – flagons of white wine – we learnt once again about the power of what we do. Ela Gandhi is sandwiched between two of history’s great events, both of which have curdled, neither of which is without its good points. She is thus a local treasure.

Now, back to your daily diet of negativity. DM