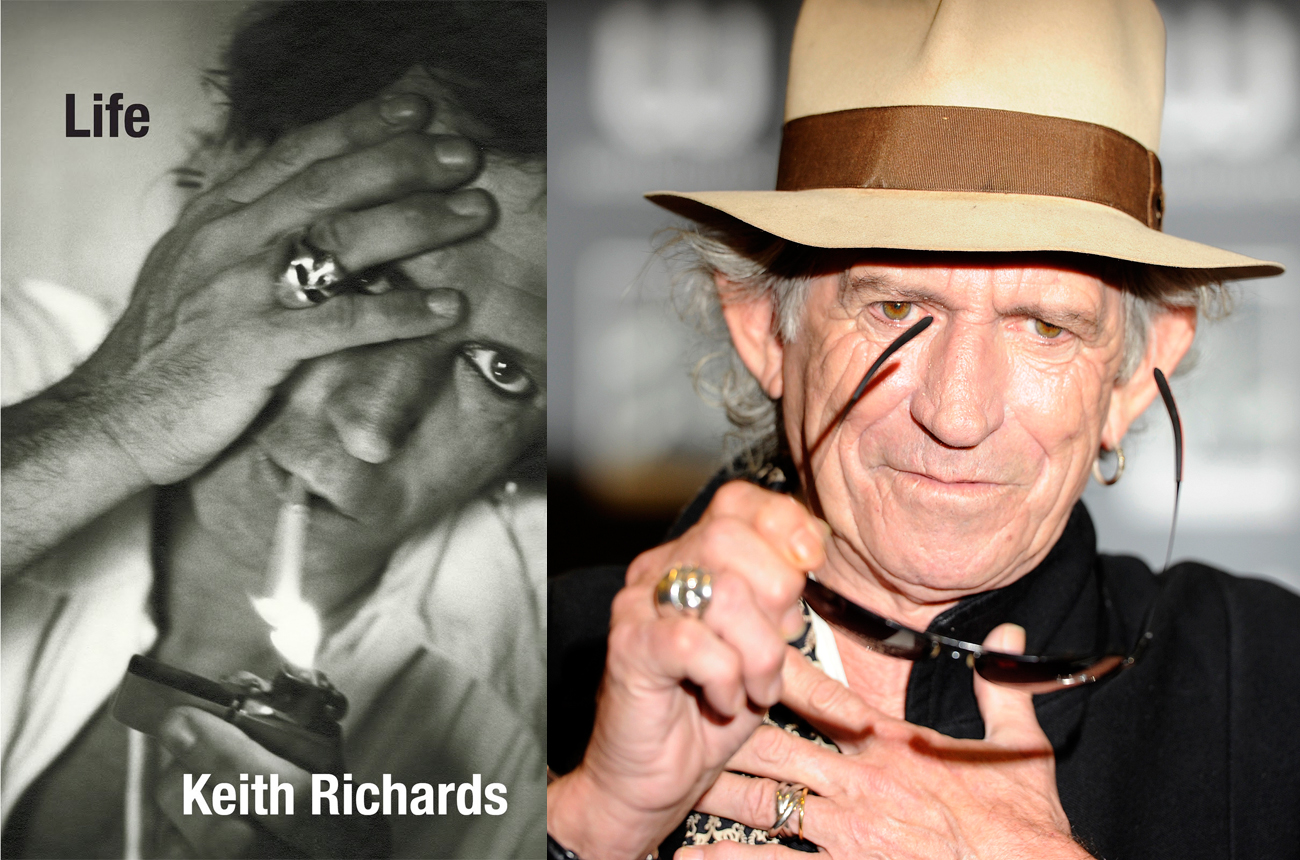 Life, Keith Richards’s new, mega-selling autobiography, tells us little we didn’t already know. But some stories, it turns out, are worth hearing twice. The book is a rollicking picaresque of rock’s second most important band. Thankfully, Life isn’t the literary equivalent of Bridges to Babylon, but of Sticky Fingers. By RICHARD POPLAK.

It is not unreasonable to suggest that the rock autobiography (a flexible term, but more on that in a minute) functions in much the same manner as the Gospels. Just as Jesus’s narrative, related from multiple points of view, tells of a journey that ends in the protagonist nailed to a cross for our sins, so too do rock gods end up on a proxy crucifix of sorts. For every tired suburban marriage we slowly screw up, they bed thousands. For every lukewarm cup of tea we drink watching Gossip Girl, they consume flagons of Jim Beam while groupies cavort in inflatable pools filled with jelly. They sin for our suffering; they party for our boredom. Their job is to limn the furthest possibilities of sensual, hedonistic human experience, while we commute to a drab office listening to their music on repeat. It’s an unfair trade-off, but not everyone can do industrial grade quantities of cocaine while Anita Pallenberg looks on.

Keith Richards, on the other hand, could. Which is both the inherent problem with – and the minor triumph of – his discursive, surprisingly genial Life (guided through the thickets by the sure hand of British journalist James Fox.) It’s acknowledged fact that Richards’s life was one of extreme excess; indeed, he’s the poster boy for rock’s drink ‘n’ druggie sturm und drang. What could he possibly reveal that would compete with the hoary canard? We know that he and Mick Jagger haven’t gotten on for years. We know that at the age of 63 he was still getting blottoed enough to fall out of a coconut tree and suffer a serious head injury. We also know that his artistry, along with that of his bandmates, curdled thirty years ago, and he now peddles a shiny form of Nostalgia Inc. that generates hundreds of millions of dollars a year. We have Stanley Booth’s The True Adventures of the Rolling Stones; Robert Greenfield’s Stones Touring Party; this year’s essential DVD box-set reissue of Exile on Main Street as third-party testimony. What’s left to learn, then?

Life, at its best, reveals the sensibility behind the legend: a generally sweet, if utterly amoral, hyper-focused and reverent music nerd. Richards is never confessional, and rarely slips into the insular self-excoriation of the Metallica documentary Some Kind of Monster. Life benefits from a wider aperture, and Richards is wise enough to understand that he was a part of something. “Hair,” he writes, of the greasy locks that established his suburban notoriety, and cemented his international infamy, “the little things you wouldn’t think about that changed whole cultures. When you look back it was relentless confrontation.”

The book’s early chapters, set in Dartford, Kent, walk us through the unremitting grimness of post-war London suburbia – rubble-strewn streets, shoddy council estates, food stamps. Ever the addict, young Richards’s principal concern was the lack of sweets. (“I’ve always had trouble scoring,” he lies.) At their best, these passages bring to mind Peter O’Toole’s astonishingly literate Loitering With Intent. O’Toole was born in 1932, ten years before Richards, but both reveal the importance of early encounters with art – theatre in O’Toole’s case; Elvis in Richards’s – and how transformative those experiences became. They were portals out of the grey. They were harbingers of possibility.

This, we learn as we obsessively turn the pages, is rank hypocrisy (Jagger sleeps with Pallenberg, stolen by Richards from Brian Jones, on the set of “Performance”. Richards returns the favour by banging Marianne Faithfull, the love of Jagger’s life). The inconsistencies become endearing, because Richards emerges as fully, stupidly human. We also take notes on how to stay alive as the world’s best known coke and smack fiend: Only ingest top notch stuff. Drugs of the kind Richards used in the most fertile period of his career, between 1968 and the mid-seventies, no longer exist. He enjoyed Merck cocaine so fluffy it resembled fresh drifts of powdered snow atop Mont Blanc; he used heroin so pure it was the platonic ideal of high. His junk was practically farm grown organic – as juicy and nutrient-rich as an heirloom tomato off the vine. It’s the ciggies that’ll kill him in the end.

We watch him bond with Mick at school, “our tastes in music…identical”. We watch them form a band, and, “suddenly we were being courted by half the aristocracy, the younger scions, the heirs to some ancient pile, the Ormsby-Gores, the Tennants, the whole lot. I’ve never known if they were slumming or we were snobbing.” The Rolling Stones were on a roll, and the rest is, well, the rest.

WikiLeaks has reminded us that history, transposed as gossip, is far more piquant when it is fresh. What then, is the principal pleasure of Life? It’s voice. Fox, who must be credited with assembling Richards’ anecdotes into a coherent, easily navigable story (making this less of a memoir, and more of an usmoir), has allowed Richards’s turn of phrase, wit and personality to sing with remarkable clarity. It’s as if we’re sharing a pint of Jack Daniels with Richards in the back of a cozy pub. There are superb lines. Of the 1972 American tour, he writes: “We had become a pirate nation, moving on a huge scale under our own flag, with lawyers, clowns, attendants.” Nothing more need be written about rock ‘n’ roll excess.

But plenty more shall be, and Life will stand tall in the pantheon. Richards perfectly understands the role he has played for the better part of the last half-century, and he acknowledges his status as avatar, and of the strange quid pro quo at work in the assemblage of a rock ‘n’ roll persona. “They imagined me, they made me,” he writes of us, the mortals. “Bless their hearts. And I’ll do the best I can to fulfill their needs. They’re wishing me to do things that they can’t. They’ve got to do this job, they’ve got this life, they’re an insurance salesman … but, inside them, there’s a raging Keith Richards.” We made you, Keef. Assuredly so. And a bang up job of it we did. DM

Photo: Keith Richards poses for photographers before signing copies of his autobiography “Life” at a Waterstone’s book shop in London November 3, 2010. REUTERS/Paul Hackett