Côte d'Ivoire: a country on the brink of peace - or wa...

Côte d’Ivoire: a country on the brink of peace – or war 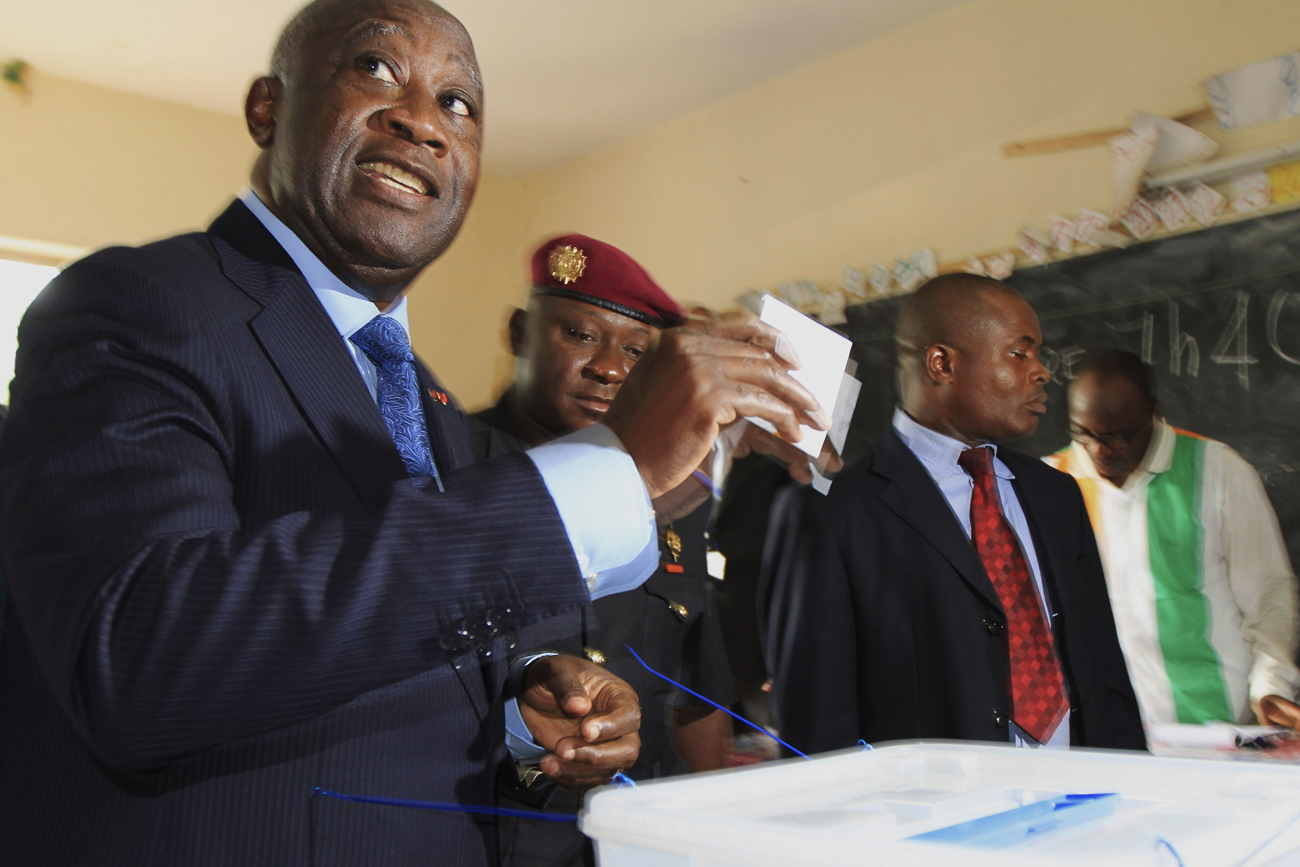 The world is watching Côte d'Ivoire as the former West African economic powerhouse awaits presidential poll results from its provinces. Many fear those results could plunge a country, that so desperately needs investment wheels to start turning again, into another spiral of violence instead. By MANDY DE WAAL.

Côte d’Ivoire is simmering as elections see the face-off between entrenched power and a new presidential hopeful. The standoff is between incumbent President Laurent Gbagbo who has been in power for a decade, and Alassane Ouattara, who is favoured by the West and could bring in investment and donor funding if he realises a successful transition to power.

“Côte d’Ivoire has been in a political limbo for almost 10 years,” says Edward George, senior editor in the Africa department of the Economist Intelligence Unit. “Gbagbo won the election in 2000, but the army tried to overthrow him and in the process the country was split in two. As a result, Gbagbo has been a president without mandate for the past five years.”

Entrenched in power, Gbagbo has enjoyed strong control over the media, particularly in the commercial capital of Abidjan which gives him a media advantage in that region. “The official media keep reporting on him so he gets far more coverage than he should,” says George. This is much to the chagrin of France and other Western countries who are hoping for a change in Côte d’Ivoire, which until 1960 was a French colony.

The West’s hopes are on Ouattara, a former prime minister, is from the north and has a long association with the country. Importantly Ouattara enjoys good relations with key pillars of the global economy. “Ouattara used to work for the International Monetary Fund, has a good reputation in the West and knows all the people at the World Bank. He is also respected as a technocrat. Howeve, one would have to wait and see when he gets into power, because that’s the only time the world will be able to know how good he’d be in government,” says George.

Watch: After the acrimony, rivals face off cordially

Côte d’Ivoire used to be West Africa’s most powerful economy under the rule of Félix Houphouët-Boigny and enjoyed a growth rate of some 10%, the highest among Africa’s non-oil producing states. Houphouët-Boigny realised this growth despite the fact that he was an iron-fisted, controlling and paternalistic ruler. In the lead up to Houphouët-Boigny’s death the country faced political and economic turmoil. Crashing commodity prices and a cruel drought took their toll, and Houphouët-Boigny’s demise saw an increase in ethnic conflict. While Houphouët-Boigny had been careful not to fuel divisions in the country, his successors were less cautious.

Côte d’Ivoire is the world’s leading producer of cocoa, producing some 46% of this commodity used for the production of chocolate. “Cocoa aside, Côte d’Ivoire has a big factory centre and is a major transport hub for West Africa,” says George. “There is huge potential for economic growth with the West, and there’s the fact that the country is one of the biggest employers in the region. Up to 4 million foreigners work on cocoa plantations in Côte d’Ivoire.”

Those beans that create the addictive sweet treat chocaholics the world over crave can only be grown in a few parts of the world, and West Africa is one of the best. Côte d’Ivoire also has the experience and expertise it takes to grow beans that are often difficult to manage. Côte d’Ivoire used to enjoy the lion’s share of cocoa production in the region, but because of the fractious political situation in the country and the poor financial management, it went into decline. It  had to cede some of that power to Ghana, now becoming a strong contender on its own.

Côte d’Ivoire could reclaim its market ownership once it is politically more stable, but investors don’t favour countries marked by political turmoil or where there is a potential for violence. Photo: Presidential candidate Alassane Ouattara greets his supporters after casting his vote in Abidjan November 28, 2010. Polls opened in Ivory Coast on Sunday for the presidential election run-off with fears of violence marring hopes that the vote will draw a line under a decade of political crisis and economic stagnation. REUTERS/Thierry Gouegnon.

Unfortunately, Côte d’Ivoire’s current election has all the potential for bloodshed. The election is essentially a stand-off between north and the south, and between the promise of democracy, investment and growth and entrenched power. Many fear the results could spark an outbreak of violence and, with the UN already reporting three deaths, leaders are calling for calm.

“Gbagbo has already stated that some of the voting in the north was fraudulent, and he would because the north is where he stands to lose. The real danger is if the vote is very close. That could precipitate big trouble,” says George who explains that if one of the candidates wins by decent margin then it is likely to be accepted and peace would prevail.

“If it’s a slim margin, then that’s the difficulty. Both candidates have military forces that support them. Gbagbo has his own militia, but in the north there are ‘New Forces’ (Forces Nouvelles) who claim that they will not support Gbagbo if he is re-elected. The potential for a violent outcome is high.”

Provisional results are expected to come in from the provinces on Tuesday, but George says in all likelihood the final outcome will only be announced on Wednesday. “There’s a strong contingent of security and peacekeeping forces in the country. The UN is present in good strength together with a French military operation, and then the rebels have a joint security force so there is the ability to suppress factional violence. However, it will be very difficult to make one side accept a loss if the results show a narrow margin.”

Final election results will in all likelihood go to the constitutional court to be cleared and the world is keeping its fingers crossed. “If the candidates accept a new president with a democratic mandate, Côte d’Ivoire has the potential to write off a huge amount of debt which has been agreed in principle, but which will only be formalised after a successful election. If Ouattara is the victor, then everyone would know the new president. New government funders and donors would come in and we’d witness a huge splurge in investment, but this all rests on what happens in the next few days.” DM

Main photo: Ivory Coast’s President Laurent Gbagbo casts his vote at Cocody, Abidjan November 28, 2010. Voters in Ivory Coast turned out in lower numbers during early voting on Sunday after an overnight curfew delayed the start of a presidential run-off aimed at ending a decade of political and economic crisis. Incumbent President Gbagbo faces Alassane Ouattara, a former prime minister and senior IMF official, in a tight race that has triggered violence and rekindled simmering tensions in the world’s top cocoa grower, divided by a 2002-2003 civil war. REUTERS/Thierry Gouegnon.