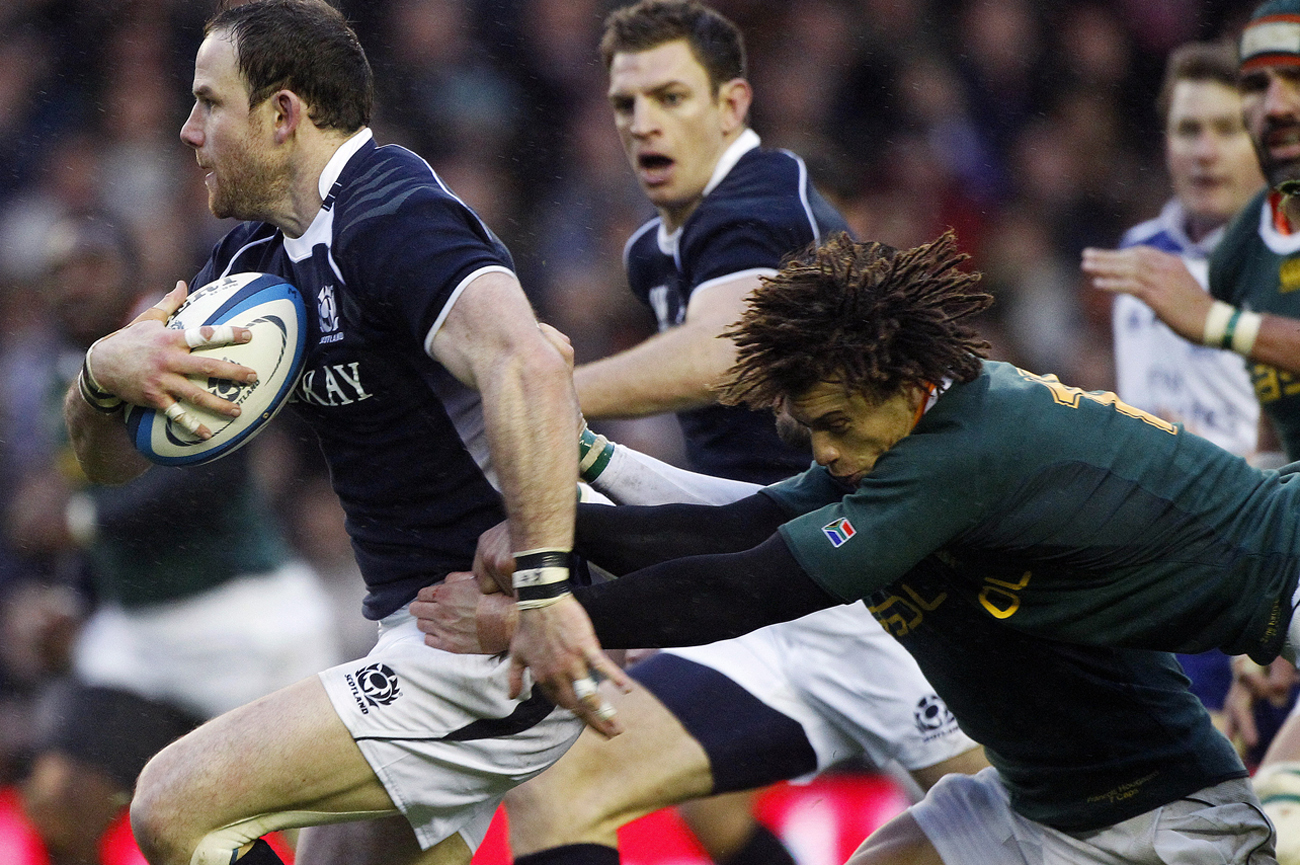 Goodbye Grand Slam. Did it really have to be such an ignominious end? asks TOBY SHAPSHAK, who wishes he could write a one-line match report: "The less said about that the better".

So, that’s that then. In the pouring rain of Edinburgh the dream of South Africa’s first Grand Slam victory since 1961 evaporated, as the Springboks failed to beat a sub-par Scotland team, who embarrassed the world champions 21-17.

The Springboks have fallen back to earth. With a thud. The rejuvenated side that held out against Ireland, and that shone in dramatic a come-from-behind win over Wales, came undone in the downpour against a side thrashed 49-3 a week before by the All Blacks.

Am I unpatriotic for saying it wasn’t unexpected? Or pointing out the usual tactical naiveté  that has been the hallmark of Peter de Villiers’ tenure as coach. Weather reports  predicted it would rain and the Boks, who seldom have a plan B, let alone a plan A, played like “world chumpions” in the words of a seasoned sports editor on Twitter.

For the first 20 minutes it seemed the Boks might capture that cherished Grand Slam, but then the usual complacency slipped in as the game plan moved from carrying the ball up to kick-and-chase –   except the Boks didn’t chase. All the “plan” did was hand possession back to the Scots, who, inspired by flyhalf Dan Parks, got the upper hand with a flawless kicking display in the wet.

The Springboks were lucky to win their first two matches, in spite of how well they played against the Irish, but there was hope that after their abysmal year, they had found an unknown, untapped reservoir of pride. Sadly, it was not to be. But was it just the weather or the Springboks’ inability to adapt to the weather that was to blame?

The sympathy vote might say the former, a poor southern hemisphere team drenched in the cold and wet of a European winter. But these are the world champions. You expect more. As you expected more in the Tri-Nations. At times the execution was appalling, with the imperious Springbok lineout losing three in a row off their own throw.

Even the only try of the match – to replacement Willem Alberts – appeared to come off a mistake in an attacking lineout five metres out that sailed over the head of its intended target, Victor Matfield. It took the Boks to within striking range of a penalty or drop goal to win, had Pat Lambie goaled the conversion, but the replacement flyhalf skewed it wide. Now the Boks needed a try or two penalties to win. It was too much to ask, and by that stage already too late.

As usual, with their backs to the wall, the world champions (yes, world champions) were bereft of ideas, tactically clueless and made countless handling errors. They presented the Scots with more possession than one-eye referee Stuart Dickinson, who missed many Scottish indiscretions and pipped the Boks relentlessly, especially in the second 20 minutes of the first half.

Until Albert’s bullocking try (his second in his two Tests), the only points scored were kicks. Morné Steyn goaled two in the first 20 minutes when the Springboks appeared dominant. But his counterpart, Parks clawed back the lead, starting with a drop goal and then a penalty at a time, as the Scots gained the upper hand.

By half-time it was 12-6 to Scotland, thanks largely to referee Dickinson, so often the Boks’ nemesis, who penalised them over and over again. Parks, who was felled by a monstrous tackle in the second half, but rose back up after a few minutes, kept kicking the penalties. Steyn added another two, before being replaced by Lambie, as bizarre a substitution as ever given the conditions and the need for Steyn’s dead-eye kicking.

The Boks marshalled themselves well, even as their handling let them down. Ruan Pienaar brought stability and wet weather nous when he replaced Francois Hougaard just after half time, and his former Sharks teammates Ryan Kankowski and debutant Lwazi Mvovo acquitted themselves well. Kankowski, who has so often been derided for not playing tight enough and who has played second fiddle to Pierre Spies, enhanced his reputation with solid play and some good runs. If only he had looked left instead of right during a rare Springbok breakthrough, and offloaded to the two runners outside him, the game might’ve turned out differently.

After the get-out-of-jail wins against Ireland and Scotland, it almost felt as if the rugby gods had given the Springboks a fillip. But, like most of this year, the Boks failed to play like world champions and lost to the weakest of the home nations side.

England, the toughest side, is next; but the Springboks’ reputation – like the Grand Slam – lies in tatters. Get used to the feeling. With the tactically naïve P.Divvy in charge, a man who steadfastly refuses to learn from his mistakes, we’ll be feeling it again at next year’s World Cup. DM

Main Photo: The Springboks lost to Scotland 21-17 at Murrayfield on Sauturday. Reuters