Anglo American’s PR campaign: not quite the full story 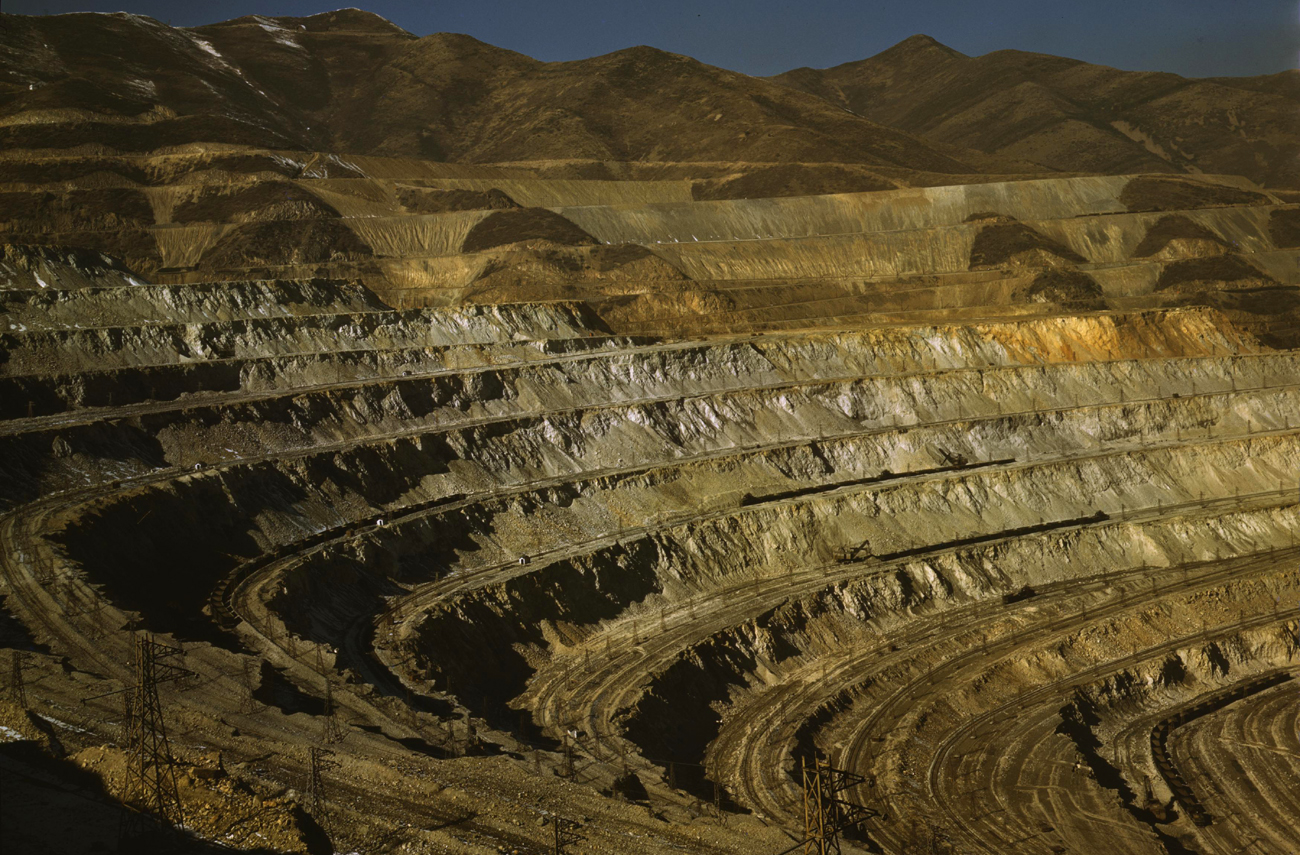 Recently, London-listed mining giant Anglo American embarked on a full-scale advertising campaign to show the world how much good it does in the communities in which it operates. The adverts, which appear under the slogans “Get the full story” and “Mining our way”, come across as moving and persuasive. But could the timing of the campaign have anything to do with a giant open pit mine Anglo plans to dig in the planet’s most important wild salmon fishing grounds? By KEVIN BLOOM.

The largest open-pit mine in North America is currently the Bingham Canyon copper mine in Utah, which to date has mined more than 8 billion tons of material. If you’re so inclined you can plan a field-trip to the site, where guides will tell you that two Sears Tower Buildings stacked on top of each other would not reach the lip of the pit, and that 12 aircraft carrier Enterprises laid out end to end would just about cover its width. You might also be told that the mine, owned by Kennecott Utah Copper, a division of Rio Tinto, has produced more copper than any other mine in history (the exact tonnage, after the processing of the ore, is 18.7 million), or that “a king-sized mine needs king-sized equipment” (like those ten giant automated shovels, the largest of which can scoop the equivalent of 50 motorcars in a single bite). Maybe, taking all of this in, you’d ask a question about the environmental impact of the operation, in which case the guides would be ready for you: “Engaging in environmental stewardship is a central component of Kennecott Utah Copper’s sustainable development commitment,” you’d hear. “We set self-imposed environmental targets to drive continual improvement.”

Anglo American, which is keen on digging a pit in Alaska even bigger than the pit dug by their competitors in Utah, might get the thinness of such statements better than anybody. Because its plan for dealing with difficult questions appears to be a full-scale cross-media global advertising campaign – one that employs the slogan and the web address “Get the full story”; one that delivers stirring and apparently honest narratives about how communities across the world have benefited from their mines; one that promises to “share value, from shared values” instead of providing reams of contested data on legacy clean-up issues, air quality, and water and waste management.

Thing is, though, that the Ernest Oppenheimer-founded, LSE-listed conglomerate has a lot more to deal with than a few irritating questions from wide-eyed tourists and marginalised lobby groups. In December, National Geographic magazine will run an in-depth feature and photo essay on the controversy over what’s known as “Pebble Mine” (in full, the Pebble Limited Partnership; a collaboration between Anglo American PLC and Northern Dynasty Minerals). A major source for the story will no doubt be the community of Bristol Bay, Alaska, who overwhelmingly oppose the digging of the pit for the following reasons: it will generate as much as 10 billion tons of mine waste, which will be stored forever behind large dams at the headwaters of Bristol Bay; the mine site is located exactly where the largest remaining wild sockeye salmon fishery in the world makes its home; salmon are highly sensitive to pollution, and even the smallest environmental interference will impair their ability to find spawning grounds and locate predators; the site is an active seismic zone, prone to frequent earthquakes; the type of rock at the site is considered “reactive” and is thus a high risk for metals and acid pollution; 160 billion litres of water will need to be drawn from surrounding streams to run the project.

In exchange, Anglo American will get a lot of copper, gold and molybdenum, along with smaller yields of silver, palladium and rhenium. But it hasn’t always looked likely that the company would go ahead with the project. As Anglo CEO Cynthia Carroll said at a Resource Development Council luncheon in Anchorage, in late 2007: “We do not want to and will not be associated with the development of a mine that damages Alaska’s fisheries and wildlife, or the livelihoods of Alaskan communities. If the mine cannot be planned in a way that provides proper protections, it should not be built.” The sentiment was repeated by Carroll in 2008, in an interview with Fast Company: “I will not go where people don’t want us. I just won’t. We’ve got enough on our plate without having communities against us.” And again by Anglo chairman Mark Moody-Stuart, who told Mining Weekly in 2009: “Our bottom line is that, if the project cannot be built in a way that avoids damage to Alaska’s fisheries and wildlife or to the livelihoods of Alaskan communities, it should not be built.”

As the months have passed, however, the Pebble Mine has started to look more and more like a fait accompli. Moody-Stuart visited the region for the first time in March 2009, essentially to meet the community and listen to their concerns. He was greeted by a throng of protesters, and seemed to disappoint locals with the following answer to many of their questions – “We’ll get back to you.” Asked during the visit by the Anchorage Daily News whether Anglo had ever stepped back from a mine project due to controversy or environmental problems, he said: “The example I would use of Anglo’s willingness to step away from something is in the safety area. Because of poor performance, Anglo chief executive Cynthia Carroll shut a mine down for a period of time while we retrained the people. It probably cost us 15,000 ounces of platinum production (worth roughly $20 million, at the time). Part of the signal we gave there is that … safety will not be compromised.” Perhaps a little evasive?

Watch the trailer to Red Gold, a documentary about the Bristol Bay community and its opposition to the Pebble Mine development.

Then, in April 2010, Bristol Bay community leaders travelled to London to attend the Anglo American annual meeting and urge the company to reconsider. Once more the official line from Anglo was that Pebble Mine was just an exploration project, and that nothing would happen unless and until safety and environmental concerns were addressed. Later in 2010, adverts began to appear in the UK Guardian, Economist and at Heathrow Airport, publicising the benefits that Anglo’s mines bring to local communities. The campaign ran under the slogan “Mining our way”, and is almost certainly connected to the “Get the full story” message that’s recently cropped up on Anglo’s new website.

The “full story”, from Anglo’s perspective, is a moving one. The website provides narratives from five of the countries in which the company operates – South Africa, Australia, Chile, Brazil and Peru – and each story is impressively poignant. Individual miners are named as recipients of progressive policies, like this one in South Africa: “Besides creating the largest HIV/AIDS workplace prevention, counselling, testing and treatment programme in the world, Anglo American was also the first major employer in Southern Africa to provide free anti-retroviral treatment (ART) to all its employees.” Or this one in Chile: “In 2004, when we found out that many young high school graduates in the Los Bronces area were dropping out of higher education – unable to continue their studies due to financial and family difficulties – we set about finding a solution. By supporting the local technical colleges, we’ve improved facilities and training courses in several Chilean towns, making education a feasible – and attractive – choice for young people.”

But if the advertising campaign is a direct response to the publicity fallout over Pebble Mine – and given the timing of it, with the National Geographic article due to appear in a matter of weeks, there’s every reason to believe that it is – the Bristol Bay residents aren’t buying. On 4 November they took out their own full-page advert in CityAM, with these words on top: “Anglo American’s CEO promised: ‘We won’t dig a gold mine where we’re not welcome.’ Our people say: ‘You’re not welcome.’” The advert goes on to state that 80% of the people of Bristol Bay don’t want the mine, and that 50 leading jewellers have pledged not to buy the gold it yields.

This last fact is there in plain view on a website called “No Dirty Gold” (which has the payoff line, “The more you know, the less the gold glows”) and signatories include Tiffany & Co, Goldsmiths, Fortunoff, Watches of Switzerland, and Beaverbrooks. The UK human rights news site OneWorld provides a succinct explanation of why the anti-Pebble Mine movement might be receiving such illustrious support: “The Bristol Bay salmon fishery supplies a third of the world’s commercial supply of wild sockeye salmon. It is the lifeblood of many Alaska Native communities and is critical to the state’s economy, generating an average of $400 million a year and over 5,500 jobs.”

Is the full story really that Anglo American cares about the communities in which it operates? Not if they dig a giant hole in Alaska. DM

Main photo: The Kennecott Copper Company’s open-pit mine workings at Bingham Canyon, Utah. The mine is currently the largest open-pit mine in the world. Photo: Andreas Feininger, licenced by Wikimedia Commons.