Publishing industry sea-change, brought to you by James...

Publishing industry sea-change, brought to you by James Frey 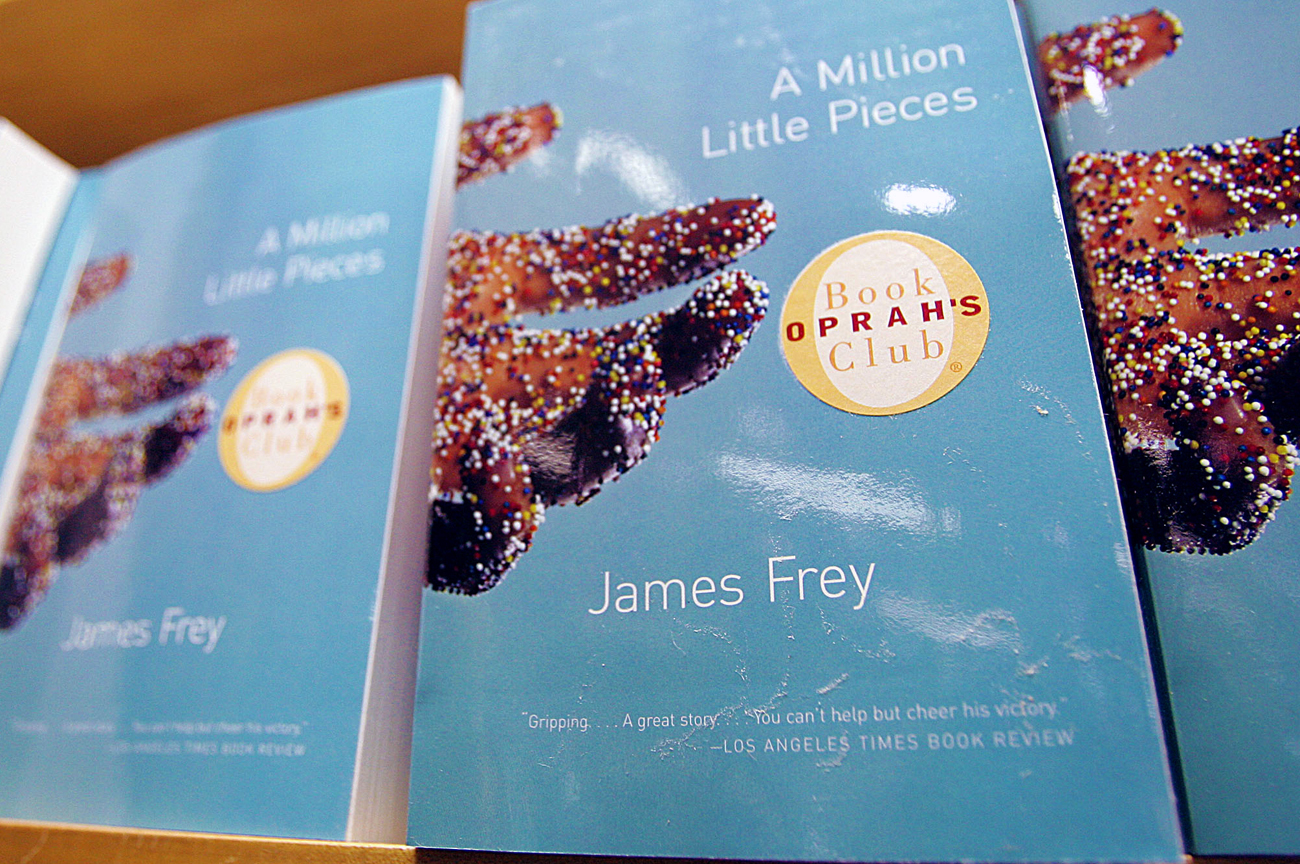 James Frey, the author of A Million Little Pieces who was eviscerated on Oprah for being a liar, hasn’t been hiding out in purgatory for the last four years. Far from it – he’s been reinventing himself as a major voice in contemporary fiction. And now he has an idea that may just change book publishing as we know it. By KEVIN BLOOM.

“Full Fathom Five” are the famous opening words of a song sung by the angel Ariel in William Shakespeare’s The Tempest. The first six lines, for context, are “Full fathom five thy father lies; Of his bones are coral made; Those are pearls that were in his eyes; Nothing of him doth fade; But doth suffer a sea-change/ Into something rich and strange.” The opening phrase has been used as a title of a track by The Stone Roses; as the title of a painting by Jackson Pollock; in a 1958 poem by Sylvia Plath; and on the 1965 Marianne Faithful album “Come My Way”. Recently, the writer James Frey – author of A Million Little Pieces, which was marketed by Oprah as a non-fiction memoir and scandalously turned out not to be – launched his own publishing company under the name Full Fathom Five. He expects, as it says in the Shakespearean song’s fifth line, that it will deliver to the book world a sea-change.

An article published in New York magazine on 12 November describes Frey talking about his craft, before pitching the idea behind the company to a small group of students in the graduate writing program at Columbia:

“Frey delivered his opinions on the memoir genre (‘bunk,’ ‘bullshit,’ a marketing tool that didn’t exist until several decades ago); fact and fiction (there’s no difference); truth (it doesn’t exist, at least not in the journalistic sense); Europe (where he turns for validation); America (which is obsessed with honesty and raises people up only to tear them down); the best writers (Mailer, Vonnegut, Hemingway, Baudelaire, Henry Miller, Cormac McCarthy); documentary (‘a thesis on truth that hasn’t been proven yet’); Oprah (‘I should have never fucking apologized’); the kind of writer he wants to be (the most controversial and widely read of his time); making literary history (he’s in it to ‘change the game’ and ‘move the paradigm’; he won’t write anything that doesn’t change the world); self-editing (a trap for young writers); mistakes (part of the spontaneity of a work of art); and, most important, how to write (‘don’t give a fuck’; sit for ten hours a day, 600 days in a row; ‘write what you want to write, and make sure there is one hell of a disclaimer at the beginning’).”

Which are all quite clearly the words of a man uncowed by the experience of being humiliated before millions by the queen of American TV talk. It was so bad, in fact, that after Winfrey called Frey a liar in early 2006, mainstream media couldn’t stop celebrating – as evidenced by these words of Maureen Dowd in the New York Times: “It was a huge relief, after our long national slide into untruth and no consequences, into Swift boating and swift bucks, into W.’s delusion and denial, to see the Empress of Empathy icily hold someone accountable for lying.” And yet Frey just seemed to draw energy from this most public of eviscerations as the years progressed – A Million Little Pieces, instead of being pulled by Doubleday and Anchor Books, was reprinted with a disclaimer and continues to sell brilliantly worldwide; My Friend Leonard, the follow-up to A Million Little Pieces, followed up too on the first book’s enduring success; a subsequent novel, Bright Shiny Morning, got rave reviews and similarly satisfying sales. As of today, Frey’s books have been translated into over 30 languages and his friends include Salman Rushdie and Larry Gagosian, one of the world’s most renowned art dealers. He has also reportedly teamed up with Mark Wahlberg, executive producer of the hit TV series Entourage, to write a one-hour pilot drama for HBO on the Los Angeles porn industry.

So the sea-change he plans to institute in the publishing industry may be just that: a morphing of the status-quo “into something rich and strange”.  The idea behind Full Fathom Five, which he pitched to students at Columbia as well as to students in MFA courses across the US, is the creation of a “fiction factory” where Frey collaborates with aspiring writers on various projects in the young adult genre. The terms of the contracts these unknown authors are being asked to sign are brutal – Frey owns all the copyright, a co-credit on the jacket is at his sole discretion, and co-authors receive pitiful advances – but they nonetheless seem to be sending through proposals in numbers. One reason may the success of the first book put out by Full Fathom Five, I Am Number Four, the result of a collaboration between Frey and one Jobie Hughes that was released under the pseudonym Pittacus Lore.

Notes the New York magazine article: “In June 2009, a bidding war ignited for the film rights, between J. J. Abrams and a joint proposal from Steven Spielberg and Michael Bay. Spielberg and Bay won, for a reported high-six-figure deal. This, in turn, sparked publishing interest, and HarperCollins won the book rights. Together, Frey and Hughes signed a four-book deal. Rights to I Am Number Four have since been sold in 44 countries, and, at last count, has been translated into 21 languages.”

Before collaborating with Frey, Hughes was a poor student at Columbia (“a welfare kid who came from nothing”) in deep debt. His rags-to-riches story seems to have inspired intense interest from graduate students, who are in college to learn how to write the opposite of genre fiction, and who’re signing with Frey despite some of the vicious terms (the penalty for publicly admitting to working with Full Fathom Five without permission is $50,000). The attraction of being published and working off tuition loans in one fell swoop is, apparently, stronger than the attraction of remaining committed to the purist school of literature.

But what exactly is the sea-change that the fiction factory promises as a concept? This isn’t the first time a famous author has leveraged his own brand and literary contacts by sub-contracting out to wannabes; James Patterson, the world’s best-selling thriller writer, does it all the time. And yet the difference with Frey could be this: he’s modeling Five Fathoms Deep on Damien Hirst’s art factory, “a warehouse in which a reported 120 employees work to create fine art signed by Hirst.” It’s something that hasn’t really been seen in publishing before, especially when one considers the incentives involved.

“Generally,” observes New York magazine, “a book packager conceives an idea, hires writers to generate the content, and sells the package to a publishing house, much like a film-production company selling a project to a studio. The book packager’s writer will sometimes share in the revenue but usually just take a standard fee, to the tune of $10,000. Frey seemed to think that writers who had a bigger share in the profits would deliver better books.” DM

Photo: Copies of James Frey’s “A Million Little Pieces” are put on display in a bookstore in New York January 9, 2006. Frey’s memoir of alcohol and drug-induced mayhem sold 1.77 million copies last year after being chosen by Oprah Winfrey’s book club in September, but one investigative Web site now says his book was based on lies. The book’s publisher, Random House’s Doubleday division, stood by the author and declined to make Frey available for interview. But on his personal Web site, bigjimindustries.com, he called the article “the latest attempt to discredit me.” REUTERS/Seth Wenig.