The art of science in the small 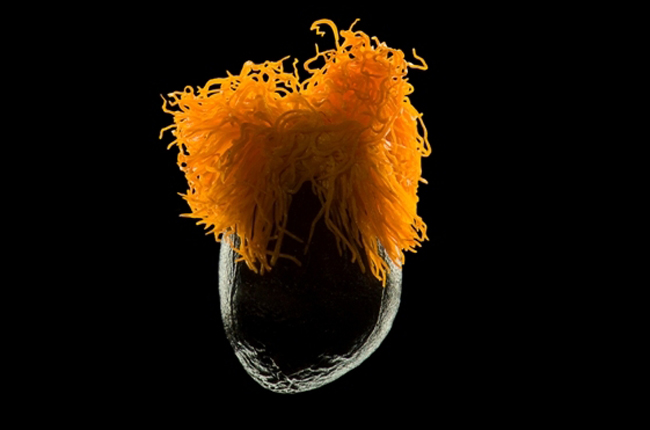 They’d look perfectly at home at New York’s Guggenheim Museum for Modern and Contemporary International Art, but, although the work’s aesthetic, its inspiration is scientific rather than creative. The extraordinary curves, colours and fusion of textures in these pictures were created by nature, decoded by science and photographed using extreme magnification. And, they’re no less beautiful than any art. By MANDY DE WAAL.

What does the world look like up close? Magnified tens or hundreds of times? The answer, which can be found by looking at the winners of the 2010 Nikon Small World Photomicrography Competition, shows it is breathtakingly beautiful. Just as the Hubble Telescope produces spectacular images of distant galaxies, nebulae and quasars, looking extremely closely at familiar object produces alluring revelations.

What looks like luminescent green strands and spiralling fibres set against a charcoal background studded with brilliant blue is in fact the close up of a mosquito’s heart and the winner of 2010’s Nikon Small World competition. The photograph of the anopheles gambiae (mosquito heart) was taken by Jonas King from Nashville and magnified 100 times using fluorescence technology.

Aside from being visually captivating, the image is scientifically significant and is part of King’s research into how those irritating insects carry and transmit pathogens including malaria. A disease that kills up to 3 million people a year, 90% of malaria deaths happen in sub-Saharan Africa. Mosquitoes remain one of the greatest scourges of mankind and this image of the mosquito heart helps us understand how they transport nutrients, hormones, and even pathogens such as malaria throughout their bodies,” said King, a researcher at the Department of Biological Sciences at Vanderbilt University in Nashville, Tennessee. “I’m happy that such an important and aesthetically pleasing image was selected as the winner.” Photo: Hideo Otsuna of the University of Utah Medical Center used an interactive rendering tool for confocal microscopy data visualization was used to take this photograph of a five-day-old zebrafish head.

Second place in the competition went to a postdoctoral research fellow at the University of Utah’s Neurobiology and Anatomy Department, Hideo Otsuna, whose research focuses on neuro-anatomy of drosophila and zebrafish. Ostsuna creates accurate three-dimensional and four-dimensional reconstructions of the organisms. The scientist’s winning image was of a five-day old zebrafish head magnified 20 times. Extreme close ups of zebrafish took third place, but this microphotograph sought to expose the complex processes that shape and change the developing and mature brain in the fish. A microphotograph of a zebrafish’s olfactory bulbs magnified 250 times secured Oliver Braubach of Dalhousie University in Canada a place in the top five. The Nikon Small World, one of the oldest and most respected awards of its kind, celebrates the world’s best photomicrographers who create beauty while demonstrating scientific discipline. DM

Read more: Life through a high powered lens: the Nikon Small World awards in Guardian, Time For Your Close-Up: Science Meets Art In Photomicrography at NPR, Photos Show Beauty Lurking Under the Microscope at SpiegelOnline.