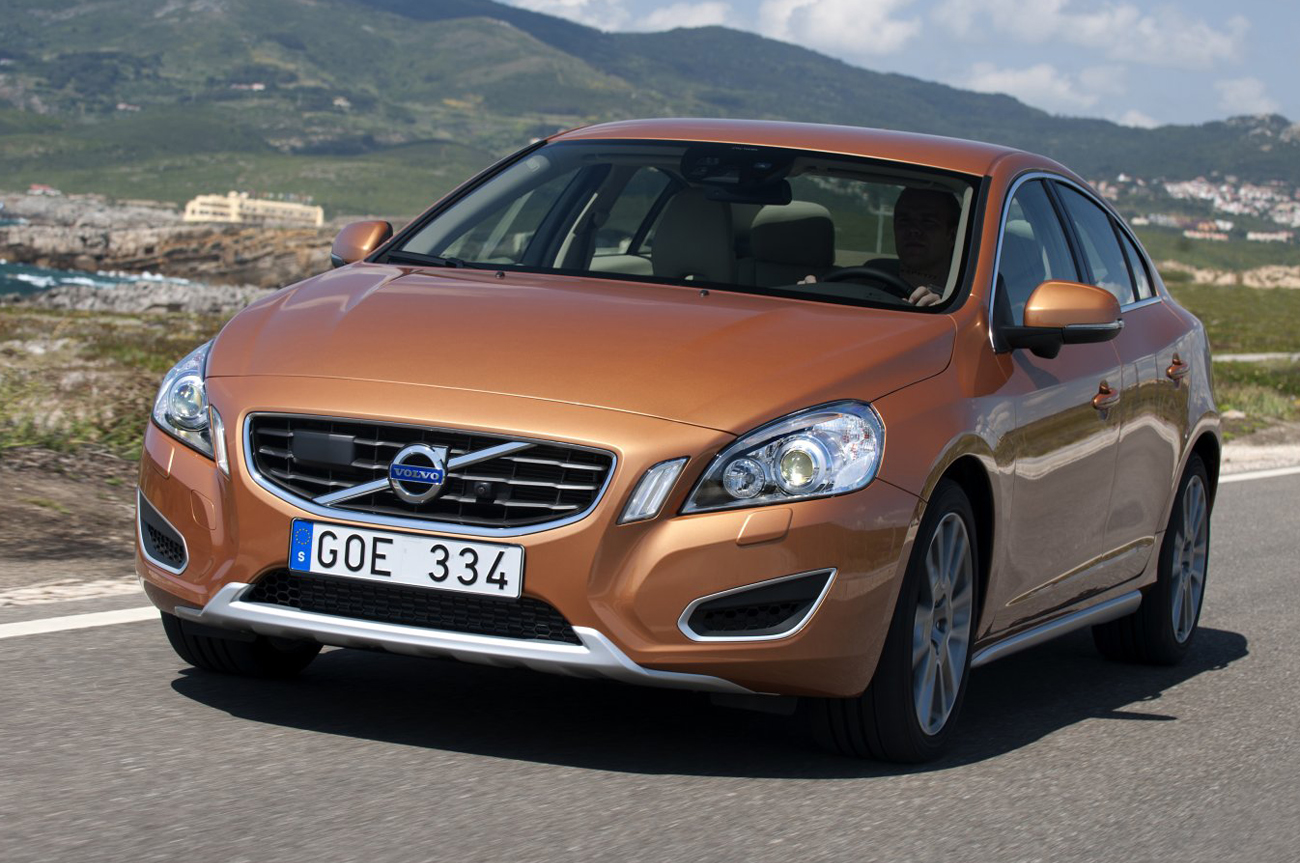 There was a time when Sweden’s most famous – and sexiest – export was film star Britt Ekland, who kept James Bond smiling in “The Man With the Golden Gun”. Today, the minimalist, flat-pack furniture of stylish home store IKEA is arguably a more compelling Swedish export. Of course, there’s also Volvo: always safe, but never sexy. The arrival of the new S60 sedan may well change that perception. By DEON SCHOEMAN.

It’s hard to picture Volvo in Chinese hands. The brand has been the epitome of Swedishness for so long that it has become a compelling symbol of that nation: stylish, elegant, minimalist – and just a bit dour.

Just what impact Chinese ownership will have on Volvo remains to be seen. If anything, it will be in the interests of new owner Geely to retain as much of the considerable technological expertise. After all, one suspects that the transaction had more to do with transfer of technology than brand equity.

But let’s be fair; today’s Volvos are a far cry from the brick-and-breadvan-styled machines of a few decades ago. The current crop are generally sleek and stylish, with just enough design individuality to ensure instant recognition – which is more than can be said of many, more generic brands.

The current S40 boasts a fresh, contemporary design, with powerfully sculpted shapes and contours. The C30 is a cheeky, slightly off-beat hatchback. And the XC60 proves that even SUVs can exude a dynamic and elegant presence. No surprise then that the new S60, launched with great fanfare in South Africa last week, shows a more daring face we’ve come to expect of Volvo’s midsized sedan. From the front, the nose looks almost predatory, with a hungry grille and wide-staring headlights.

The steeply raked windscreen, a smoothly arced roofline and a high waistline all suggest decent, wind-cheating aerodynamics and a certain propensity for dynamic talents. For us, the only let-down is the rear, which seems a little soft and droopy from some angles.

The wheels are set quite far apart, suggesting a long wheelbase, while the wide front and rear track create a sense of planted confidence that contributes to the S60’s overall presence and aesthetic integrity. Put it this way: There’s enough that’s handsome here to attract attention, while remaining instantly recognisable as a Volvo. The result is often a look of surprise – as if those who spot the car can’t believe that Volvo could build something as head-turning as this car.

But, as they say in the classics, don’t judge a book by its cover. More importantly, don’t judge a car by its sheet metal. What really matters is what’s underneath that crisply rendered shape.

Let’s start with a cockpit that will feel instantly familiar to anyone exposed to current-generation Volvos. Which means its slickly executed, with lots of expensive looking surfaces, nicely contoured seats, and switchgear that’s comprehensive without becoming intimidating.

However, there’s not much to distinguish this latest, cutting-edge S60 from, say, the S40, except for the extra space. So, from the inside, the S60 feels like a bigger S40. That’s not necessarily a bad thing, but given that most owners will spend much of their time perched inside the S60, the generic approach to cabin styling and layout represents a missed opportunity.

At least the bucket seats are nicely sculpted, the bench seat is more supportive than you’d expect, and there’s plenty of air. The floating centre console, a Volvo trademark first introduced in the S40, is a feature here, too.

Standard equipment is comprehensive across the board, with all the mod-cons one could wish for. The top T6 model under scrutiny here gets niceties such as a split-screen forward camera, electric everything, remote central locking, decent multi-speaker audio and  more.

But it’s the arsenal of safety systems that will have traditional Volvo fans drooling. All the usual stuff is there – latest-generation ABS brakes, advanced stability control, a full house of airbags, and inertia-reel seatbelts. That’s only the start, however. More telling is the standard pedestrian detection system, which not only will sense a pedestrian straying into the path of the S60, but will also apply the brakes if the driver doesn’t react.

Similarly, City Safe keeps tabs on traffic ahead of the S60, and will brake automatically if the car in front slows down, or stops – at speeds of up to 30km/h.

Attractive, comfortable and safe: those three attributes are considered mandatory in the premium sector. And the S60 ticks all three boxes convincingly. However, what about its dynamic capabilities?

The local S60 model array comprises three engine choices, of which the range-topping T6 we’re testing here is the most powerful by some margin. The 3,0-litre six-cylinder turbo unit is transversely mounted, and delivers a healthy harvest of power and torque.

Even more interesting, however, is that the 224kW of maximum muscle, and the 440Nm of twist, is delivered to all four wheels. Quattro-spoilt Audi owners may consider all-wheel drive old hat, but it’s still a relative rarity in the premium passenger car segment.

As expected, it adds greater traction and stability in most driving conditions – from allowing rapid, fuss-free starts to keeping things tidy through the twisties. A centre diff allows the front/rear torque split to be varied, while torque vectoring makes the most of the available traction and combats understeer. The result feels astonishingly like driving on rails. Or, to be more precise, the S60 T6 has a nicely weighted, balanced attitude that encourages high entry speeds into corners. In fact, it’s all too easy to underestimate the speed you’re travelling at in this Swede.

There’s plenty of grip on exiting, and none of the squirmy torque steer that used to routinely plague 200kW-plus cars when applying too much welly too early. Of course, the all-wheel drive’s extra traction and torque distribution make all the difference here, but the steering’s precision plays a big role, too.

In local spec, the S60 gets Volvo’s so-called dynamic chassis, which is effectively what others would call a sport set-up: Stiffer springs, uprated dampers, thicker anti-roll bars and upgraded bushes all combined for a ride that is taut on good surfaces, and a little bumpy on lesser roads.

Run-flat tyres don’t help the comfort cause, either. But in our opinion, the slightly harder ride is more than compensated for by the additional composure it allows when pressing on. It adds to a personality that’s far more sporty than expected. The performance figures vindicate that impression: the zero-to-100km/h dash will stop the clocks after exactly 6,5 seconds, while top speed is governed to 250km/h. Big disc brakes on all four corners allow drama-free stopping power.

So, does the new Volvo S60 get our vote? Is it radical enough to persuade premium car buyers to consider a move to the Swedish brand? Yes and no.

The sedan’s sleek lines, its spacious interior and the brio of its turbo six make it a more athletic, more dynamically satisfying car than its predecessor. There’s luxury in abundance too. And let’s not forget the arsenal of safety gear, making the S60 a reassuring travel companion.

That said, the likes of Audi and BMW are more polished than the Volvo, and also command greater aspirational appeal – something that Volvo still needs to earn.

At the very least, however, the S60 proves the Swedes are moving up the automotive ladder. Soon, cars like the S60 will not only be competent, safe and technologically advanced, but sexy and desirable too. Like Britt Ekland … DM

The Volvo S60 T6 AWD is one of the vehicles  featured in this week’s episode of the RPM TV motoring show. Check www.rpmtv.co.za for transmission times.