Ask(Jeeves).com and its impending doom

Ask(Jeeves).com and its impending doom 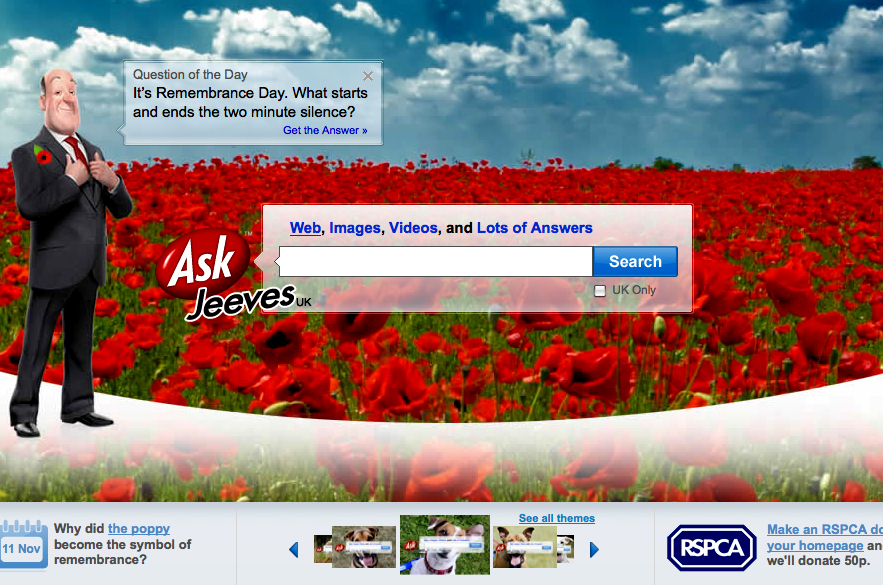 In PG Wodehouse's Jeeves and Wooster stories, the “gentleman's personal gentleman” could always be counted on to save the day. However, even the inimitable Jeeves is no match for the monolith that is Google. On Tuesday, Ask.com announced it was closing down the search engine side of business, and returning to a Q&A-style service. The question it can't yet answer is: Will it work? By THERESA MALLINSON.

One of the many great things about the fictional Jeeves is that, as a reader, you always knew where you stood with him. Jeeves’ role is to rescue Bertie Wooster from his latest scrape – whether this involves the dispatching of a nasty hangover or extricating him from his latest inadvertent engagement. In this part, Jeeves is both unflappable and utterly dependable.

The same cannot be said of his search engine namesake – previously AskJeeves.com. As company president Douglas Leeds said in a blog post on Tuesday: “Ask has taken a lot of flak through the years, fairly and unfairly, for not having a focused, cohesive strategy, for ping-ponging across different approaches and marketing tactics”, which pretty much sums up the company’s chequered progress.

AskJeeves.com was launched in 1996 and the original idea was that Jeeves, the fictional valet, would transmogrify into a sort of digital butler, scurrying off to hunt down answers in the virtual world. The search engine attempted to differentiate itself from the market by answering questions framed in natural language, as well as keyword searches. In what now seems an oddly quaint practice, it also used human editors, in addition to algorithms, to compile its answers. But it’s a return to its original human-filtered answers that Ask.com is now counting on to revive its brand.

Unlike Jeeves, the valet, AskJeeves.com seems to be in a perennial identity crisis, never quite certain what its core role should be. In 2001, AskJeeves.com joined the big-league algorithm game, when the company purchased Teoma, a search engine that, like Google, had its origins in a research paper. While Google’s PageRank system basically ranks sites according to how often they are linked to, Teoma refines this practice, by ranking sites according to how often they are linked to by other sites that focus on similar subject matter. AskJeeves.com snapped up Teoma for a mere $4.4 million, but by this stage Google had already captured the Internet-searching public’s imagination, and poor Jeeves could never quite catch up. However, the acquisition of Teoma meant that, until Tuesday, AskJeeves.com was the only pre-Google search engine to have survived the latter’s entrance to the market.

In 2005, InterActiveCorp bought Ask Jeeves for $1.85 billion, with a plan to turn it into a genuine competitor to Google. But once  again, the rebranded Ask.com, never really took off. On 9 November, Leeds announced it would be closing down its offices in New Jersey and Hangzhou, China, retrenching 130 staff in the process. Ask.com will also opt out of the search engine game, with its search engine results being sourced from “one of its competitors”, widely believed to be Google.

The exact search engine market share stats vary depending on who’s doing the counting, but globally more than 85% of people use Google and less than 1% go to Ask.com. In the US, according to Nielsen, those figures are 65% and 2% respectively. Despite its decision to close down, Ask.com’s latest financials have shown its search business is growing. InterActiveCorp reported search revenue of $205.1 million (an increase of 20%), with operating income leaping 43% to $29.8 million. However, since most of this growth is in the Ask toolbar, rather than the search engine, the latter’s scrapping is not a surprising move.

What this means is, yet again, Google’s killed off another competitor. “Don’t be evil,” indeed. The Internet search business is pretty much like a democracy where one party has an overwhelming majority (no countries mentioned); Microsoft’s Bing is the official opposition, but it doesn’t seem to have a chance of winning power in the foreseeable future.

Ask.com, however, is looking at other avenues for growth. The company is far from a small player and, according to Compete.com, still the sixth-biggest web property in the world. Leeds told CNN Money in July that 30% of the site’s traffic is derived from people asking questions. The assumption is if people can’t find the information they want through Google, their next stop is Ask.com , where they can pose a full, direct question. Leeds admitted in his blog post that “the execution of our Q&A strategy still requires a great deal of technology investment and technical innovation”, but feels that an absolute focus will help the company “continue to make the technology investments necessary across all of these fronts to develop the very best Q&A experience on the web”.

It’s a mug’s game predicting the future of Internet companies, so rather than do it ourselves, we thought we’d turn to Jeeves. (You can still ask the valet a question if you go to the UK iteration of the site.) “What is the future of Ask.com?” we typed in. Perhaps it’s an unfair question. Even so, it says something that this query hasn’t yet been indexed as one of Ask’s community-answered questions. And if you ask Jeeves to trawl the web for an answer, the first result he comes up with dates from 2007. Once again, it seems that Ask.com has a lot of catching up to do. DM