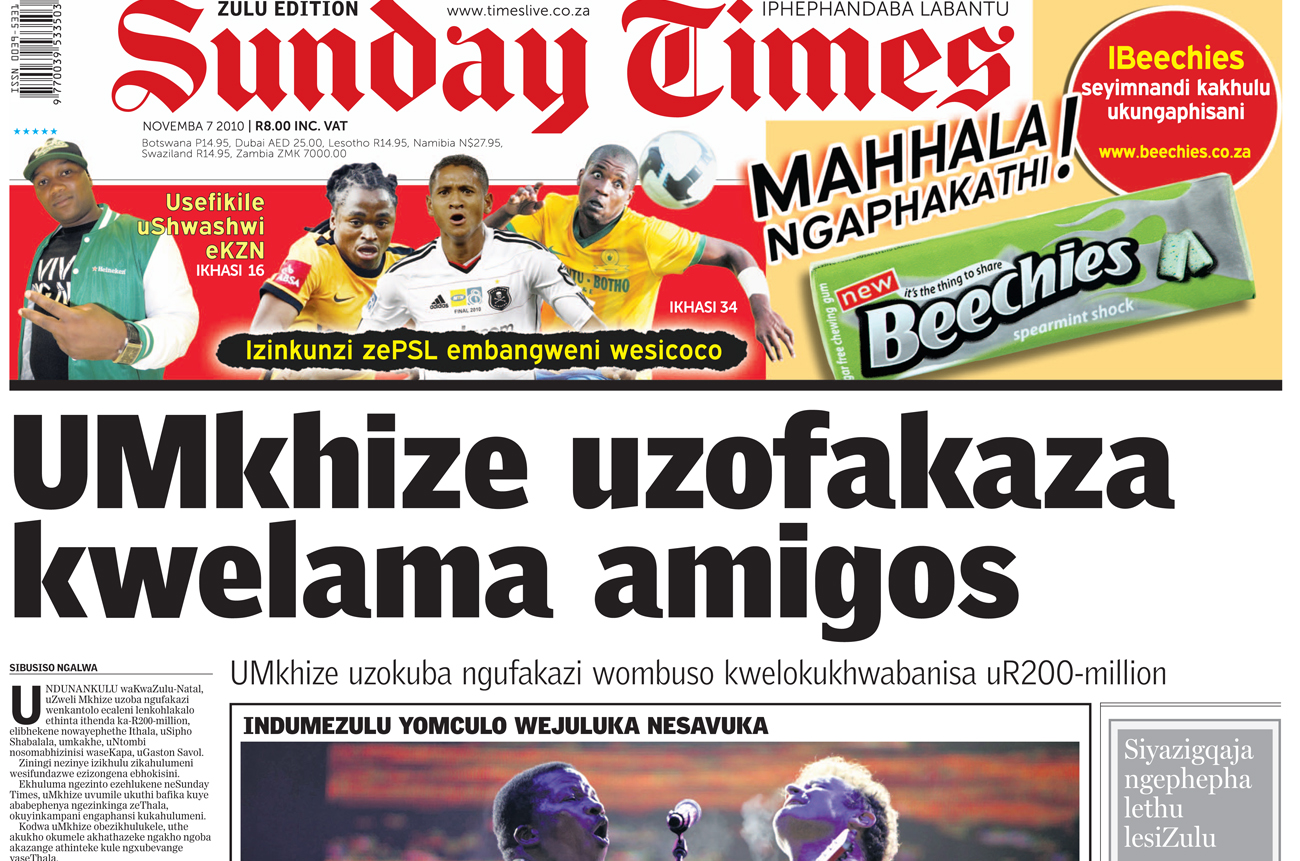 For the benefit of you counter-revolutionaries who can’t read isiZulu, we shall carry on in English.

One of the many complaints at the debates and panel discussions that emerged in the wake of the proposal for a statutory media appeals tribunal was the fact that the big newspapers do not service a large chunk of the population. By printing their titles exclusively in English or Afrikaans, they leave out those who can only read indigenous African languages.

One newspaper has taken steps to rectify this, perhaps not entirely because of the threat of a media appeals tribunal, and as of 7 November 2010, a Zulu edition of the Sunday Times went on sale in KwaZulu-Natal.

For all the ANC’s finger-wagging about African-language newspapers, publishing in indigenous languages is a perilous task. For all the big numbers involved (we’re talking circulation in the region of hundreds of thousands in KZN alone), the business has been protected all along by the fact that languages like isiZulu were simply ignored by the big publishers, leaving the few vernacular titles to divide readership among themselves. The telling thing about the market is the content of Isolezwe and iLanga. It’s tabloid journalism. It’s very local, it’s very Zulu, but it’s still tabloid reporting. Critical, quality, investigative journalism costs money.

The Sunday Times must be commended for making the leap into the isiZulu newspaper business. Its presence will raise the bar for competitor titles (mainly Isolezwe and iLanga), which can only be good for journalism. The logistical impetus necessary to launch such a paper is no small undertaking, and we take our hats off to the Sunday Times.

The Sunday Times will have its work cut out. The market is dominated by two titans, the 107-year-old iLanga and Independent Newspaper’s Isolezwe, founded in 2002. Isolezwe’s Sunday edition has a circulation of roughly 71,000 and the Sunday edition of iLanga is distributed to about 82,000 readers. The isiZulu edition of the Sunday Times only brought out 10,000 copies in its first issue, according to Bizcommunity’s Gill Moodie.

The first 10 or so pages are where the isiZulu Sunday Times can really make a difference. The market desperately needs hard-hitting investigative journalism, and the ST’s intentions are already evident in the first issue, with stories about John Block’s corruption, the arms deal and the high rate of failures in Further Education and Training colleges, among others.

Sunday Times editor Ray Hartley was quoted in Bizcommunity saying, “…the Sunday Times is not competing with Ilanga or Isolezwe because it cannot produce local KZN news to the same degree and, therefore, the isiZulu edition – which is a condensed version of the paper – will remain national in flavour.”

However, there are one or two issues with the isiZulu edition of the Sunday Times which will hopefully be ironed out soon (it is a newly launched paper, after all).

Initially the paper will be distributed in KwaZulu-Natal and, despite what the clichés would have us believe, the Zulu nation is not one, homogenous group of tyre-burners and beer-guzzlers, who all want the same things in a paper. For one thing, most of the stories and features are literal translations of the English Sunday Times. Do the tastes, cultural nuances and interests translate that easily? We don’t think so. If I’m reading the Sunday Times in isiZulu, and find resonance with what Nechama Brodie or Barry Ronge have to say, then I’m probably more adept with English than isiZulu, which means that I’d read the English edition anyway. The underlying assumption is that merely translating the English paper into isiZulu will bring in the readers. That strategy will only take them so far.

And why are most of the ads in English? You’d think the advertisers, what with their LSM charts and market research, would know their target market better. It’s difficult to work out exactly which segment of the isiZulu-speaking demographic the paper is trying to attract. It seems the paper itself isn’t sure, and I sympathise. It’s going to be very difficult to place itself above titles such as Isolezwe in the market, without aiming so high that it’s effectively competing for readers who’d prefer to read their Sunday paper in English, despite speaking isiZulu.

The minds and hearts of the publishers of the isiZulu Sunday Times are in the right place, but it will take a little more investment in isiZulu writers and journalists (as opposed to translators) to make this project a success. DM