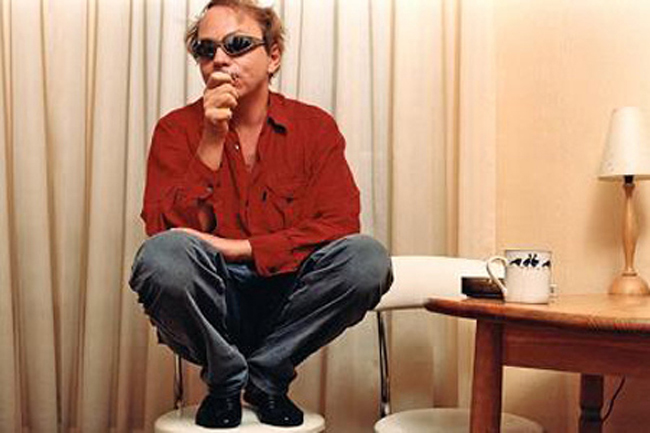 Michel Houellebecq, the enfant terrible of French letters, has articulated a vision in his five novels of a world peopled by bored and depressed “children,” characters with no emotional maturity who’re acted upon by the arbitrary forces of sex and money. Critics have called him a vulgar pornographer; fans have founded the “depressionist” movement in his honour. Now, after years of being ignored, he’s won France’s most coveted literary prize. Is he happy? By KEVIN BLOOM.

The word “whatever”. Disaffection, nihilism, boredom, exhaustion, millennial gloom, the soul of man under late capitalism, the irrelevance of love, post-Christian despair – said right, the word evokes them all. As a noun, the synonym is “accidie,” a derivative of the demon Acedia, who’d attack 15th century monks in the heat of the day, making them heavy, paralysing their will, sinking them into disgust and bleak unbelief. Accidie, as far as the monks were concerned, was a deadly sin; its effects were idleness, tardiness, coldness, and its punishment was an everlasting home in the fifth circle of the inferno, from where the sobs of the damned would bubble to the surface. But that was then, in the Middle Ages, when God existed. Now, it’s just whatever.

More than any other writer or thinker, Michel Houellebecq defined the term – and its link with history – in his debut novel Extension du domaine de la lutte, published in French in 1994. Literally translated as “broadening the field of struggle,” the book was released in English under the title (what else?) Whatever. As it had in France, it became a cult classic in the English-speaking world: critics wanted to vomit and fans read it as scripture. The book’s opening paragraph laid it down without apology or nuance:

“Friday evening I was invited to a party at a colleague from work’s house. There were thirty-odd of us, all middle management aged between twenty-five and forty. At a certain moment some stupid bitch started removing her clothes. She took off her T-shirt, then her bra, then her skirt, and as she did she pulled the most incredible faces. She twirled around in her skimpy panties for a few seconds more and then, not knowing what else to do, began getting dressed again. She’s a girl, what’s more, who doesn’t sleep with anyone. Which only underlines the absurdity of her behaviour.”

And so it goes for 155 pages, the protagonist, a computer programmer, punctuating his revulsion at human contact with thoughts on Kant and Schopenhauer, his inner life a desolate soup of nausea, ennui and masturbation. Houellebecq, for his part, achieved the status of a rock star on the back of this first creation – fans launched a magazine in his honour called Perpindiculaire, he was anointed the spiritual leader of a movement called “depressionism,” and the mainstream started its long vigil of hating him intensely. The author’s next book, released in the US as The Elementary Particles (a direct translation from the French) and in the UK as Atomised, won the 1998 Prix Novembre, although the New York Times called it a “deeply repugnant read”.

Over the next decade, Houellebecq would cement his reputation as the enfant terrible of French letters.  In 2001 his mother, who abandoned him as a six-year-old and felt she had been unfairly treated in several autobiographical passages in The Elementary Particles, released an autobiography telling her side of the story. As the Paris Review noted: “For the first and last time in his public life, Houellebecq received widespread sympathy from the French press, who were forced to concede that even the harsh portrait of the hippie mother in The Elementary Particles didn’t do justice to the self-involved character that emerged from her autobiography. During her book tour, she famously asked, ‘Who hasn’t called their son a sorry little prick?’”

Platform, also published in 2001, dealt with sex tourism, which Houellebecq appeared to condone. Many critics went nuts on this point, but more important was the book’s anti-Moslem theme, which the author wasn’t about to water down in interviews. While Platform was being released in Britain in 2002, he appeared in a Paris court on charges of inciting religious hatred. The charges arose from comments quoted in the magazine Lire that Islam is “the most stupid religion” and that the “badly written” Koran made him fall to the ground in despair.  The court, made up of a panel of three judges, acquitted Houellebecq on the basis that the criticism of all religions was protected by the principle of free speech.

Then came the 2005 novel The Possibility of an Island, a return to the whatever-ness of Houellebecq’s sensibility, except this time with bored and hedonistic rich people as the central characters. Actually, there’s only one main character, Daniel, who has two clones – the novel takes place in a dystopian future where humanity, decimated by climate change and nuclear war, has reverted to its hunter-gatherer past. But this doesn’t stop Daniel from riffing on the nature of love and sex, which he finds perpetually empty.

The Paris Review asked Houellebecq what made him imagine such a grim future, where humans are cloned before they reach middle age. “I am persuaded that feminism is not at the root of political correctness,” he said. “The actual source is much nastier and dares not speak its name, which is simply hatred for old people. The question of domination between men and women is relatively secondary – important but still secondary – compared to what I tried to capture in this novel, which is that we are now trapped in a world of kids. Old kids. The disappearance of patrimonial transmission means that an old guy today is just a useless ruin. The thing we value most of all is youth, which means that life automatically becomes depressing, because life consists, on the whole, of getting old.”

A sentiment not entirely different from that of the British author Martin Amis, who suggested earlier this year that the UK government should consider funding euthanasia booths for the aged. And like Amis, who’s never won a Booker, Houellebecq has been consistently ignored by the judges of the Prix Goncourt, France’s pre-eminent literary prize. Until 2010, that is.

At a small ceremony in a Parisian restaurant earlier this week, Houellebecq accepted the 10 euro prize (honourably symbolic, although the winner can generally expect sales of the book to reach 400,000) for his latest novel, The Map and the Territory. The theme here is again aging, and the vision is still bleak. Was the 54-year-old unmoved by the award, whose past recipients have included Marcel Proust and Simone de Beauvoir? Did he think, whatever? Apparently not. “It’s a bizarre sensation but I’m deeply happy,” he said. DM